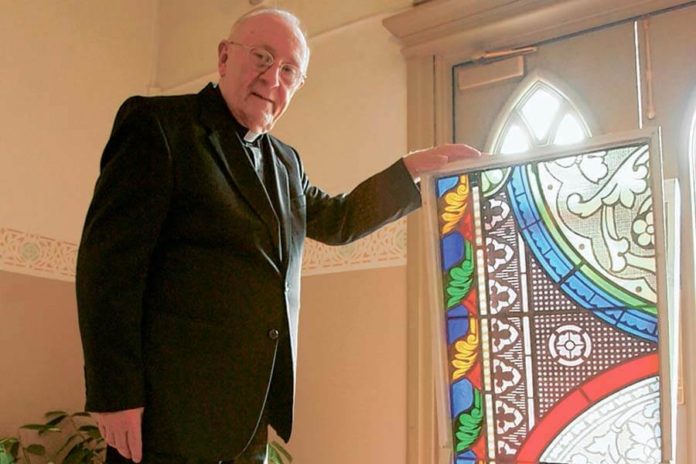 Monsignor Arthur W. Bastress, former pastor of the Shrine of St. Alphonsus in Baltimore, is shown in 2009 admiring the restoration of stained glass at the church. (CR Staff)

The Good Friday words have echoed through Monsignor Arthur W. Bastress’ soul since a medical event forced his retirement from active ministry at age 90, just weeks before his 66th anniversary as a priest of the Archdiocese of Baltimore.

Pastor of the National Shrine of St. Alphonsus Liguori in Baltimore since 1998, Monsignor Bastress has ministered throughout the archdiocese since his May 19, 1951, ordination at the Baltimore Basilica.

At various times pastor, fixer, director of the archdiocesan office of the diaconate (1980-1992) and leader of the urban vicariate (circa 1997), there was a common denominator to most of his assignments.

“Every place I ever went were places nobody else wanted to go,” he said half-jokingly in a May 10 interview with the Review at his new residence at St. Stephen’s Green, an assisted-living facility in Timonium.

“Else” being the key word.

He also keeps promises – including his priestly vow of obedience – a virtue he credits to his father, Arthur M. Bastress, who had worked his way from clerk to president and general manager of the Maryland and Pennsylvania Railroad.

“You taught us kids, ‘When you promise to do something, you do it,’” Monsignor Bastress said, gazing at a black and white photograph of his parents, one of the few non-religious items in his apartment.

The eldest of five siblings, all living, Monsignor Bastress grew up at St. Bernardine Parish on Edmondson Avenue, where he attended the now-closed parish school. He went on to what is now Loyola Blakefield in Towson and pursued priestly formation at the former St. Charles Minor Seminary in Baltimore, the former St. Mary’s Seminary on Paca St. in Baltimore, and St. Mary’s Seminary in Roland Park.

Father Spacek added that “a lot of things in his life” could have swayed Monsignor Bastress from his vocation, including a doctor friend who felt the young man would make a superb physician – and offered to pay for his schooling – “but Monsignor heard the call to priesthood and listened very intently.”

Father Spacek moved into the rectory at St. Alphonsus 16 years ago; he was a hospital chaplain then, and he and Monsignor Bastress “were like ships crossing” for the first four years, he said.

Father Spacek recalled returning to the rectory after an emergency call one evening to see Monsignor Bastress at the front door, in his pajamas, talking to “a poor, homeless person.”

“He was asking for money, and Monsignor was helping him,” Father Spacek said.

Monsignor Bastress’ charitable spirit extends to all, he added, noting that after the warming-up period, “he was probably the first pastor who ever said to me, ‘If you want to learn, I will teach you.’”

A sought-after confessor and spiritual director, Monsignor Bastress’ “face lights up when somebody calls him ‘Father B,’ or when he’s among youth,” Father Spacek continued.

“I’d be a fool if I said I didn’t miss it,” Monsignor Bastress said of St. Alphonsus. “You’ve given 19 years of your life trying to make it go, and you’ve succeeded and failed.”

His successes, including an extensive and badly needed restoration of the church’s exterior and, with Baltimore Archbishop William E. Lori’s help, establishing it as a national shrine, are numerous and go way back, but Monsignor Bastress – the sole monsignor in the archdiocese with the highest title of “protonotary apostolic” since the passings of Monsignor Arthur F. Valenzano (2015) and Monsignor Robert A. Armstrong (2017) – seems incapable of resting on laurels.

“Don’t put me on a pedestal because I’ll fall off and break,” is an utterance Father Spacek has heard more than once from his mentor.

A tall order, indeed, but Monsignor Bastress believes it possible.

“Our problem was not recognizing sooner that we had to push St. Alphonsus himself,” he said, noting that the 18th century lawyer-turned-preacher who founded the Redemptorists and later went on to become a bishop is the patron saint for those suffering for arthritis, “one of the biggest problems that everybody has.”

In fact, Monsignor Bastress has enthusiastically promoted St. Alphonsus. Father Spacek noted that when he discovered that makers of religious articles did not manufacture statuettes of the Doctor of the Church, he had them commissioned, insisting that that he be holding a crozier and his cheeks not be overly rosy.

Monsignor Bastress credits St. Alphonsus for his own lack of pain through arthritis and other ailments, including those from which he is now recovering.

“I guess it’s because I’ve suffered for him and his church, and he’s taking care of me,” he said. “I wanted to start a novena to him and change the schedule for it and everything else, but that’s when the Lord started stepping in and saying, ‘You’re not going to do anything more.’ The Lord will have his way.”

Monsignor Bastress is also devoted to St. John Neumann, who professed his vows as a Redemptorist at St. Alphonsus and later served as its pastor, and to Blessed Francis Xavier Seelos, another past pastor of the church and member of the Redemptorists.

The order named Monsignor Bastress an honorary oblate in 2009 for his promotion of the shrine, its patron and its two most famous pastors, and presented him with a mission cross.

“Monsignor touched his cross to Blessed Seelos’ cross, and that was his greatest honor,” he said.

“I grab ahold of that book,” he said, nodding at his worn copy of the Liturgy of the Hours.

He receives visitors, and, recently, phone calls from younger priests seeking his counsel.

“I think I’ve had a happy life,” he said. “There’s the good and the bad, and you take these things, but it’s the Lord that makes you happy. That’s all there is to it.”

(from: Archdiocese of Baltimore www.archbalt.org)