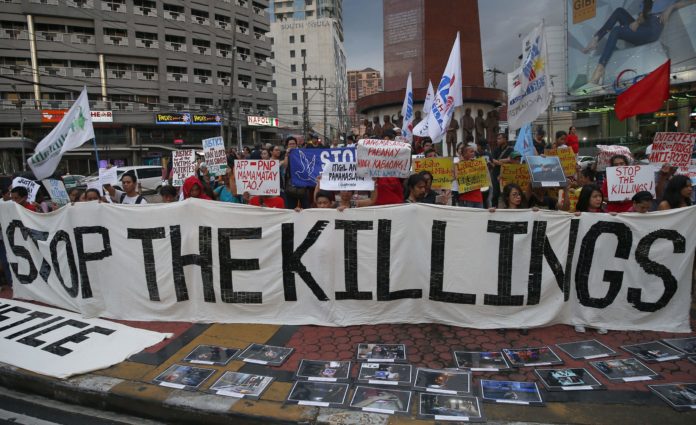 Remember, O Lord, what has befallen us;
look, and see our disgrace!
(Lamentations, 5: 1)

We, the Redemptorists of the Philippines composed of the Vice-Province Manila and Province of Cebu, express our outrage for the recent spate of killings in line with the government’s war on drugs. As missionaries dedicated to serving the poor and the most abandoned, we condemn the war on drugs as a war on the poor. Most of the victims of extra-judicial killings are poor people. The police have become more relentless as the President himself had on many occasions incited the police to carry out a murderous war on the poor and admitted that the target of his war on drugs is the poor.

On the other hand, rich drug lords and politicians coddlers of drug suppliers are given the full extent of the due process of law. 6.4 billion worth of shabu freely entered the country due to the connections of the rich drug lords to politicians and Customs officials. In all of these, there was no cry from the President and other high ranking government officials.
As Christians, we are appalled by the utter loss of respect for the dignity of life and human rights of the police operations. We are utterly distressed that in a Christian country like ours, the killings are tolerated, even supported. We dread the reality that a split-level kind of faith exists among our people. Such faith sees no connection between the gospel values and the wellspring of Christian faith and the suffering and killings of the people.

As Filipinos, we are gravely concerned with the kind of society we have become. What kind of people have we become? After more than a year of the war on drugs, our country has turned into a big killing field. Death is the order of the day. A culture of killing with impunity is the new normality. On the other hand, a culture of silence and a climate of fear prevail. In the midst of the daily killings, many people go on with their lives, show no empathy to the victims and accept the government war on drugs as a necessary evil.
Condemning the war on drugs does not undermine our stance against the drug. Even before the Duterte government, we have denounced the menace of drug addictions in our proclamations and programs. We did not just denounce, however; we also organized programs and services to victims of drug addiction like counselling, livelihood projects and community support mechanisms.
We call on the government to respect the law and uphold life. We call on the government to stop the killings. The “war on drugs” which in reality is a war on the poor has to end. Now!
We call on the church to defend the sanctity of life during these dangerous times. We call on all the people of goodwill to assist the poor victims of the drug war and participate in building programs to counteract the evil effects of drug addiction.
Our Mother of Perpetual Help, pray for us that the spate of killings in our country may come to an end!