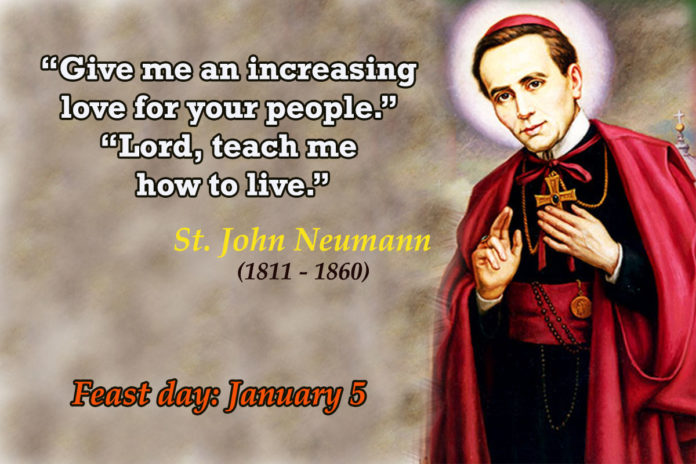 John Nepomucene Neumann CSsR (Czech: Jan Nepomucký Neumann, German: Johann Nepomuk Neumann; March 28, 1811 – January 5, 1860) was a Catholic priest from Bohemia. He immigrated to the United States in 1836, where he was ordained and later joined the Redemptorist order and became the fourth Bishop of Philadelphia (1852–1860). He is the first United States bishop (and to date the only male citizen) to be canonized. While Bishop of Philadelphia, Neumann founded the first Catholic diocesan school system in the United States. He is a Roman Catholic saint, canonized in 1977.

Father Neumann was a tireless missionary, busying himself in particular with the German immigrants, first in Baltimore, then in Pittsburgh. At the age of 42, he was named bishop of Philadelphia. In the 2 years that he founded the schools, the number of students went from 500 to 9000. He also founded a new religious institute: the Sisters of the Third Order of St. Francis. In the brief space of 7 years, he built 89 churches, as well as several hospitals and orphanages. On January 5, 1860, he died suddenly of a heart attack on a street in Philadelphia. On the occasion of his canonization, Paul VI summarized the activity of the new saint with these words: “He was close to the sick, he loved to be with the poor, he was a friend of sinners, and now he is the glory of all emigrants.