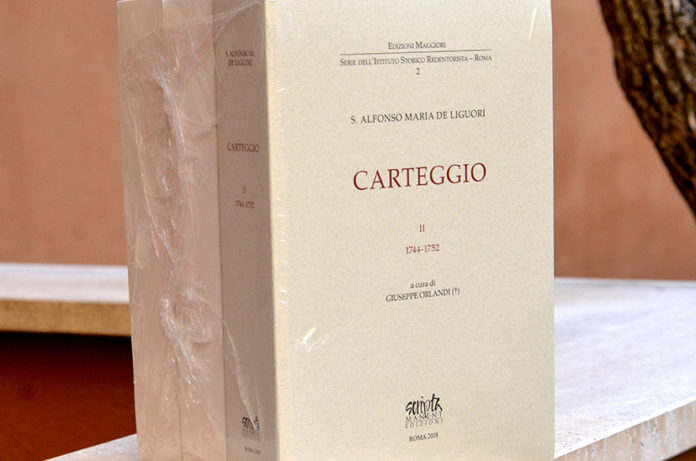 The Redemptorist Historical Institute has published the second volume of the “Correspondences” of St. Alphonsus in the Italian language. This volume has had a long and tortuous editorial history.

According to the initial project, the new edition of the letters of St. Alphonsus, with the relative answers of the interlocutors, provides for ten volumes. The deceased Fr. Giuseppe Orlandi (1935-2013), manager and curator of this work, had begun work at the beginning of the nineties of the last century, publishing the first volume in 2004. When the fatal disease hit him in 2013, the current volume was in advanced preparation. Some members of the Historical Institute, after the death of Fr. Orlandi, have finished this work respecting the chosen methodology, dedicating this posthumous volume to it.

The present text has a capillary importance for the history of our Redemptorist Institute. The letters reported here cover the period ranging from the election of Saint Alphonsus to the Superior General of the Institute (1744), to the Pontifical approval (1749) and reconstruct the epistolary path for the request of royal approval attempted at the Bourbon court of the Kingdom of Naples (1747).

A further fact that can be grasped by the reading of these letters is the vitality of the Congregation. We are faced with a small number of Redemptorists, yet in addition to being totally immersed in the missionary apostolate, they begin to structure the internal life with the birth of the novitiate and the studentate. It is possible to follow the movement of the places of the formation houses between Ciorani, Deliceto and Pagani, as well as the numerical growth of the members of the new religious family. Also from the reading of this correspondence, we know that between 1750 and 1752 our confreres preached 117 popular missions, in addition to the renewal of spirit and 25 courses of spiritual exercises. The wealth of this volume is given by the 138 letters written by St. Alphonsus, from the 165 letters received by Alphonsus, for a total of 303 letters.

We hope that the reading of these letters by the young generations of Redemptorists can help them appreciate their roots.