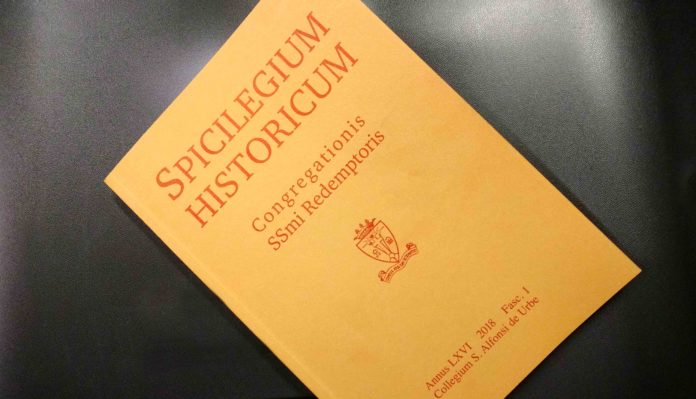 (Rome, Italy) – “Spicilegium Historicum” of the Congregation of the Most Holy Redeemer “for the year of 2018 is published. This is the first issue of the half-yearly publication, (Vol. 1, Year 66, 2018), from the Historical Institute of the Congregation as Fr. Adam Owczarski as its director.

“Devotion to Our Lady of Perpetual Succor and Islam,” by Fr. Terence Kennedy CSsR

The article, Devotion to Our Lady of Perpetual Succour and Islam, by Terence Kenndy, C.Ss.R. begins with the propagation of the devotion to Our Lady of Perpetual Help in Asia after II World War. Mary has an important place in Islam. The attitude of the Church toward Muslims has changed when it comes to the understanding of Salvation in and through Mary and Jesus. One fact is little known: the rejection by Byzance of the Copts and the Nestorians favoured the number of conversions to Islam. Mary is seen as a bridge between Christians and Muslims. Still, the Islamic “devotion” toward the Theotokos (mother of God) does not match the understanding of the “Word made flesh”, the very heart of Christianity.

Pastoral care of the Redemptorists of Svatá Hora among the war refugees in Pribram (German), 1914-1918, by Daniel Mandzak CSsR

The article tells the stories of refugees from the First World War in Pribram (now the Czech Republic), a situation that began in the autumn of 1914 and lasted until the end of the war.

The lack of basic foodstuffs and raw materials, and the lack of funds needed to assist families were the main reasons for the discontent towards refugees.

Providing material assistance to refugees was very difficult. No less important was the spiritual support for these miserable people, not to lose the meaning of life, the good faith and the hope that all their suffering will end and will be able to return to their homes. It is precisely this task that the Redemptorists of Sava Hora hang on themselves. They welcomed refugees, celebrated the sacraments, encouraged with words and when it was possible they also helped materially. All the confreres had committed themselves in this apostolate among the refugees, despite the difficulties, also from the language, their work was significant and produced positive fruits.

The article, First Redemptorist Bishop of Surinam, Jan Swinkels, (1810-1875), by Joop Vernooij, C.Ss.R., gives an account of the life of Fr. Jan Swinkels, the first Redemptorist Bishop of Surinam. He contributed many members to the Redemptorists and other orders. Ordained a diocesan priest in 1834 he worked successfully in education and became Rector of the Latin School of Helmond. In 1845 he became a Redemptorist and laboured on missions and retreats in Holland and Belgium. He was the first superior of the Amsterdam community, Vice-Provincial in Holland and Provincial of the Dutch-English Province 1854-1865. Fr. Jan is the first Redemptorist to venture on the foreign missions. As Vicar Apostolic in Surinam 1866-1875, he marked a turning point in Redemptorist history. The article recounts how he started the new type of apostolate, the tensions between being a bishop and religious superior, the influence of Father General in Rome and his meticulous attention to the Rule. He led the missionaries in the process of inculturation.

The article is a summary of the book “El P. Federico Grote, a Misionero entre los Trabajadores” by Roberto Etcheverry C.Ss.R. (Buenos Aires, 2017) and clearly presents the main points of the biography of the Redemptorist priest (1853 – 1940), his missionary vocation, his arrival in Argentina, his residence in Salta and Buenos Aires. It also presents the social reality of this South American country in the period 1880-1903 and the spirit in the foundation of the Workers’ Circles, announcing bright thinking of Leo XIII’s ‘Rerum Novarum.’ It had an extraordinary impact on public opinion. Many workers’ achievements were accomplished thanks to his struggles and his commitment. From the beginning, these Circles made formation groups for study and complete development, passing from political formation to music and Christian formation. He was a missionary among the workers who left a great contribution in the Catholic and working Argentina. He became an example for many Christians in the commitment to social justice even in our day.

These three works in Sicilian dialect were not commissioned, but were spontaneously composed by three storytellers: Filippo Salvia of San Cipirello (PA) in 1909, Vincenzo Biondo di Cinisi (PA) in 1913 and Liborio Dia d’Alcamo (TP) in 1924, who wanted to immortalize the work of transformation carried out by a group of Redemptorist missionaries for the benefit of the inhabitants of these three countries.

In the chronicles we find that the missionaries were always welcomed with great enthusiasm, the preaching was fervent. It tells of the testimonies of people asking for forgiveness and conversions. It explains what was called the Sicilian method of missions and the Neapolitan method.

The demands of the missions were increased so much that in 35 years they preached 159 missions without calculating what was done in the Marian months, months of the Sacred Heart, the novenas and other preachings.

Louis de Buggenoms writes about the history of Redemptorist foundations in England and Ireland. Details of the departure to England and arrival at Falmouth. The foundation of Clapham, here is the story in 1848. The foundation of Limerick and the amount of early work done by the missionaries at the beginning of community life in these places.

The preaching of the Gospel, the first missions, the assistance to the poor, the teaching at school, the organization of communities with other religious orders, the help of the sisters, the volunteers for medical assistance in some mission places, etc. cases and things that are told only when one tells his life in the missions.

The memories told here by the author are full of an Alphonsian spirit in service to the little ones and hungry for the Gospel. At the end, we can feel how the grace of the Redeemer has always been the strength in the commitment of the first missionaries who gave birth to the Redemptorist communities in England and Ireland.