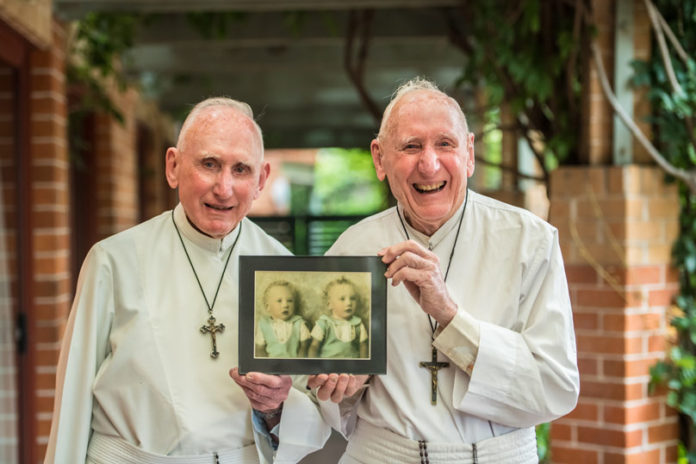 Identical twins, Fathers Patrick and John O’Neill CSsR, were both present when the Sydney Harbour Bridge was opened in 1932. But they have no memory of the momentous occasion: they were only six weeks old at the time.

The 86 year-old brothers do remember, however, being ordained to the priesthood together at the Redemptorist monastery in Ballarat some 60 years ago, on 16 March 1958.

Despite the fact they had both felt called to the priesthood from an early age, the twin brothers never discussed it with each other. They “just knew” they were meant to be priests.

“It’s the mystery of vocation,” Fr Patrick said. “Why did I want to be a priest? I don’t know. But I know it’s been a very happy life. I wouldn’t do anything else.”

“I always wanted to be a priest,” Fr John added. “Always.”

While growing up in Goulburn with their six brothers and sisters, Frs Patrick and John say they had a “wonderful” education from the Mercy Sisters during their primary school years, and the Christian Brothers at secondary school.

They entered the Redemptorists’ minor seminary together at Galong when they were just 15 years old. Later they went on to the novitiate at Pennant Hills and then the seminary in Ballarat and Mayfield.

During their novitiate years, the teaching staff decided that there could only be one vocation between the two of them and set about trying to determine which twin had the vocation.

“We were like two peas in the same pod,” Fr John said. “We couldn’t both have a vocation. So they said ‘we have to separate them to see who’s got the vocation’. I was promoted to a higher class, he was put down a class.”

But it was all to no avail. Both young men were clearly being called to priesthood.

“There was no reaction so they put us back where we belonged. We finished up back in the same class,” Fr Patrick chuckled.

It was soon after ordination that the brothers truly went their separate ways. After studying together in Rome Fr John returned to Australia to teach in the seminary while Fr Patrick stayed on to continue his course in moral theology.

The twins took the separation in their stride. When their ways finally parted in Venice it was far from the traumatic event that others warned them it would be.

Over the ensuing decades Fr John was sent on mission work in parishes all around Australia which he considered the most important part of his vocation as a Redemptorist priest. “You’re doing what you want to do, which is making the Lord known. A bit like the Apostles,” he said.

He eventually felt called to undertake missionary work in Africa and served at the Redemptorists’ mission in Burkina Faso for almost 22 years, only returning home after suffering a stroke in 2007.

Meanwhile Fr Patrick served in a variety of roles for the Redemptorists including teaching, accounting and farm work at the minor seminary in Galong. But it was the three years of mission work in Townsville that he says were the “best years” of his life. Mission work has been the highlight of his vocation, he says. “That’s what we were ordained for.”

When Fr John suffered the stroke in Africa, Fr Patrick flew to Rome to meet his brother there and bring him home to Australia. And so the brothers were reunited once more.

They now live together at the Redemptorist community in Kogarah.

As they prepare to celebrate their Diamond Jubilee on 16 March, Frs Patrick and John say they can see that God’s hand has been guiding them all the way.

Fr Patrick struggles to explain how as young men they decided to become Redemptorists—a religious order they only heard about six months before they entered.

“How do you explain that? It’s the mystery of vocation,” he said again.

“God is in charge,” Fr John said. “If you just follow what he wants that’s it. He knows where you are, you don’t have to make plans. Just wait until those that need you, want you. That’s about it. The marvelous thing is that there’s somebody upstairs looking after all this.”