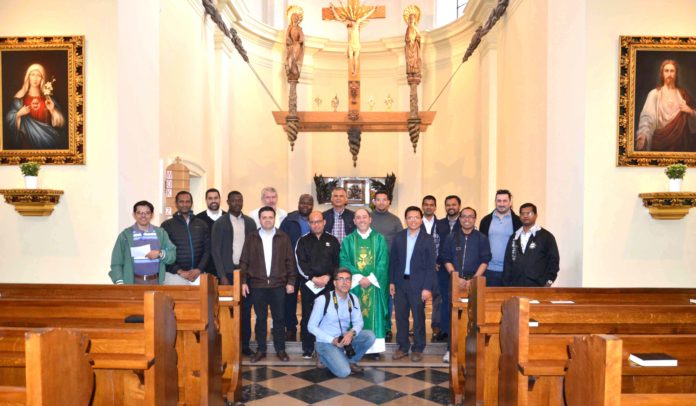 (Rome) The students of the ‘Collegio Maggiore,’ Rome together with some of the confreres from St. Alphonsus House, Rome, went on a pilgrimage from 30th June to 11th July 2018 to Poland, Czech Republic, and Austria. The pilgrimage is organized every alternative year so that the confreres studying in different universities in Rome, get an opportunity to visit the birthplaces of the Redemptorist Saints like St. Clement Hofbauer and St. John Neumann and the places where they lived and witnessed to God’s love in serving the most abandoned. 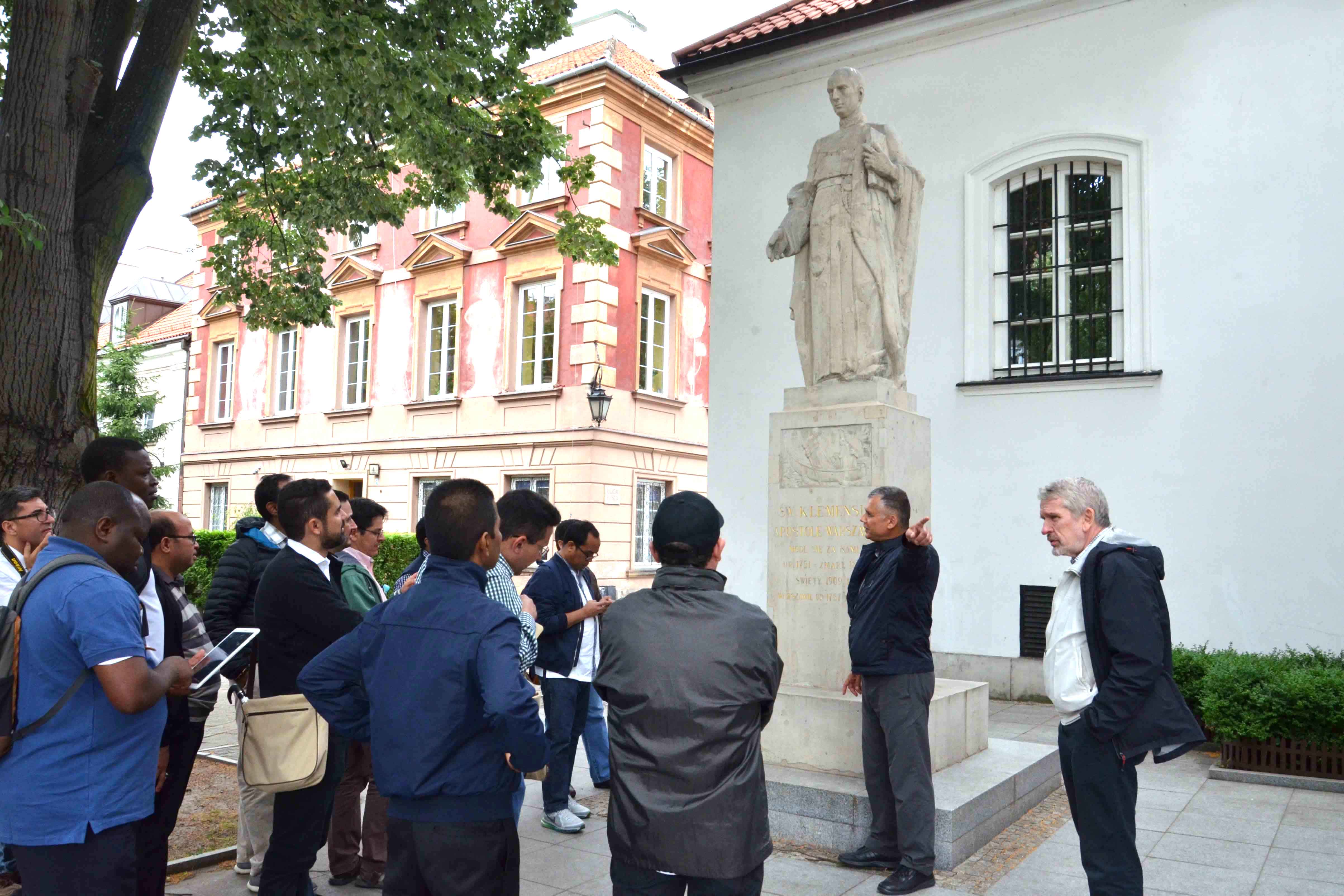 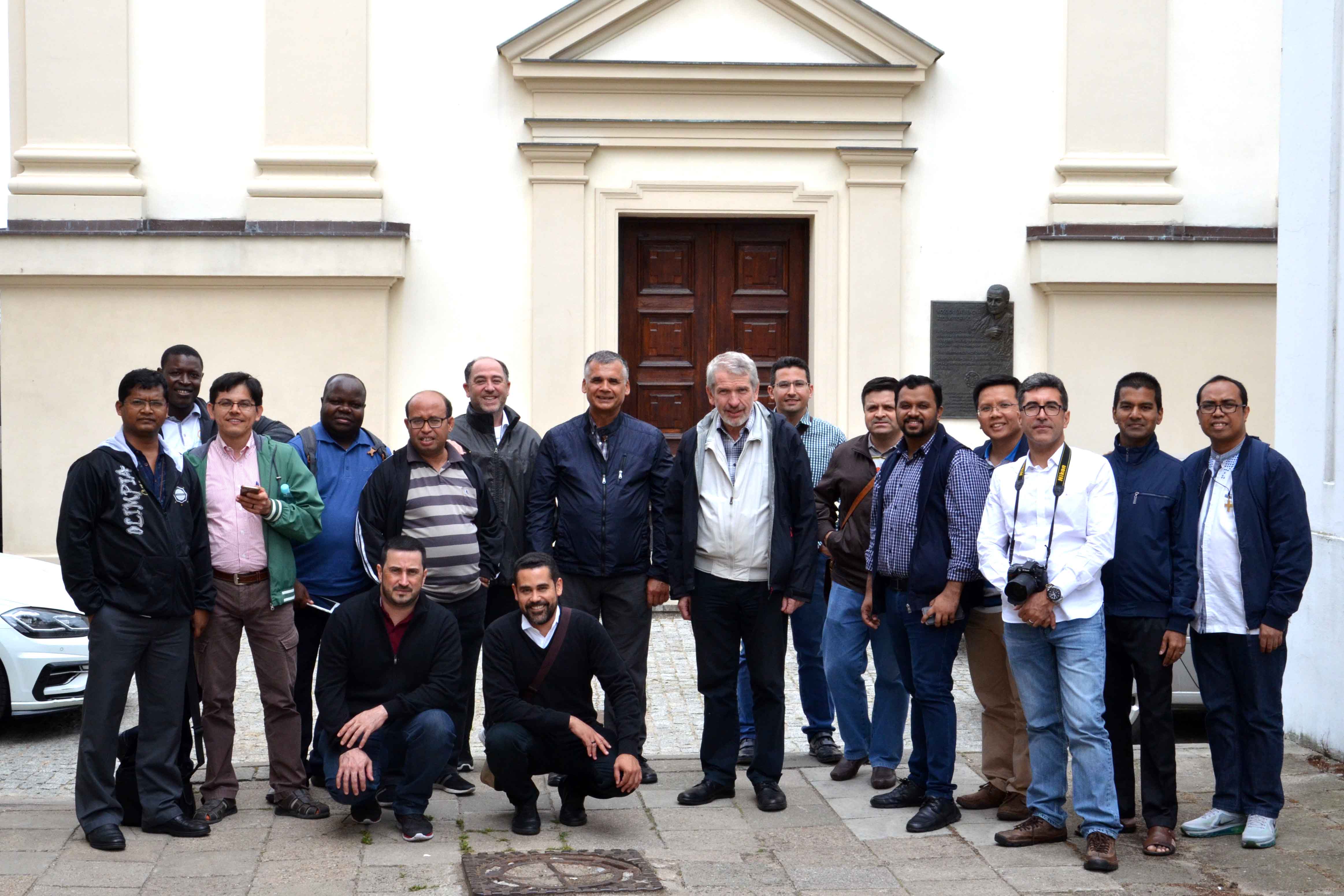 All the confreres left the house at 6.30 am on the 30th of June as scheduled for the airport. We arrived at our community at Karolkowa 49, Warsaw, Poland at around 12 noon. After the lunch, we left for St. Benon, the first community of the Redemptorists. After the refreshment, we went to the town visiting the Square and the cathedral nearby. It was a surprising moment to see the developments that have taken place after the second world war and the destruction by German troops. After about two hours of visiting we returned back to the community at Karolkowa 49. We had mass in the evening and ended the day. 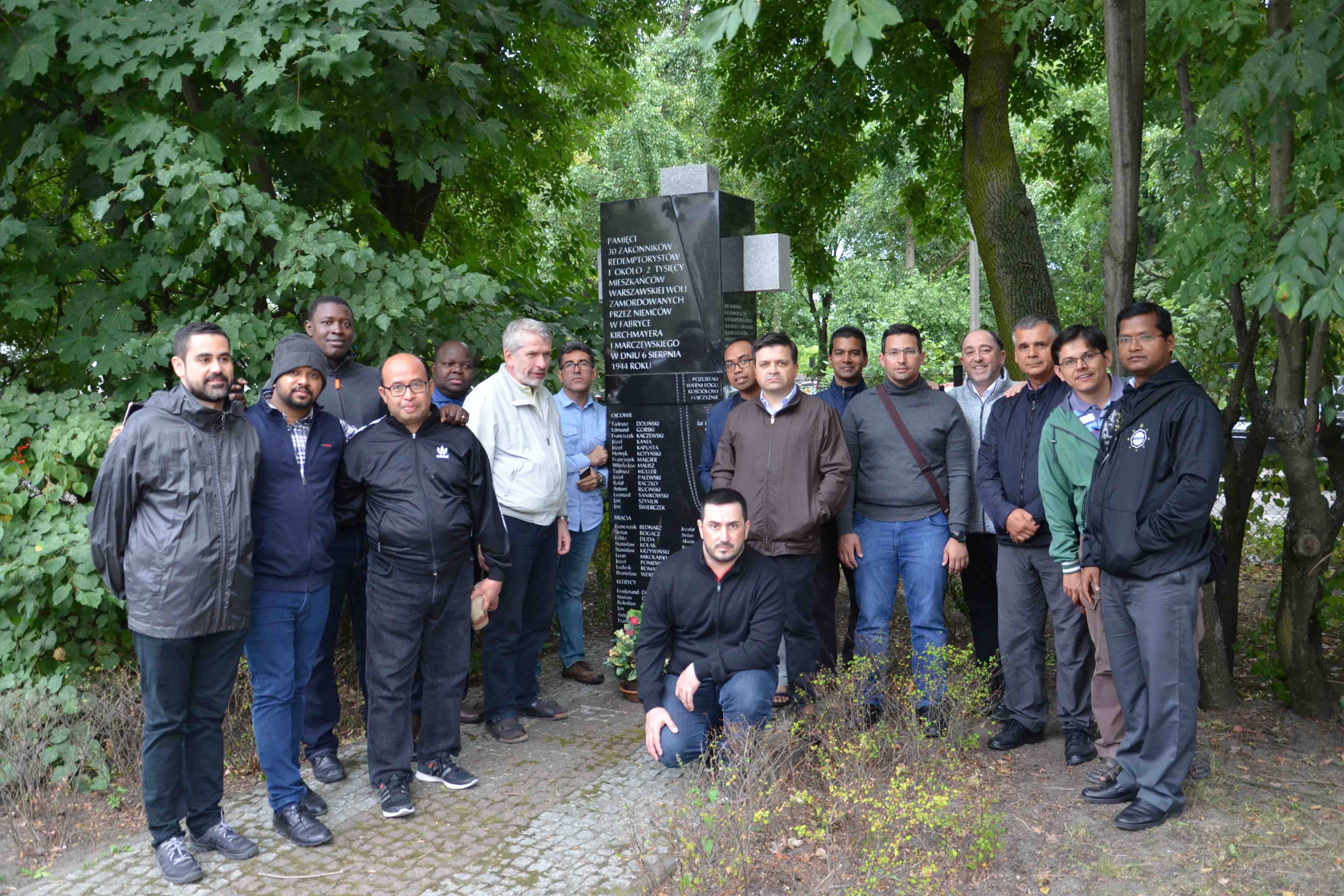 We left for the first community at St. Benon in the morning at 8.00 am on the 1st of July. Being Sunday we had solemn Eucharistic celebration presided over by Fr. Alberto (the general consultor). Then we visited the community chapel which is below the church. Then we explored the Royal Palace in the city. In the afternoon we visited the Church of St. Anny and the park nearby. In the evening we visited the monument of thirty Redemptorist martyrs. Soon after the morning prayer and the mass we visited the Royal Park of Łazienki on 2nd of July. We spent the whole morning admiring and wondering about the beauty of nature. We travelled to Żelazowa Wola – the birthplace of Federico Chopin – Polish composer and visited Brochow, the Church of St. Roch and John the Baptist where Chopin was baptized. In the evening we spent time with the community watching football.

We packed our bags and left for Krakow soon after the mass and the breakfast at around 8 am on 3rd of July. It was a long journey. On the way, we visited Częstochowa – Sanctuary of the Black Madonna. Then we continued our journey and reached our community at Krakow at 5 pm. Then we went out to the city with Fr. Janusz Sok, the Provincial of Warsaw Province for a supper out at 6.30 pm. 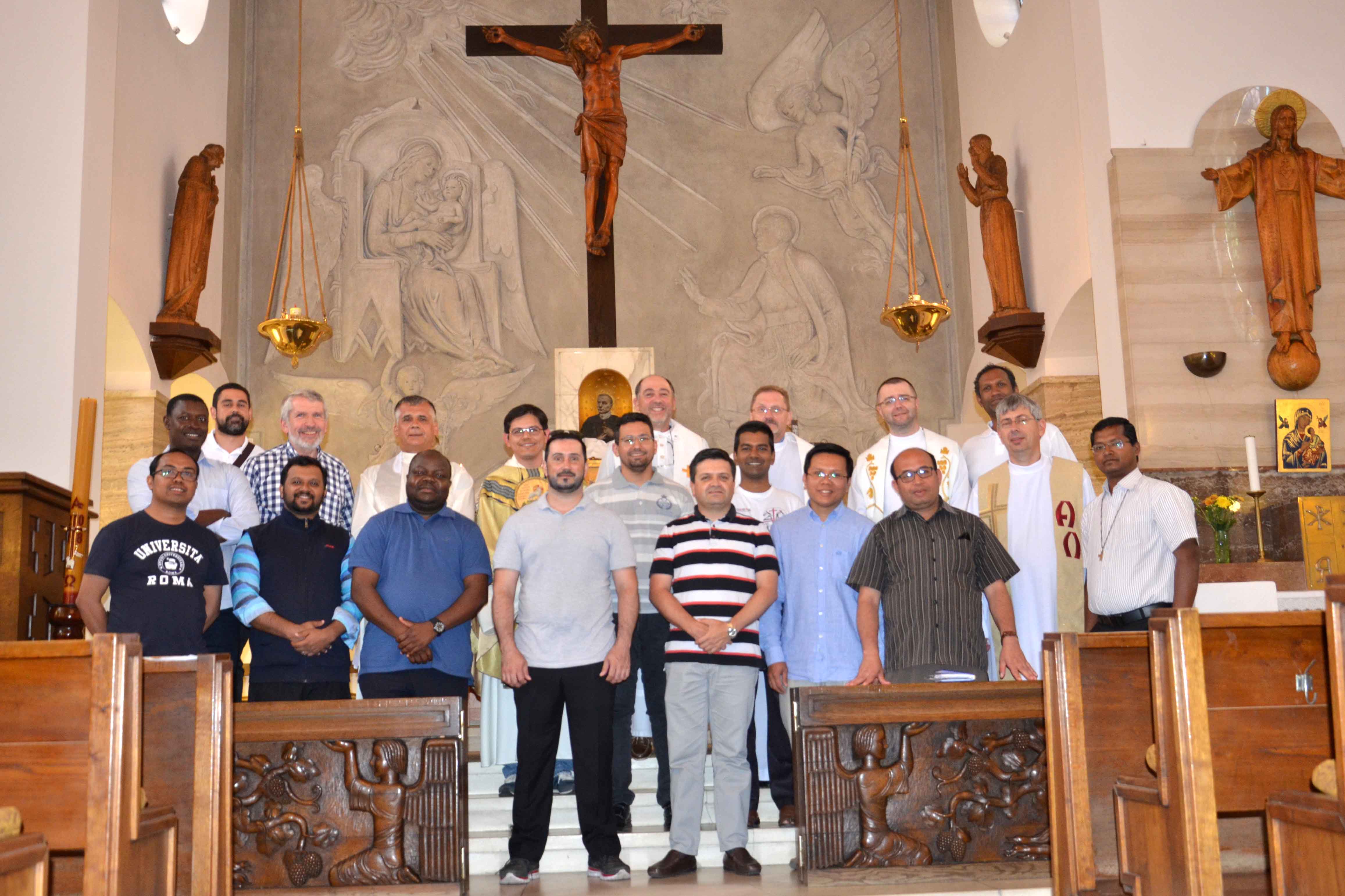 On the next day, we visited the salt mine. Prior to that, we had mass and morning prayer. We spent exploring the mine till noon on 4th of July. Soon after the lunch, we visited the Divine Mercy Shrine, Museum and tomb of St. Faustina. We also visited the centre of St. John Paul II. We then visited the castle and the cathedral and the Krakow city. After an hour and a half going around the city, we walked back to our community.  In the evening some of us visited the old Jewish town.

We left the Krakow community after the Mass and the breakfast on 5th of July at 8 am. While travelling we prayed the breviary. We visited the hometown, the birthplace of St. John Paul II in Wadowice. Then we travelled to the German concentration camp at Auschwitz. We spent about three hours learning how people lived in the camps and Barracks. We too visited the cell where Saint Maximilian Maria Kolbe lived. We had lunch at 3 pm and then left for our community at Bardo and reached at 6.45 pm. Then we went out with the Rector Fr. Mishek for supper. 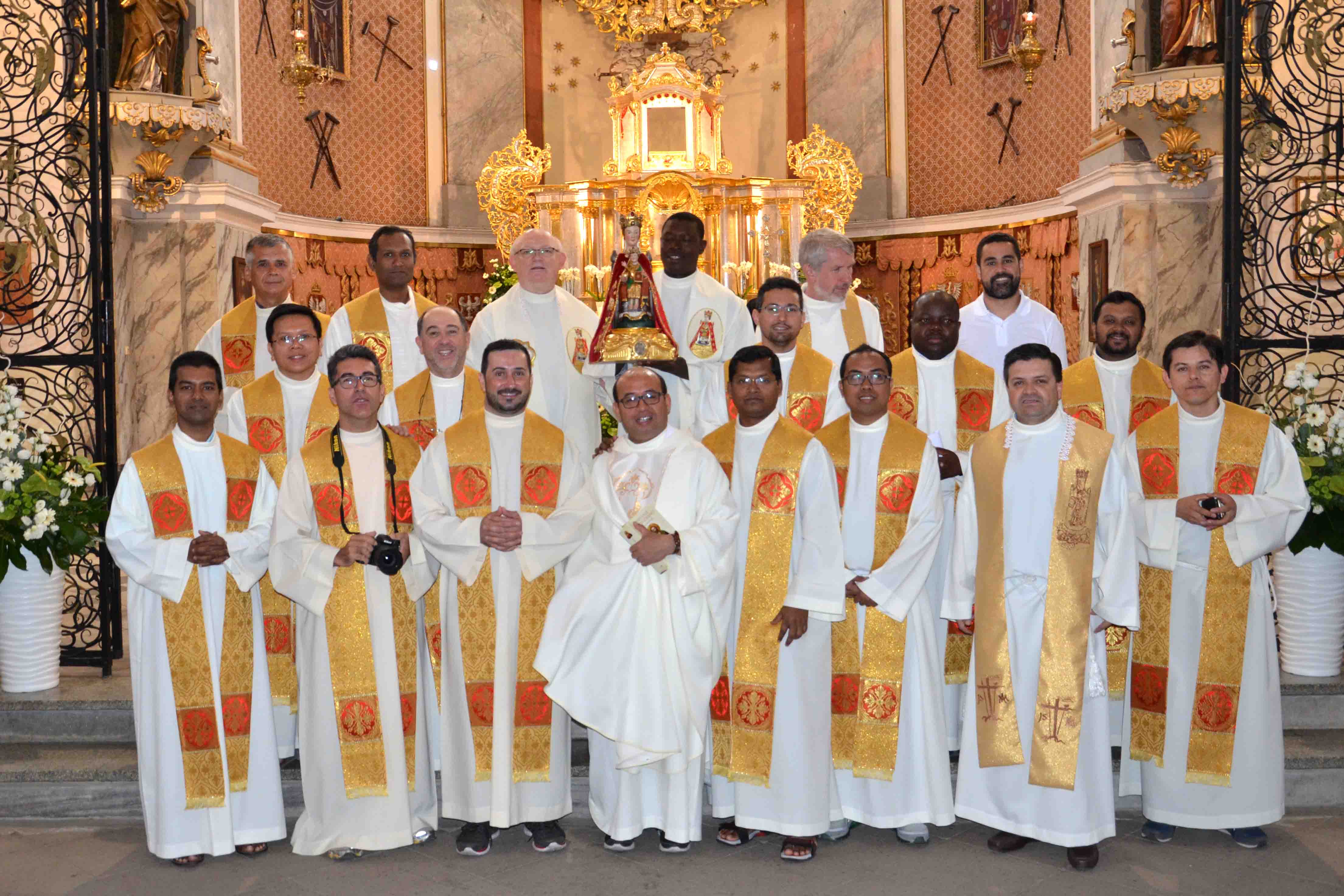 On the following day, we had mass with the community and the faithful. After the mass, the parish priest Fr. Mirek (Miro) explained about the Madonna of Bardo and we were blessed by venerating the Madonna and the relic. After the breakfast, we departed for the Czech Republic and prayed our breviary in the van at 8.45 am. We reached Svatá Hora near Příbram. More than a century ago Pope Pius X bestowed Svatá Hora (meaning Holy Mountain) with the title of basilica minor. We lodged in the Diocesan run apartment which was earlier under the Redemptorists. Fr. Peter accompanied us to visit Educational Institute at Obořiště 1, beside the Church of St. Joseph, which was once Redemptorist Seminary and now the Redemptorists look after the Church. We visited Svata Hora (Holy mountain) in the evening. After supper, we relaxed and watched football in the community.

We visited Prague, the capital of the Czech Republic soon after the mass and breakfast on 7th July at 8.45 am. We visited the Cathedral of St. Vito and the Church of St. George then went to Charles Bridge, Iconic 14th century structure. We had lunch and then free time till 5.30 pm and then returned to Svata Hora for the night rest. 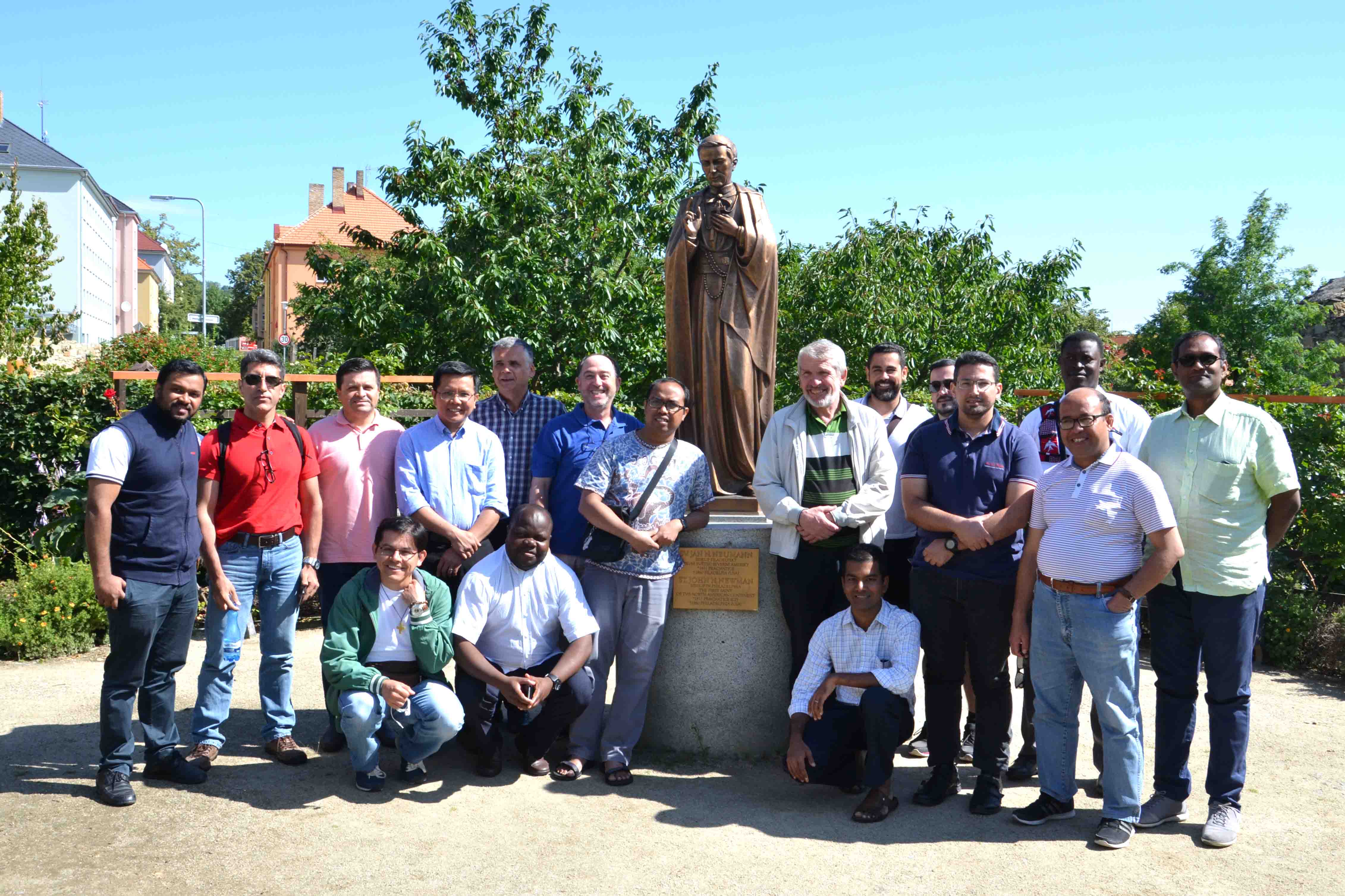 Soon after the mass and the breakfast we left for Prachatice, the birthplace of St. John Neumann on 8th of July. We spent the day visiting the little garden beside the home for the aged of St. John which is run by the sisters of St. Charles Borromeo, the church where St. John was baptized and the museum in front of the church.  After lunch, we visited Český Krumlov, a city in the South Bohemia region of the Czech Republic. It’s bisected by the Vltava River and dominated by its 13th-century castle. On our way back we stopped near the lake, Blizsi Lhota, the border of Austria and Czech. Then returned back to the Prachatice in the evening. 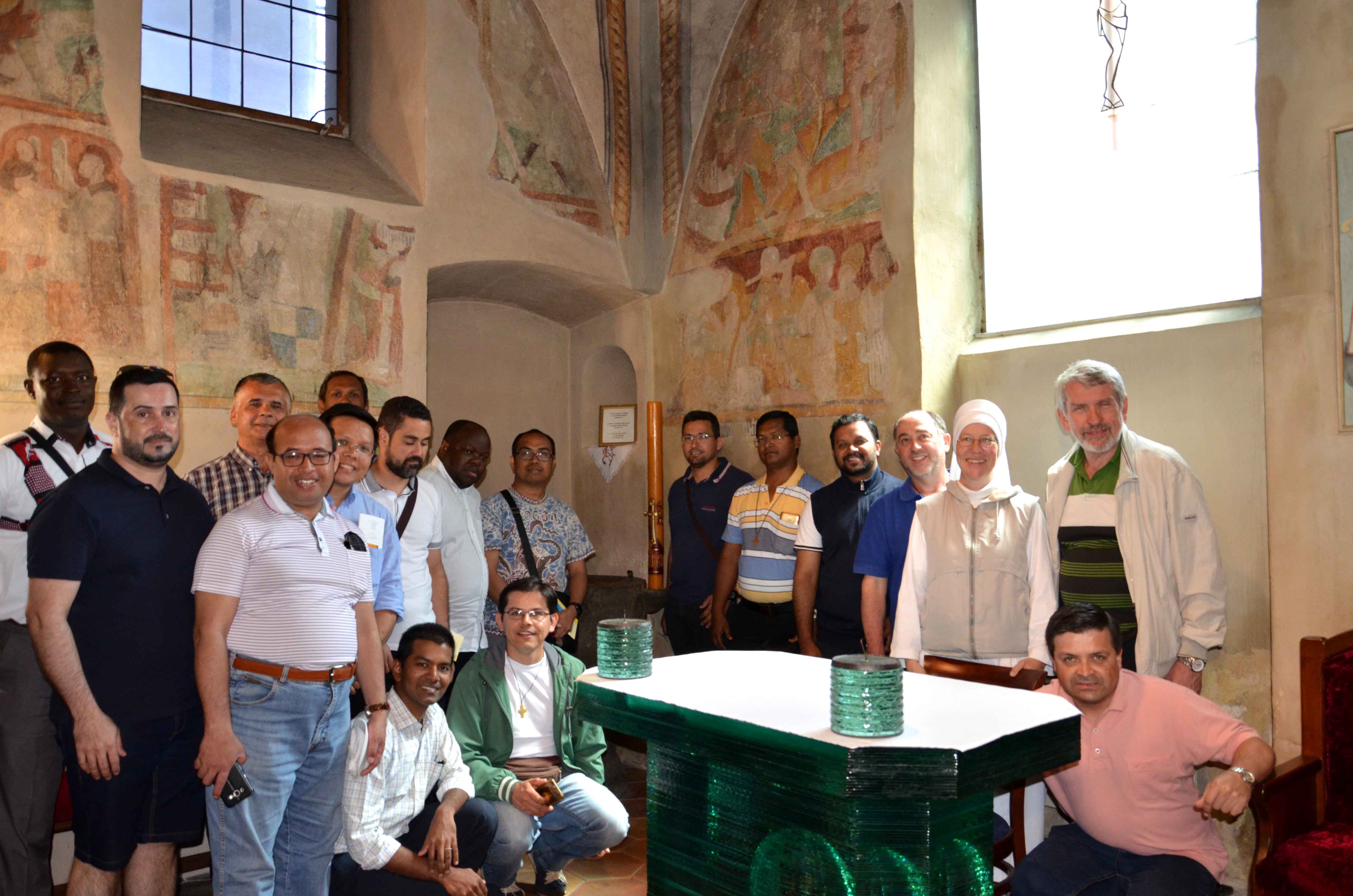 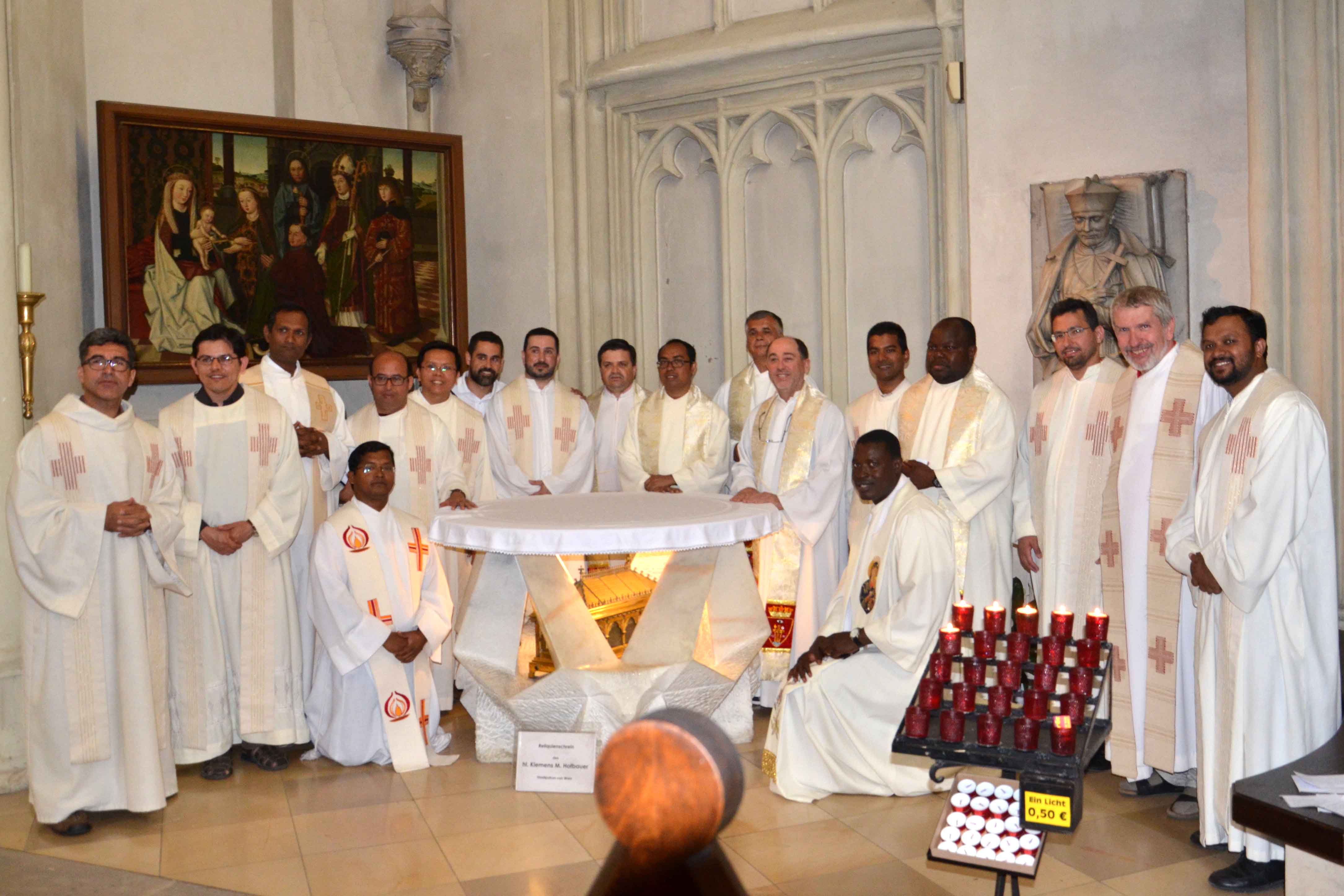 On the second last day, we spent the day visiting Vienna, the places where St. Clement had spent his life. After the breakfast and prayer at the residence, we went on foot to St. Dominican Church and the Old University where St. Clement studied. Then we went to our community at Salvatorgasse 12. After the snacks and refreshment, we had holy mass at the small altar where the relic of St. Clement is kept in the Church Maria am Gestade. Then some of us climbed the bell tower of the church and some remained in the church. We had meals together with the community at 12.15 pm. In the afternoon there was heavy rain for about an hour and a half so we delayed returning back to our residence. All reached according to their conveniences. In the evening we visited another community which has a parish church named Marienpfarre with 5000 Catholics. The former provincial Fr. Lorenz Voith welcomed us into the church and gave a small introduction about the Church and the work fathers do which was translated by Fr. Adam in the Italian language. We had evening prayer in the church followed by the veneration of the relic of St. Clement. Then we had supper with the community at 8 pm. Frs. Anoop and Geo visited the confreres from Liguori Province. 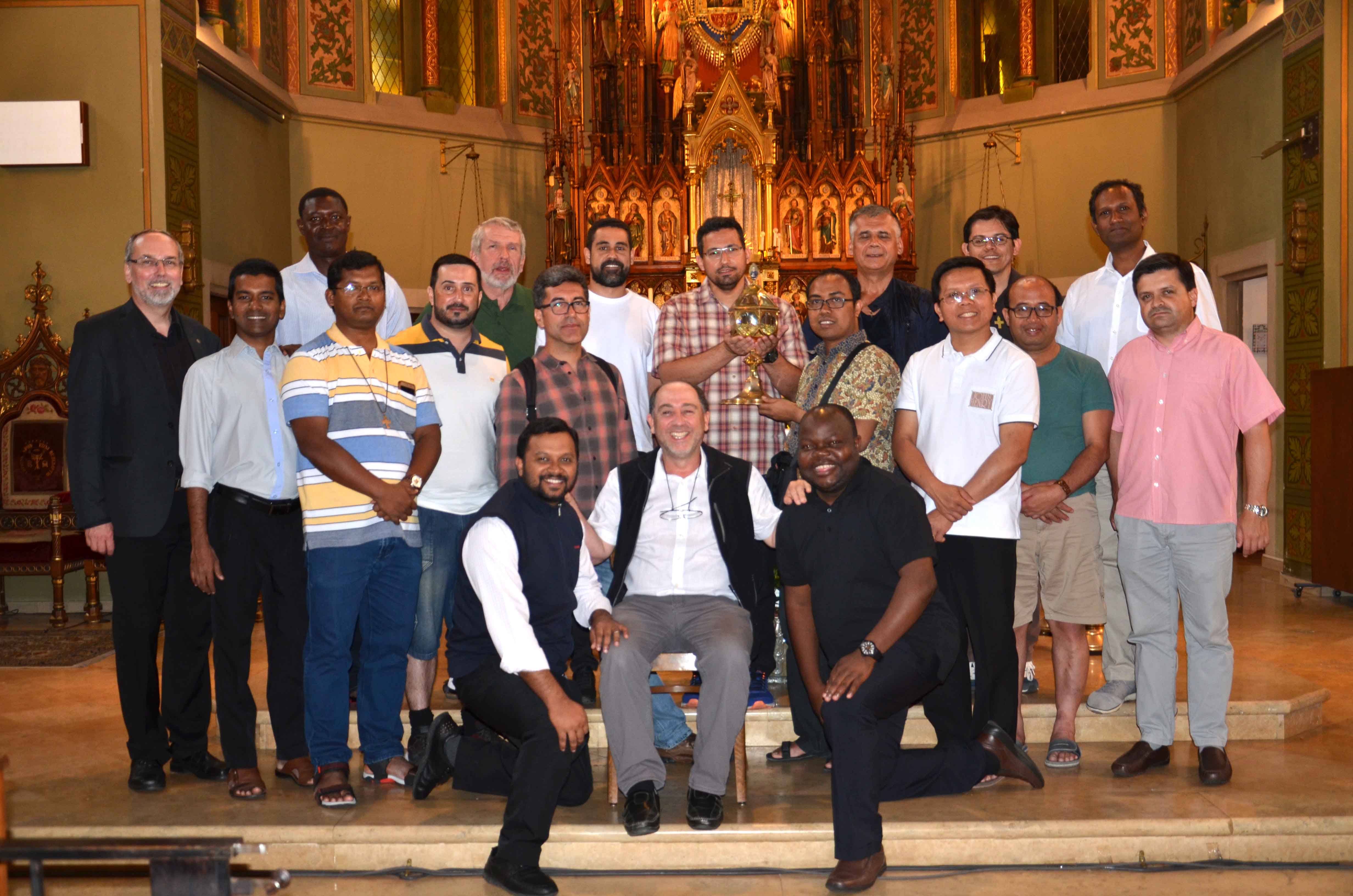 After the mass and the breakfast Fr. Martin had to leave the group to continue his ministry. We visited the city, the palace, and the places where St. Clement ministered. We visited Vienna Minoriten church, St. Anne’s Church and Capuchin Church. After the lunch Fr. Adam returned to his community at 1 pm. Then we were left to visit Vienna by ourselves in the afternoon. We left for Vienna airport at 6.15 and reached Rome at midnight. All were happy and healthy and returned back safe. 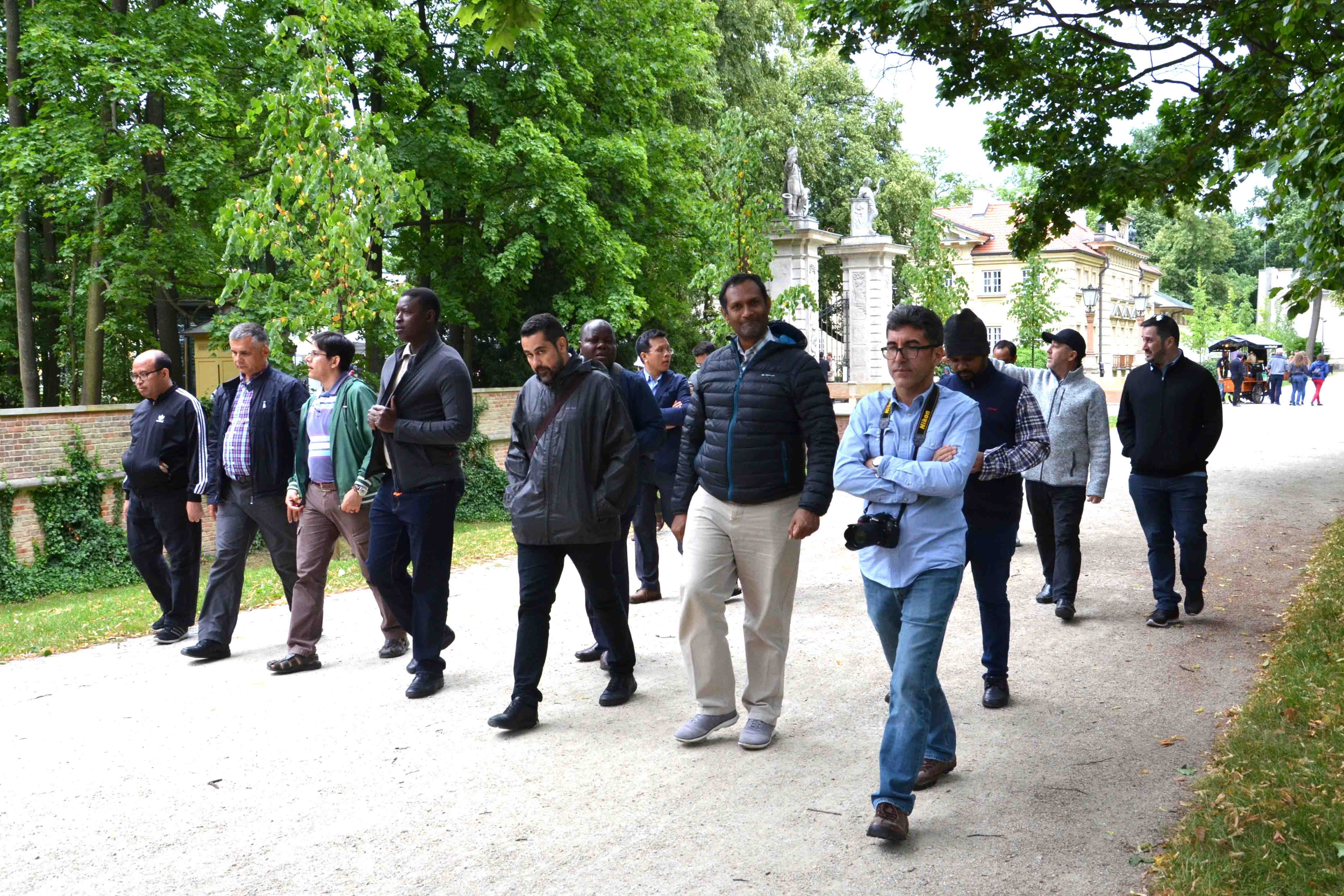 It was really a wonderful experience for all of us during this pilgrimage. We were together for all the activities and programs that helped us to know each other better. More than just visiting the places we were inspired and enlightened by the lives of Saints and witnesses of the Redemptorists. We thank God for guiding and protecting us all throughout our journey. We too thank Frs. Martin and Adam for all the arrangements and accompaniment and more so helping us to imbibe the spirit of Saints and martyrs.