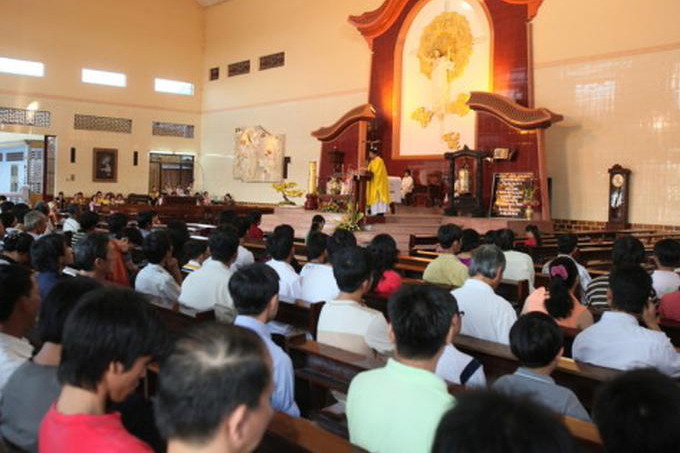 (Ho Chi Minh City, Vietnam) Some 43 young people were welcomed into the Catholic community before Easter in Ho Chi Minh City (Saigon), including 23 who were baptized three days ago in Tân Việt parish. Over the past three months, especially during Lent, these youth took part in intensive lessons on the catechesis and religious life. In their journey of faith, the catechumens received the spiritual support of all the parishioners, who urged them to become a tool of evangelization in society.

During the celebration of their baptism, Fr Dominique Vũ Ngọc Thủ, vicar of Tân Việt, told them: “After learning the teachings of the catechism and the Gospel, you recognized God’s love. You came to him to follow him and bear witness to his love in the world.” At the end of the service, the newly baptized thanked the priests, catechists and faithful who explained the Catholic faith to them and accompanied them in their prayers. At Lent every year, the Redemptorist Fathers of Saigon organize several catechism courses for children, adults, couples, and catechumens. This year, thousands of people took part in spiritual retreats and moments of prayer, which the priests held in various parishes within the archdiocese. Many young people also joined a number of charitable initiatives.

Nearly 1,000 children participated in a retreat held between 8 and 10 April, including 20 from a group of 29 catechumens who were baptized on 7 April at the Redemptorist Centre. During the service, Fr Joseph explained to them: “Today, with the seal of baptism and the sacrament of confirmation, you have become aware that the sign of Christians is the sign of the Holy Cross […]. “This,” he went on to say, “is the sign of God’s love for us. Especially you, 29 catechumens, should know how to always live according to the Word of God. We follow the sign of God’s love, so as to bring it to the brothers and sisters who surround us.”

Ministry for and with young people among our apostolic priorities

Catholic mission an island of safety in Thai capital