(Philadelphia, USA) – Fr. Charles Vijay Kumar’s “Who is My Neighbor?” documentary film debuts during the inauguration of the National Shrine of St. John Neumann in Philadelphia on April 30. Several more screenings also are scheduled: in New York on May 1-4; and on the Liguori campus on May 6. 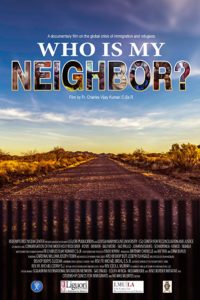 Fr. Vijay hopes to raise awareness and build a positive Christian response to the global crisis of immigration and refugees. According to the United Nations, there were 244 million migrants and refugees worldwide in 2015.

Filmed in more than 20 cities/towns across nine countries, the documentary explores the complexity and unimaginable expanse of the crisis. Viewers learn about the factors that forced refugees to flee from their homes, the treacherous journeys they face and their struggles to find security and a new beginning in foreign lands. Equally as important, the film spotlights the people who provide them with support and hope.

Visit https://www.whoismyneighbormovie.com/ for more details and information about hosting a screening.