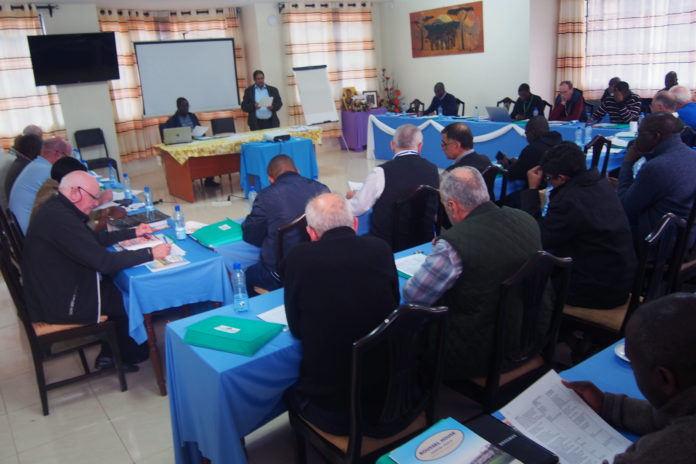 (Nairobi, Kenya) The Mid-Sexennial meeting of the Conference of Africa-Madagascar was held from July 31 to August 7, 2019, at Donum Dei Center, Nairobi, Kenya.

The Very Rev. Fr. Michael Brehl, the Superior General, Rev. Fr. Nicolas Ayouba, the Consultor General attended the meeting along with Fr Zephrin the Conference Coordinator and 22 confreres who are the members of the Africa-Madagascar Assembly. So too was the COREAM Lay representative, the Vice-Economo General and two Notaries. Prior to this meeting, there was the Networking meeting with the Major Superiors of Mother Provinces of Africa-Madagascar. Fr. Zephirin welcomed the confreres to the seven days meeting. 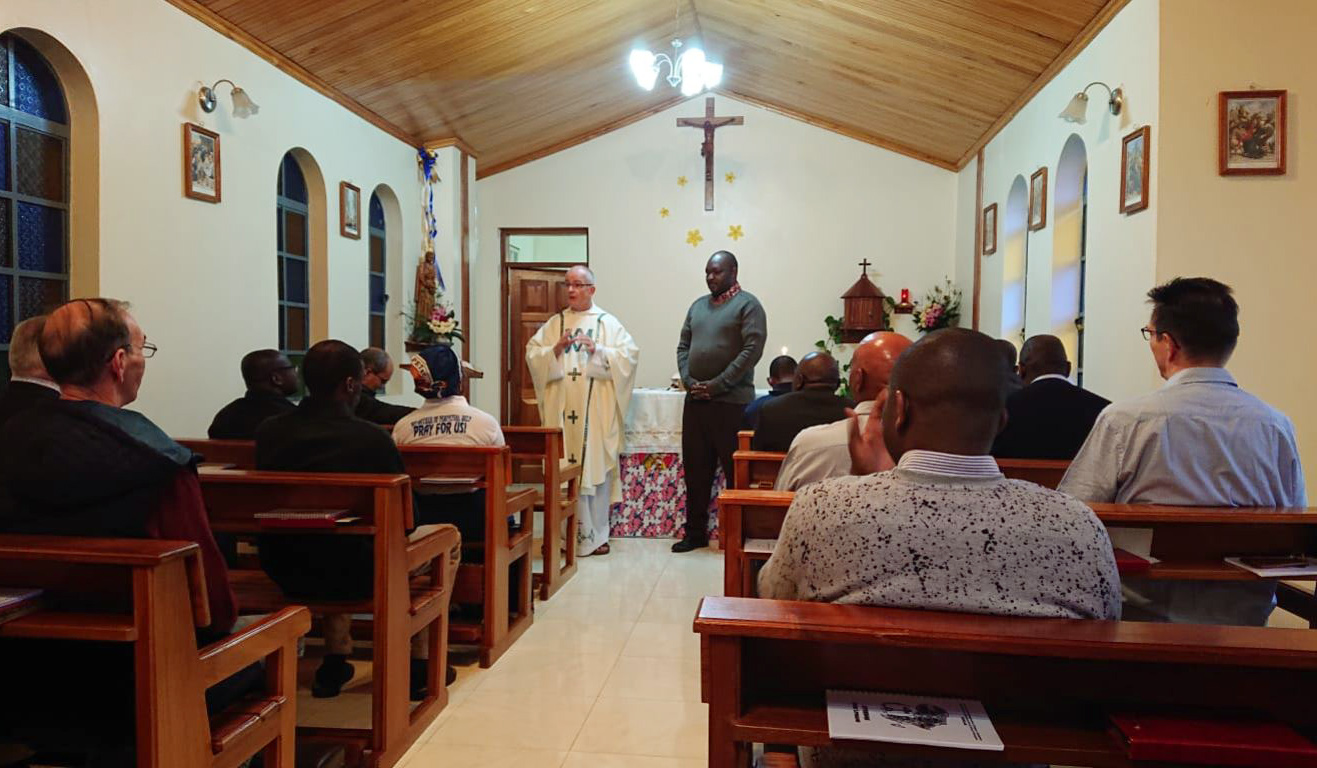 Fr. Michael Brehl the Superior General explained the reason and purpose of the meeting. He took us down the history of the Mid-Sexennial meetings. “The General Chapter of 1991 mandated the General Government to organize meetings in six Regions to help with the implementation of Chapter decisions. For the first time in 1994 meetings were held in 6 Regions. There was an evaluation of the Congregation and its statistics in a scientific manner. In the changing situation of the Congregation, there was a necessity for restructuring. Collaboration and reconfiguration were needed and so too was common formation. Thus we can speak of the reconfiguration process as having begun in 1991.

The second Mid-Sexennial meeting was held in 2000. Its main concern was economic and personnel solidarity. Out of that meeting, several initiatives were born, for example, the Spirituality Centre and Reflections on the Constitutions (Charism 2000). The need for common formation was much emphasized at this meeting. 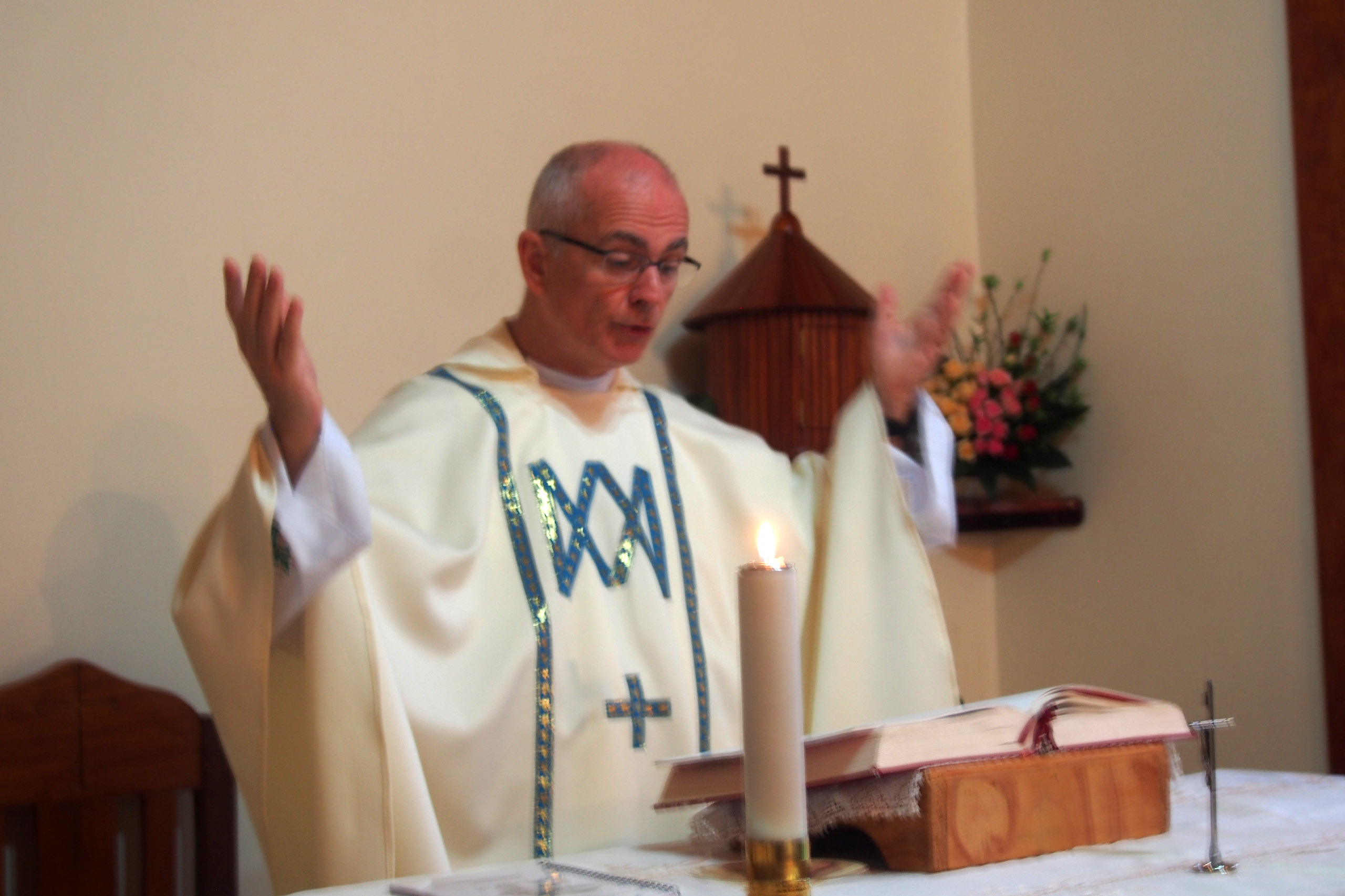 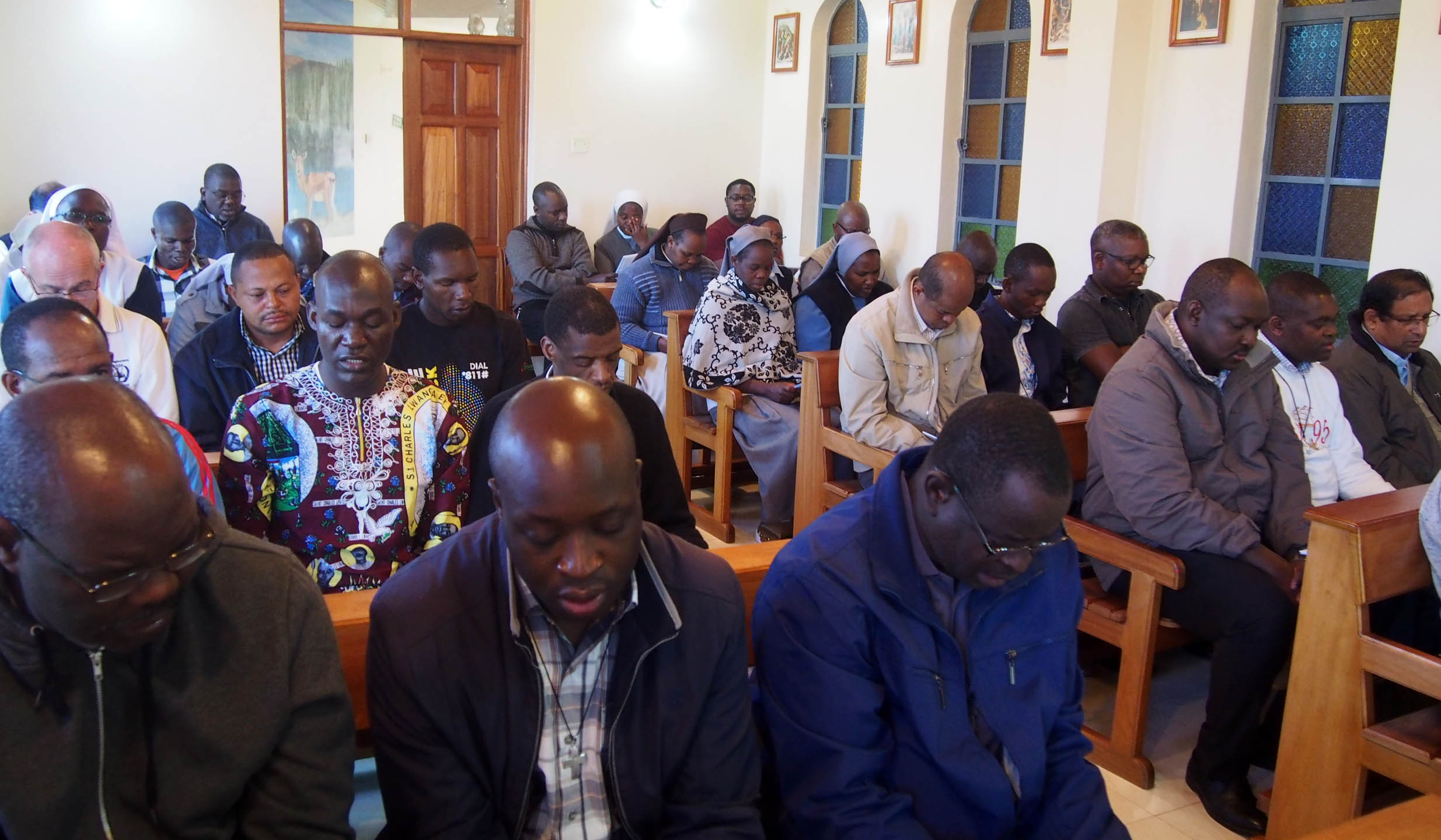 In 2006 the 23rd General Chapter mandated the creation of a Commission for Restructuring. The Commission presented six principles and three models of restructuring. In 2012 there was a Conference meeting to consider the apostolic priorities, common formation and a manual for finances and administration in COREAM. Africa and Madagascar was the first Conference to have it’s manual approved.

Fr. General said we must now look at restructuring in the light of the apostolic plan. This involves the question of the economy, formation, leadership and shared mission. We also need to make concrete strategic plans during this meeting.

The theme of the Sexennium:

“Witnesses of the Redeemer: in solidarity for mission to a wounded world.”

In the light of this theme focus at this meeting is on the Apostolic and Reconfiguration plans. It has been a long process to get them ready. Now that the two documents are ready the challenge is to concretize them.

Certain additions were suggested to the COREAM draft of the Apostolic Plan that was worked out by the Restructuring Commission. With the new suggestions effected in the members endorsed the Apostolic plan.

General Commission for Africa and Madagascar as part of the General Secretariat for Evangelization:

On the third day, we discussed the COREAM restructuring process.  The COREAM Assembly held in Lagos (2017) proposed 5 new provinces for the Anglophone group and 3 new provinces for Francophone group. After the General Visitations and Assemblies, the COREAM Assembly in Nairobi 2018 proposed the creation of three big Provinces and voted the reconfiguration plan as a working document. The proposed Provinces were:

After the 2018 Assembly, the Units of COREAM were asked to reflect on the proposed maps and share their feedback. Two units proposed to create two big Provinces instead of three: 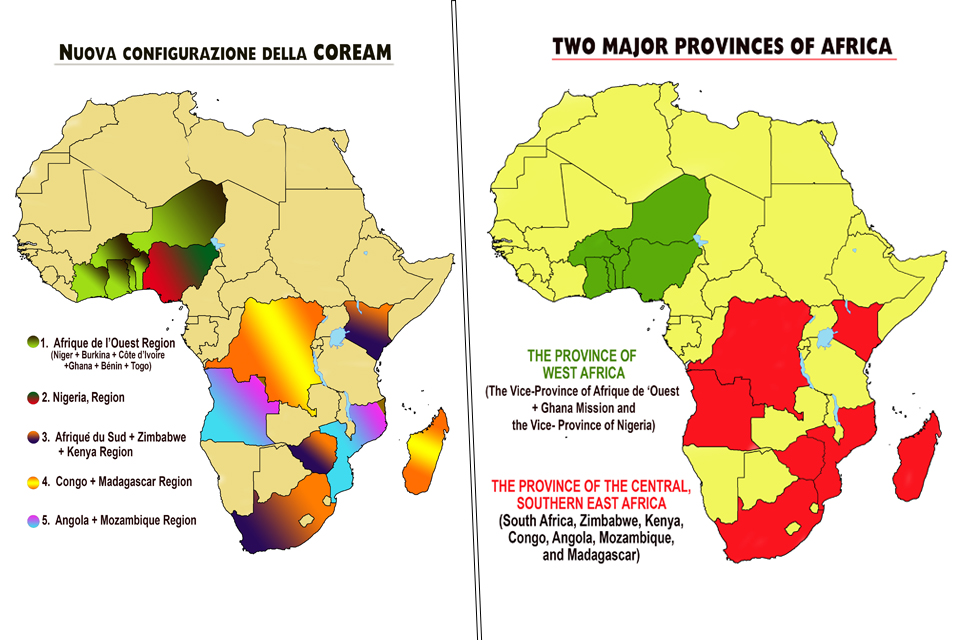 An explanation was given on the three different models in this process of Reconfiguration, namely: Fusion, Union and Federation. The members were asked to deliberate on what form of configuration was practical and on the model they preferred for Africa and Madagascar.

After discussions and common discernment, the 2019 Mid-Sexennial Meeting of COREAM agreed to create two big provinces.

The West African group proposed that this new Province be a Union of the three existing units to form the new Province with two regions:

The Southern Central group of units suggested that the new province be a Union of the seven units to form a new province with three regions:

The model for Configuration will be that of Union. In 2022 each proposed Province will evaluate the steps taken and see if they are ready to inaugurate the new Provinces in 2023. Until the new configuration is firmly established we request the Mother Provinces to support their respective units with finances and personnel. The collaboration among the units within the proposed regions is to be strengthened in common mission projects, exchange of personnel and common formation. Contracts will support this collaboration.

Fr. General appreciated the willingness to embrace the new configuration of Africa and Madagascar: “The step you have taken today is historical and very important.” He assured the delegates that the General Council will take seriously this step during its meeting in December”.

The other subjects discussed at this meeting were:

The Manual for administration and financial affairs, Directories of Superiors and Chapters, Directory for Shared Mission, restructuring of the Academia Alfonsiana, Commission for Brothers, Plan of community life (PCL), Policy on Child safeguarding and protection and preparation of the 26th General Chapter in 2022.

Each Conference will hold a Seminar on “Gospel Stewardship and Financial Management” as soon as possible after the completion of the Manual for Administration and Financial Affairs and the Internal Audit Plan.  Subsequent to the Conference Seminar, the government of each Unit will facilitate (perhaps in conjunction with other Units) a Seminar/Workshop for Community Treasurers and others involved in financial administration.

The Philosophy behind this is the four Missionary Principles, namely:

The Manual offers general administrative objectives, policies, and procedures which are broad enough to encompass most situations while still offering significant guidance in any environment.

Communication strategic plan of the Congregation.

The Directory For Partnership in Mission

Fr. Nicholas presented on the Directory For Partnership in Mission. The purpose of the presentation was three-fold:

The Directory would describe the profile of the Redemptorist laity, in all its diverse expressions and address their duties, rights, responsibility and forms of affiliation.

The work of the General Commission for Brothers

Brother Leon presented a report on the General Commission for Brothers. He shared the challenges and the hopes that are faced by those who embrace the vocation to the brotherhood. It was the decision of the General chapter to come up with a commission for brothers. The commission is to analyze the current situation of brothers and to define the roles of brothers in the congregation. Constitution 55 gives a clear identity of the brothers. The spirit of clericalism has influenced even the faithful in their understanding of religious life. This makes it difficult to promote the vocation to the brotherhood. More attention is given to those who want to become priests. There are few brothers who are members of the formation teams. In general, there is no good program for the formation of brothers. There are changes in the congregation where brothers are now being taken to university for studies. There are some units where brothers are members of councils and now we even have brothers in the general chapter. It is important to recognize the identity of the brothers. Br Leon urged Units to reflect on the promotion of brothers.

After group discussions there was an indicative vote for the document: all the 23 delegates voted to adopt the document as a working document.

Further Clarification on the situation in the Church:

Fr. General clarified that when we talk about sexual abuse of minors, we are talking about any sexual relationship with a minor. The Church universally says a minor is anyone below the age of 18. We need to have a common policy and protocol at the level of the Congregation. We have to be careful, to listen well and not interrogate those who want to raise issues of abuse. Care for the victims of abuse wherever they have been abused is paramount. There is a need to reach out to those who are abused. In the new documents, any abuse by a religious must be reported to the Superior General. Even cases that are investigated and in the end are judged as not true have to be reported. Any Major Superior who does not report to the Superior General deserves to be relieved of his office.

The challenge is that as COREAM we train someone to be responsible for this area. It helps to note that abuse takes many forms. Confreres must be made aware of this.

For the Redaction commission

14th Assembly of the European Conference of Redemptorists

Assembly of the Ordinary Councils of Southern Europe

Annual spiritual retreat, on the road to reconfiguration….