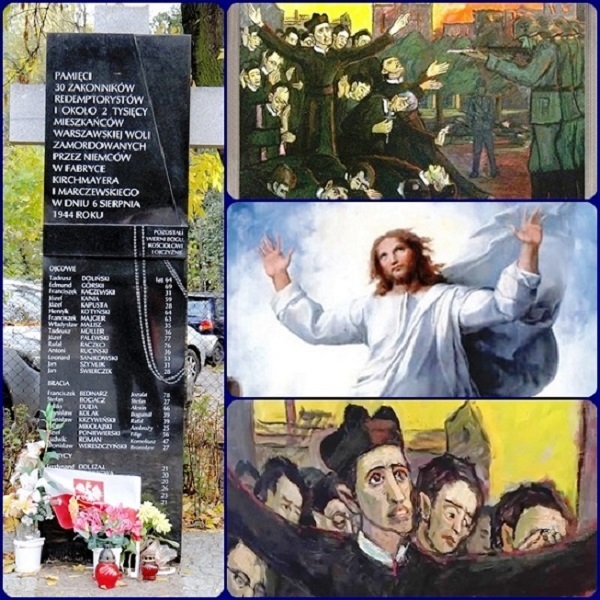 Today, 6 August, we celebrate the Feast of the Transfiguration, which the Eastern Church calls “Easter of Summer”: in it we see the glory of God manifested in his crucified and risen Son, that same glory which will shine in his Resurrection. – It is the Father who presents his own Son: “This is my beloved Son, with whom I am well pleased; listen to him.” This command of the Father has been heard by legions of saints and blessed, especially martyrs, on whose faces the glory of the risen crucifix shines today. Today we too can help Christ to save the world, to fight and overcome evil, certain that through the Cross we too will reach the Glory.

The Feast of Transfiguration is marked also by the anniversary of the death of 30 Redemptorists who were killed by the Nazis for sheltering the resistance Poles in their monastery. Their glory is engraved on marble, but above all in the grateful memory of those who survived and pass it on to posterity.

On August 6, 1944, thirty Redemptorists were murdered as part of the destruction of the capital’s civilian population by Nazi troops after the outbreak of the Warsaw Uprising. All the religious men, who were then staying in the monastery at Karolkowa Street, were killed: 15 Fathers, 9 Coadjutors, 5 Clerics, 1 Novice.

In the first days of the uprising, an insurgent point was established in the monastery in Karolkowa Street. The fathers moved to the basements, providing help and shelter to the local inhabitants. On August 5th, the insurgents’ units were forced to withdraw towards the Old Town.

On the morning of August 6, the Germans surrounded the monastery, and all the people staying there were escorted to St. Wojciech’s Church on Wolska Street, where a transition camp was organized. There the Redemptorists were separated from the group. Then they were led to the area of nearby Kirchmayer and Marczewski factory. There they were killed with shots in the back of their heads.

Then the Germans executed civilians. According to historians’ estimations, in the first week of August, the Nazis murdered about 50 thousand inhabitants of Wola, carrying out the order of the extermination of the whole Warsaw insurgent population. The tragic event that happened 76 years ago was commemorated 9 years ago with a monument, which stood in the place of execution, opposite St. Wojciech’s Church.

The monument is 2.5 meters tall and represents the Redemptorist monastic habit (black granite) blended into a white cross. There is an inscription on the monument: “In memory of 30 Redemptorist monks and about 2 thousand inhabitants of Wola murdered by Germans in Kirchmayer and Marczewski factory on August 6, 1944. They remained faithful to God, the Church, and the Homeland”. The names of the murdered monks follow. The monument was designed by Marek Moderau.

The idea of erecting the monument was initiated by the inhabitants of the parish of St. Clement, witnesses of those tragic events. They remember the help that Redemptorists provided to the local people. The Fathers were confessing till the end, celebrating Holy Mass, giving modest meals, giving shelter to terrified parishioners, and Wola residents in the monastery cellars and rooms under the church. They expected that after the Germans entered the monastery they would die, they had a proposal to escape to Srodmiescie, and yet they persevered to the end.

Video (Polish): Father Paweł Mazanka C.Ss.R. tells the story of events 76 years ago and the tragic death of 30 Redemptorists murdered during the Warsaw Uprising in August 1944.