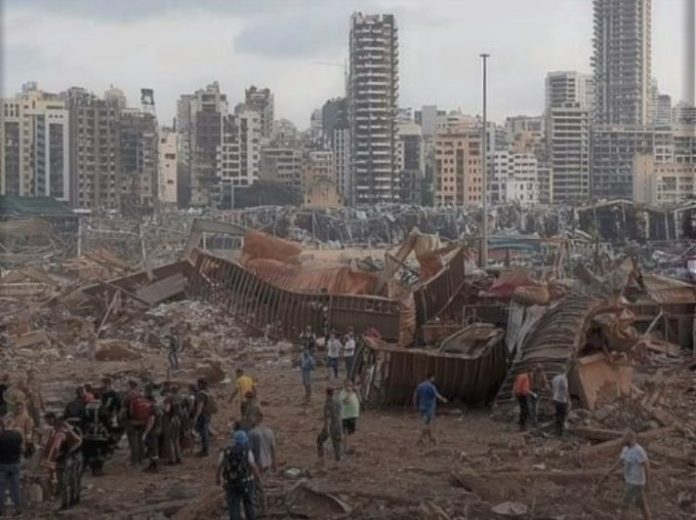 The whole world is shocked by the tragedy of people in Lebanon. A massive explosion in Beirut two days ago killed hundreds of people and caused massive destruction. Rescue action is underway, humanitarian aid and prayer are needed. Below we publish an account of Fr. Binoy Mandapathil C.Ss.R., who works in Beirut and sees the consequences of the catastrophe at close range.

It was in the evening at 6:30 on the 4 August 2020 a double explosion took place in the port of Beirut. With a big tremor, the explosion threatened all of us. We were having chaos after chaos in Lebanon. Due to the revolution which started on 17th October 2019, there is instability in the political social and financial status of Lebanon. Added to that the Covid -19 pandemic paralyzed human life here. Poverty at its extreme because of the loss of a job, insecurity because of the health issues and locked down affected the entire life in Lebanon. Moreover, the double explosion put aside life in Lebanon. There was total confusion at that moment.

When we got back the electricity and internet, we could realize that the explosion was just 5 km away from our community Baouchrieh. The reason for the explosion was a fire in the warehouse where they gathered the arms which spread to the storage of 2750 tons of ammonium nitrate caused the double explosion. The second explosion was severe which cause damages even 30 km away.

As the news report, there are around 200 dead, 4000 injured,  50.0000 people lost their homes, and around 30 km away buildings were affected until today. Our community is adjacent to the school and the church. The doors of the church and schools were damaged.

There are volunteer doctors and paramedics who arrived from different countries to stabilize the situation. Christian convents and churches are opened for the people who lost their belongings.

People are asked to take extreme precautions because of the social spread of coronavirus and the pollution created after the explosion. As the proverb says “hope for the best and be ever ready for the worst”. May St. Charbel and Mother Mary always help us to have a better future.

Read more about the Redemptorist in Lebanon:

The vision of this mission is that the presence of the Christian Churches in the Middle East is both ancient and important. The Popes have consistently insisted upon the importance of this presence, and especially in the last 50 years, religious congregations have been invited to establish a presence that will support, develop and nourish the Christian Churches. The Redemptorists have accepted this challenging invitation. As a missionary Congregation, we strive to be a prayerful and vibrant apostolic witness to the “Copiosa Redemptio” among the people of Lebanon by our ongoing presence in a wounded world.