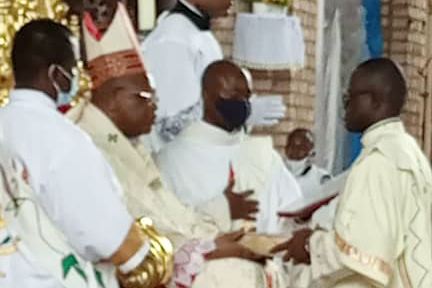 (Congo) With the strict compliance and the measures imposed by the government of the Democratic Republic of Congo to fight Covid 19, the confreres of the Vice-Province of Matadi gathered together on September 19, 2020 in the Cathedral of Notre Dame du Congo to celebrate the diaconal ordination of Brother Trésor Nlemo and the priestly ordination of Father Dieudonné Bakala. It was through the imposition of the hands of the Metropolitan Archbishop of Kinshasa, His Eminence Cardinal Fridolin Ambongo, that our confreres received the sacred order to be at the service of the poor and the most abandoned. These ordinations were organized by the Assembly of Major Superiors (ASUMA) in the city province of Kinshasa as was customary each year. However, from this year after his appointment as Cardinal, Bishop Fridolin Ambongo has decided that all ordinations in his jurisdiction must take place in the Cathedral Church. As a reminder, in previous years all religious held their ordinations either in a church chosen by the major superiors or in one of the places chosen by a congregation.

In the group of those ordained were our two Redemptorist confreres. Altogether there were 13 deacons and 12 priests from the following congregations: the Redemptorists, the Religious of Saint Vincent de Paul, the Crucifiers, the Passionists, the Missionaries of the Sacred Heart, the Religious of the Sacred Heart of Jesus and Mary (Picpus), the Parish Cooperators, the Capuchins, the Missionaries of Africa, the Jesuits, the Josephites, the Missionaries of the Immaculate Heart, the Discalced Carmelites, the Servants of the Poor and the Paulinians. The ordination took place in a very festive atmosphere. After the celebration of the Holy Eucharist, a reception was organized for our guests, family members and acquaintances of our two confreres at the community of the St. Clement Mary Hofbauer Center in Kintambo. The sharing of the fraternal meal was embellished by the orchestra “la Rédemption”, a musical group founded and animated by the Very Reverend Father Vice Provincial, Jean Robert Diyabanza. We also noted the remarkable presence of the Lay Redemptorist Fraternity (FLARED in French), composed mostly of former Redemptorist students. 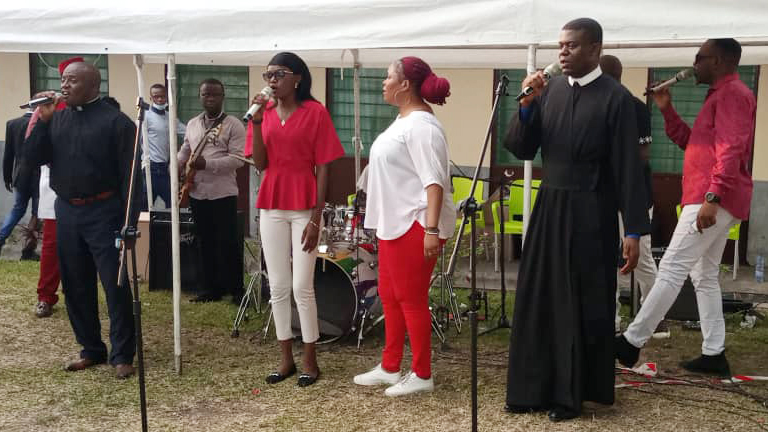 Our confrere Father Dieudonné Bakala, after various celebrations of Masses in his family and in his province of origin (Diocese of Kole), will return to his community where he was appointed and had to exercise his diaconal ministry, the parish of Saint Camille de Selembao in the capital city, Kinshasa. While our confrere, Deacon Treasure Nlemo after a stay at St. Gerard’s house in Kola will go to his new community, the parish of Our Lady of Fatima in Luozi. We wish our confreres a fruitful ministry. May the work begun by St. Alphonsus always find men capable of continuing work of Christ the Redeemer among the most abandoned.