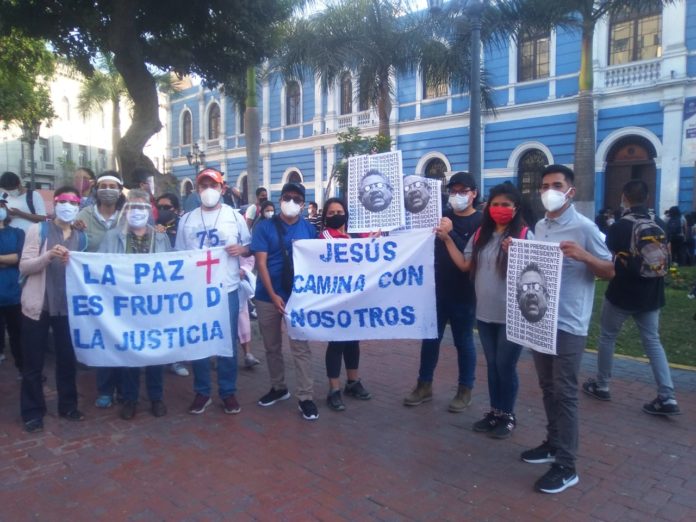 Peru is experiencing a strong political crisis after the Peruvian Congress dismissed President Martin Vizcarra on November 9. The entire population has demonstrated against Congress with marches in the streets of many cities in the Andean country where 3 presidents have passed in less than four years, and the pandemic has registered 925,000 cases with 35,000 victims.

Scala News has received a letter from Father Grimaldo Garay Zapata C.Ss.R. which we are publishing in full.

PERU: “They messed with the wrong generation.”

“Merino is not our president”, “This congress does not represent me”, “This president does not represent me”, are some slogans that invaded the social networks since Monday, November 9, when the Congress of the Republic, in a disproportionate, irresponsible and bordering on a criminal act, declared the vacancy of the Constitutional President Martin Vizcarra, for “moral incapacity” in the political trial opened against him, which takes place 5 months before the presidential elections. The next day Mr Manuel Merino de Lama, President of Congress, assumes the presidency of the country and elects his Council of Ministers.

Faced with this political panorama (usurpation of powers and clear partisan interests and political personalities), the youth, the citizens and many civil collectives without a political tint took to the streets to protest, the young people identified themselves with this slogan: “They messed with the wrong generation”, until today, November 15, we have already had 6 days of massive protests (never before seen, despite the pandemic) in the capital and all the cities of the country. The people do not give legitimacy to the new president and his council of ministers. One can feel the indignation, the disappointment of the young people and the citizens for this kind of politicians. The police, especially in Lima, have repressed with excessive violence the demonstrations and civil mobilizations (gases, pellets and marbles (crystal balls)); today, unfortunately, we have many wounded (youth and police), about 15 demonstrators have disappeared, and 2 young people have died from police repression. “Not one more dead! Merino out” is the cry of the whole country.

The Conference (Conference of Religious of Peru), Cardinal Barreto and the Archbishop of Lima were the first to manifest their concern about the political situation (they asked to reconsider the presidential vacancy). They call to defend “the State of Law, the Independence of Powers, Justice, Legality, Liberty, Governability and Democratic Institutionality”, values without which the construction of society is weakened or destroyed, later the Episcopal Conference in a communiqué joins this request. Some extracts from the communiqué of the Bishops: “It is also urgent to continue and promote the fight against all the faces of corruption that has revealed social cancer that must definitely be cured; therefore, we must not stop. The commitment and responsibility of the authorities must reaffirm this struggle to achieve a more transparent and just Peru; because “to make possible the development of a community,… the best policy at the service of the common good is needed”. (Fratelli Tutti, 154).

As Church, since always and even more during this pandemic, we want to be close to those who suffer most and to the most vulnerable, because we are convinced that the dignity of the human person, of the family and the common good are the pillars of any society that looks at its future with responsibility and hope”.

At noon, President Mr Manuel Merino de Lama, and his Council of Ministers have resigned their positions. The people did not give them legitimacy, because in full light and driven by groups and politicians (corrupt), they usurped the legislative power. All-day Sunday the Congressmen have been meeting to find a reasonable solution to the crisis that is acceptable to the majority of Peruvians. One hour from the end of the day, the congressmen still have not reached a consensus. Let’s hope that in the next few hours there will be a new president and he will have the support of everyone. We tell the politicians that it is time to listen to the population and act with Peru in mind. We honestly do not know how this whole political crisis that is dragging down an entire country will end.

There are still demonstrations and citizen mobilizations in all the cities of the country, there are tributes and vigils in memory of the two young people who died. Our Bishops call us to defend democratic institutions, to seek peace and an invocation to pray for our country.

As Redemptorists, we continue to be united with the people who demonstrate against the abuse of power and the corruption of the political class. Today more than ever we must be: “Witnesses of the Redeemer, in solidarity for the mission, in a wounded world”.