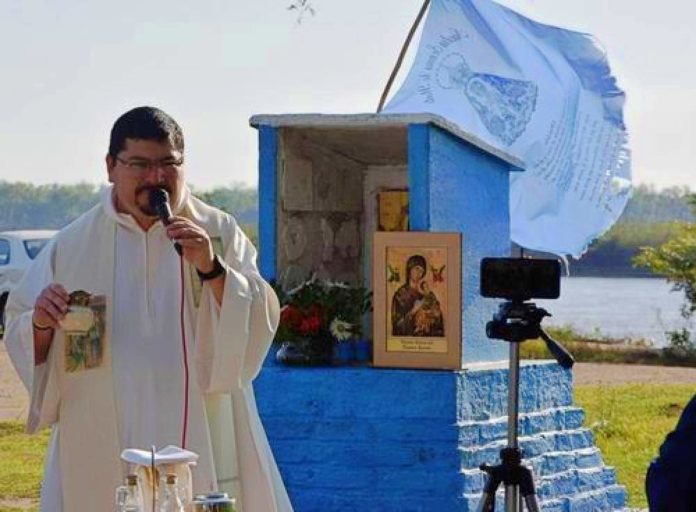 (Goya, Argentina) – A Mass of Thanksgiving was held in the outer harbour of Goya, commemorating the 288th anniversary of the founding of the Congregation of the Most Holy Redeemer, which was St. Alphonsus’ response to Jesus’ call to the poor in 1732, in Scala, south of Naples, Italy.

In the second city of the province, the Redemptorist mission has been present for a century. Father Boris Javier Escobar Sejas, pastor of La Rotonda with Father Carlos Cordoba, celebrated the Eucharist which was broadcast live on social networks, following the health protocol required by the coronavirus pandemic.

Reflecting on the Gospel of the day, Boris Sejas stated that “Jesus teaches that his house is a house of prayer and not a place of commerce”, and where Jesus demonstrates “that the true temple is each man and, we must not stain each temple, which is the life of each human being”.

He emphasized Jesus’ words: “Teach not evil but good, do not twist the ways of God, do not disfigure the word of God, do not deform the holy things, and somehow he tells us not to deceive man.

He added that St. Alphonsus, 288 years ago -when he was in Scala, where there were people who did not have much chance of going to the temples and churches-, understood that the Gospel had to be translated for all those people. That the Word of God had to be communicated, announced and made understood to all the people there and in the mountains, in the fields and in the most remote places, where people could be mostly forgotten and abandoned”.

“St. Alphonsus wanted to put up a sign; that sign was the Redemptorist family: men and women who wanted to take the Divine Word of Jesus to the farthest corners,” he remarked.
Finally, he asked the parishioners: “To give thanks for the life of this great Redemptorist family, the missionary life towards the most simple”.

St. Alphonsus in Scala had understood that the poor were alone; they had no one to help them; they were totally abandoned.

Redemptorist missionaries continue the charism of Alphonsus in the Church and society.
On November 9, 1732, in Scala, Italy, St. Alphonsus de Liguori founded the Congregation of the Most Holy Redeemer to follow the example of Our Savior Jesus Christ, announcing the Good News to the poor. He was then 36 years old. His life became a continuous mission and a service to the most abandoned.