Kaspar Stanggassinger, born in Berchtesgaden (Germany) on 12 January 1871, was the second of 16 children. Having completed his studies in his native village and the seminary at Freising, after reading the works of St Alphonsus and getting to know the Redemptorists, he entered the Congregation of the Most Holy Redeemer on 6th October 1892. Professed in 1893, he was ordained a priest on 16th June 1895. He wanted to go to Brazil as a missionary, but his superiors assigned him to do the formation task of young candidates for the priesthood. His life was short and ordinary, but one of extraordinary commitment and self-giving to God and his brothers and sisters. He died on 26th September 1899 in Gars am Inn. John Paul II beatified him on 24 April 1988.

The Church places before us the example of the life of Kaspar Stanggassinger, a modest but no less heroic follower of Christ. His family gave his life a fundamental religious imprint. He was called to the priesthood at a very early age and was thus entirely projected towards God. He became a Redemptorist Father, not to isolate himself from men but to lead men to God in closer union with Christ. During his priestly ordination, he said: “By the grace of God I want to become all things to all people”. 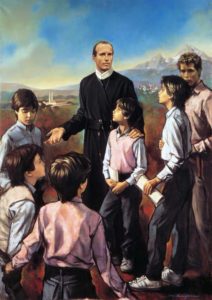 Holy Father Kaspar realised this intention by faithfully fulfilling his daily duties. He did not seek the extraordinary, but did “what the day demanded”. As preceptor and teacher of young men preparing for the priesthood, he was always present. “I want to listen to everyone willingly as if I had nothing to do”.

Father Stanggassinger was for his young Christians the ‘good shepherd’ after the example of Christ, who knows his flock and leads it with care. When educating, he was concerned to develop man’s spiritual and moral strength harmoniously, always with a religious appeal. He was deeply convinced of this: ‘Only the man who prays can know himself’. Therefore, it was very important to him that his pupils should have faith in God and Jesus Christ as the central truth of their lives. As a “good shepherd”, Blessed Kaspar Stanggassinger was an example for his young friends on the Christian path to holiness. He lived personally what he taught and demanded of them. He firmly placed God at the centre of his life and work. He wanted to belong to him completely and do his will in everything, even in small and modest things. With his sense of daily duty, Father Kaspar shows us the path we must all follow: the path of holiness in the imitation of Christ in daily life. His great love for young people should be a model and stimulus for priests, parents and educators. Blessed Father Kaspar, pray for the young people of our time and lead them to Christ!