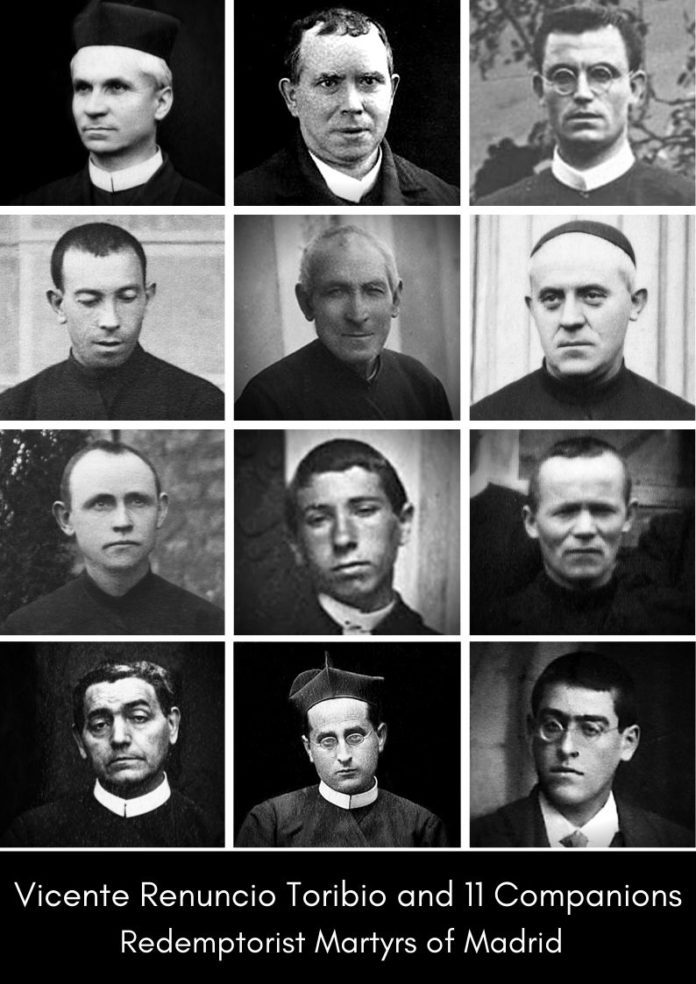 Pope Francis, after considering the positive conclusions of the analysis conducted by the historians, theologians, cardinals and bishops, consultors of the Congregation for the Causes of Saints, on the life, virtues and martyrdom of the servants of God Vicente Renuncio Toribio and 11 companions of the Congregation of the Most Holy Redeemer, has approved the promulgation of the Decree on their martyrdom.

The 12 missionaries, six priests and six coadjutor brothers, members of the two Redemptorist communities of Perpetual Help and Saint Michael the Archangel in Madrid, were all assassinated between July 20 and November 7, 1936, at the beginning of the bloody religious persecution that took place in Spain until 1939.

Fr. Vicente Renuncio Toribio was born in Villayuda (Burgos) on 11th September 1876. He entered the Congregation and made his vows on 8th September 1895. Ordained a priest on 23rd March 1901, he devoted himself to missionary work, formation and teaching in the minor seminary. From 1912 to 1923, in the Commune of Perpetual Help in Madrid, he was Provincial Consultor and editor of the magazine of the Shrine. After a brief absence, he returned to Madrid as Prefect of the Shrine until July 1936, when, with the beginning of the persecution, he took refuge in the homes of family friends. Arrested on 17th September, he remained in prison until 7th November when he was killed. On leaving his cell, he was heard to exclaim: “I offer my life for my confreres in Spain, for the whole Congregation and unfortunate Spain”.

Fr. Crescencio Severo Ortiz Blanco, was born in Pamplona on 10th March 1881. He professed his vows on 24th September 1900 and was ordained on 28th December 1905. Active in popular missions and teaching philosophy, he lived in the communities of Astorga, Cuenca, Valencia and Barcelona. Transferred to Madrid on 13th July 1936, in the community of St Michael the Archangel, on 20th July he was captured and killed by militiamen together with his brothers Ángel Martínez Miquélez and Bernardo (Gabriel) Sáiz Gutiérrez.

Fr. Ángel Martínez Miquélez, was born in Funes (Navarre) on 2nd March 1907. Admitted to the Redemptorist order, he made his profession on 24th August 1925. Ordained a priest on 20th September 1930, he devoted himself to teaching and the missionary apostolate, living in various communities. On 10th July 1936, he was transferred from the Perpetual Help community to St Michael the Archangel. On 20th July, with the beginning of the persecution, he left the house with Fr Crescencio Ortiz and Br Bernardo Sáiz (Gabriel) searching for safe refuge. On the way, they were caught and killed by militiamen.

Br Bernardo (Gabriel) Sáiz Gutiérrez, was born in Melgosa (Burgos) on 23rd July 1896. He took the Redemptorist habit on 12 November 1919 and professed the following year on 13 November. After having been in the community of Pamplona, in 1925, he was transferred to the community of Saint Michael the Archangel in Madrid. He was an exemplary religious for his constant availability and life of prayer and was always dedicated to the service of the kitchens. Together with Fathers Crescencio Ortiz and Ángel Martínez, he was martyred on 20th July 1936.

Brother Nicesio Pérez del Palomar Quincoces, was born in Tuesta (Álava) on 2nd April 1859. He entered the Congregation and made his profession on 30th March 1891. He was a resolute and tenacious character, backed up by a solid faith and nourished spirituality. He worked as a carpenter, horticulturist, beekeeper, mason, and carpentry manager in the different communities in which he lived. He moved to Madrid in 1934 to the Perpetual Help community. With the beginning of the persecution, at the age of seventy-seven and almost blind, he and Br Gregorio Zugasti Fernández de Esquide sought hospitality with friendly families. Captured in the afternoon of 14th August 1936, he was killed two days later.

Gregorio Zugasti Fernández de Esquide, was born in Murillo de Yerri (Navarre) on 12th March 1884. He professed his vows on 25th December 1912 and lived in Madrid in the Perpetual Help community, working in the publishing house. Considered a pious religious, a reliable and obedient worker, he witnessed his evangelical charity not abandoning his elderly confrere Nicesio Pérez during the persecution, sharing his martyrdom on 16th August 1936.

Brother Aniceto Lizasoain Lizaso, was born on 17th April 1877 in Irañeta (Navarre). He became a professed Redemptorist on 15th October 1896 and lived in various communities, carrying out, in addition to various domestic tasks, the offices of sacristan, porter and bursar. Although he wanted to become a priest, he preferred to remain a coadjutor brother not to leave the Congregation. With the beginning of the persecution, he left the Perpetual Help house in Madrid to find hospitality with friends. Finally, he was taken into a boarding house and, following a complaint, on 18th August 1936, he was captured and killed.

Fr. José María Urruchi Ortiz was born in Miranda de Ebro (Burgos) on 17th February 1909. After his religious profession on 24th August 1926, he continued his studies with tenacity and considerable effort in Astorga. Ordained a priest on 20th October 1932, he was transferred to Nava del Rey and in 1934-1935 to Coruña, Cuenca and Vigo. In October 1935, he was transferred to Madrid to the Perpetual Help community, where he remained until 20th July 1936, when, due to the persecution, he left the house to be hosted by a friendly family. Following a search, on 22nd August 1936, he was captured together with his brother José Joaquín Erviti Insausti and killed during the night, at only 27 years of age.

Brother José Joaquín (Pascual) Erviti Insausti, was born in Imotz (Navarre) on 15th November 1902. He made his profession on 24th February 1930 and was sent to the community of Astorga. Transferred to Madrid on 24th February 1935 to the Perpetual Help community, he remained there until July 1936, working as an assistant cook. Forced to flee, he took refuge with Fr José María Urruchi Ortiz in a friendly family. Considered a prudent, pious and trustworthy religious, he spent his last period in constant prayer. Captured and killed by militiamen with Fr José María Urruchi Ortiz, his body was found on 22nd August 1936 on the road to Andalusia.

Fr. Antonio Girón González, was born in Ponferrada (León) on 11th December 1871. After his profession on 15th August 1889, he received the priesthood on 19th May 1894. He lived in various communities, involved in teaching, formation and as a provincial councillor. An exemplary religious, with remarkable intellectual gifts and deep interior life, he bore witness to the end to his devotion to the Virgin Mary by constantly reciting the rosary. At the beginning of the persecution, he had been a member of the Perpetual Help community since June. After taking refuge first in a private house, then in a convent and finally in a hospice, he was discovered and captured by the militia who killed him on 30th August 1936.

Fr. Donato Jiménez Viviano was born in Alaejos (Valladolid) on 21st March 1873. He professed his vows on 8th September 1893 and was ordained a priest 27th May 1899. In the different communities where he lived, he almost always played the role of superior, without neglecting missionary activity and the promotion of vocations to religious life. He had been resident in Madrid, in the community of St Michael the Archangel, since 23rd June 1936, but with the persecution, he found hospitality with friendly families. Captured on 13th September, he was imprisoned and killed, probably on the night of 17th September 1936.

Brother Rafael (Máximo) Perea Pinedo, was born in Villalba de Losa (Burgos) on 24th October 1903. After his religious profession on 27th February 1926, he lived in the communities of Astorga, Santander and, lastly, in Madrid from 28th June 1933. He was good-natured and joyful, with a generous spirit of service, working as a porter, sacristan, bursar and cook. He left the religious house on 20 July 1936 and found refuge first with families and friends and then in a boarding house, where he was captured and killed on 2 November.