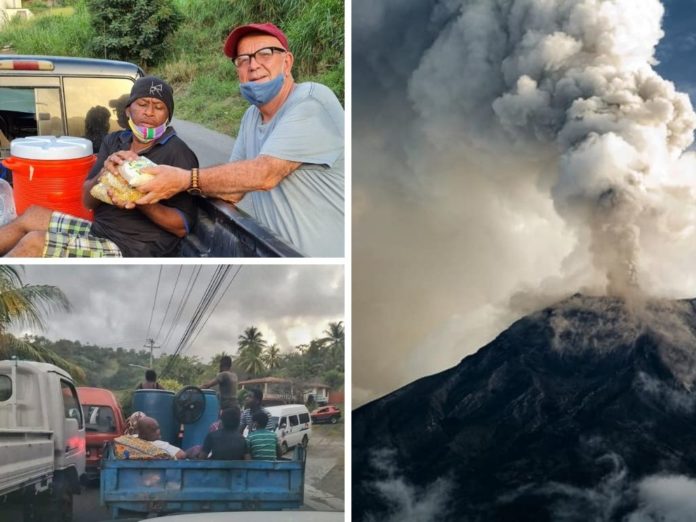 The Redemptorists Missionaries, Father Kevin Murray and Brother Gerard St. Hilaire minister to the 16 000 people who live in the red zone in the region of Sandy Bay and Georgetown, on the northeastern side of the Caribbean Island of Saint Vincent where on Friday, April 9, began the eruption of La Soufriere volcano.

Please, read the reflection from Fr. Kevin Murray as he recalls the recent months and weeks, that they were living in a crisis situation caused by the danger of volcanic eruption. As it is said on the website of the Baltimore Province, both Redemptorists are safe and have received shelter with Bishop Gerard County of the Diocese of Kingstown in the southwestern corner of the island.  Please, remember in prayer all involved in this emerging crisis, and also our confreres Fr. Kevin and Br. Gerard who have remained on the island to minister to those in need.

On the webpage: www.Redemptorists.net and Facebook https://www.facebook.com/RedemptoristsBaltimore, the Province of Baltimore will continue to post news as well as pictures of life on the island of St. Vincent.

A Shot Heard Round the World – Reflections from Fr. Murray on St. Vincent

Shortly after Christmas 2020, the government of Saint Vincent and the Grenadines issued an alert. “Increased seismic activity,” it read, “has been detected at the volcano located in La Soufriere.” Overnight, the celebrations of the source of our faith quickly yielded to focus on a summit far from Bethlehem.

Anticipations for Old Year’s Night and New Year’s cheer were dimmed by the news. Complicating matters, Covid-19 cases were beginning to spike in the country. No mass gatherings would be allowed for the coming days, perhaps weeks. Fortnights turned into months of precaution regarding both the virus and volcano.

During that time, high alerts were issued for those living in the upper Leeward and Windward sides of the country: “prepare for a possible explosive eruption.” Bags were thus packed and ready to go in the event of an evacuation order. A second advent began. Although no date could be set for the coming, expectations of explosive eruptions grew with the size of the newly formed volcanic dome at La Soufriere.

The unexpected Advent served as a preface to Ash Wednesday and the Lenten season. The next forty days would follow the familiar call to prayer, fasting and almsgiving in anticipation of Easter joy. At the same time, an unfamiliar pulse beat in the background. One that quietly questioned what might prevail in the meantime. Tragedy loomed while anticipating the Triumph of Easter.

Locals were quick to remember Good Friday of 1979 as the last explosive eruption of the volcano. Would the holy day this year result in the same occurrence? More than one person was of the mind that it would happen similarly. Anticipation grew and expectations became more intense. Tremors were felt beginning on March 25 – an eerie annunciation of news not so good while remembering better news and the words of the angel to Mary: Be Not Afraid.

Perhaps the sequence of events leading up to Easter were meant as a reminder of the profound ways in which our God is always victorious… that death cannot contain him… that the cross conquers sin… and with eyes of faith fixed on Jesus, all things are possible. The empty tomb reminds us that whatever the circumstance, however difficult it might be, the living God is always in our midst.

As the Octave of Easter was celebrated, the message of resurrection served as a good anchor for what would emerge. The evacuation order was given for persons in the area of La Soufriere on Thursday evening of that week near 5 p.m. Persons with meager belongings lined the roads waiting for rides away from the red zone, as it is called, to safer ground. They scrambled to makeshift shelters, family members and friends. Close to 20,000 residents shifted from their comfort zone to refugee conditions overnight, including members of the Redemptorist community.

The next morning – some might say seven days late – a Friday again saw the volcano move from an effusive to an explosive state. Three explosions rocked the island-nation that day. The first shortly before 9 a.m., the next one around 3 p.m., and the third in the evening after 6 p.m. From a safe distance, persons watched as plumes of ash-spewing smoke filled the air for miles. Photos lit up social media. Messages from family and friends gratefully came streaming in, as they had the night before. An abundance of prayer and blessing has been offered. Solidarity with others has formed a bond of encouragement, reminding persons they are not alone. All as more activity is expected.

Heavy ash covers everything now. In some areas it is said to be ankle-deep. Roofs have collapsed under the weight of it all. Some damage has been noted to church property, although it is too early to assess firsthand. There is a disfiguration of sorts to the landscape. The sea, once blue, has a dark tint and weekend skies have been hazy.

Yet through these same skies, Jesus rose from the dead. With eyes of faith there is always triumph over tragedy. Brighter clouds will prevail, from which will come a message of new life and hope. Jesus will once again come through locked doors of despair and open hearts with peace as he did with the apostles in the Upper Room.

There is a call to renewed faith, hope and charity these days. The wonderful event celebrated when the volcanic alert first sounded, broke into a world very much in need of the presence of God. The announcement of Christ’s birth came first to the shepherds – those on the fringes and margins. The same place many Vincentians now find themselves.

The shepherds saw and believed. The ancient hymn of the angels that they heard is still sung, as it was on the morning of the explosive eruption: Glory to God in the Highest! And, peace to all people of good will. The ones who experienced it went and told everyone.

At the empty tomb, those who saw told the others. The Spirit of God transformed them and emboldened them to spread the word, the good news of Jesus risen from the dead – wherever they went and without fear.  From that small space, the message of God’s redeeming love went out to all the world.

As events unfold here in a relatively small space, a shot has been heard around the world. As the story is told, there is a reminder not to forget the glory of God who always gives life and breath. Throughout the seasons of the Church year – from Advent to Christmas to Lent to Easter and beyond – the message is clear: our Redeemer lives, and, through his abundant love and bountiful mercy, we shall rise again! 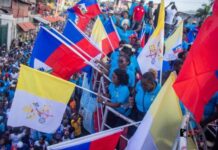 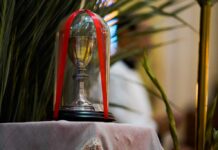