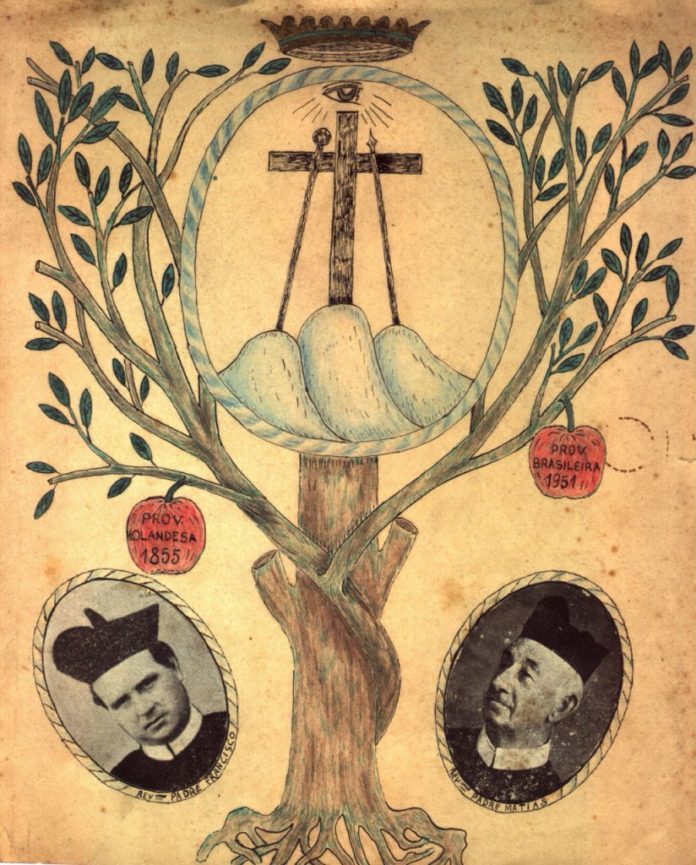 The “adventure” in Brazil begins

On July 2, 1893, the first two Redemptorist missionaries, Fathers Mathias Tulkens and Francisco Lohmeyer, arrived in Brazil from the Dutch province to investigate the feasibility of a Redemptorist foundation in the lands of Tupiniquin.

On 26 April 1894, with the arrival of other Redemptorist missionaries (priests and brothers), the Dutch-Brazilian Mission was canonically established in the House of the Assumption of the Blessed Virgin in Juiz de Fora, MG, in the community now known as Paróquia da Glória. Nine years later, during which the unceasing efforts of the Dutch Redemptorist missionaries to settle in Brazil were greatly appreciated, the Vice-Province of Rio de Janeiro was established on February 10, 1903, thus creating a provincial unit linked to the Province of Amsterdam.

The Province of Rio is born

When the time was right, the Province of Amsterdam, the “Mother Province”, living under the impact of the Second World War, understood that it was time to emancipate its daughter. Thus, on 29 June 1951, the canonical birth of the Province of Rio de Janeiro, which until then had been administered by its “Mother Province”, began to have an autonomous administration, the first Provincial Superior being the Rev. Veeger, C.Ss.R.

Since then, difficulties and challenges have been constant and numerous but never so great as to dampen the missionary spirit and ardour brought from the Dutch plains by the sons of St. Alphonsus.

Any human organisation destined to survive throughout history must be in a permanent process of self-criticism and reinvention. And this has been a constant in the 70 years of the journey of the Redemptorist Province of Rio de Janeiro. In this perspective, we commemorate this jubilee year 2021-2022, which will mark the beginning of the process of reconfiguration with the Province of São Paulo and the Vice-Province of Bahia in the search for creative solutions in their missionary vocation.

New paths and new perspectives are emerging, and we need to arm ourselves with the ardent missionary spirit and hope of those who have gone before us. There are no easy ways to proclaim the Gospel; we must always be bold! May the Most Holy Redeemer help us, and may Mary come to our aid forever!

In the 70 years since the canonical erection of the Redemptorist Province of Rio, the world has changed, new forms of evangelisation have emerged, but fidelity to the charism and mission of proclaiming the Plentiful Redemption has remained firm. In an interview with Jornal Novo Tempo (Paróquia da Glória / Juiz de Fora, MG. June / 2021), the Provincial Superior of the Redemptorist Missionaries of the States of Minas Gerais, Rio and Espírito Santo, Fr. Nelson Antonio Linhares, C. Ss .R., speaks to us about the joy of celebrating this jubilee and the challenges that the future holds.

The celebration of the 70th anniversary comes at a time of restructuring of the Redemptorist Congregation. We want to consolidate and give life to the current trajectory of our Province. The path of trust: there is a future for our hope! We want to pave the way for the reconfiguration of tomorrow with Sao Paulo and Bahia in the certainty of a well-traced history.

Therefore, the experience of faith in Christ the Redeemer tells us that this process of restructuring is a call from God to open frontiers, to face the challenges of growth in mission. The prophet Isaiah warns us: “Enlarge the space of your tent, spread the canvas of your dwelling without stint; stretch out your cords, make ready your stakes … Fear not, for you will no longer be ashamed”. (Es 54, 2,4)

What will the celebrations of these 70 years be like?

We declare a “year of seventy”: from June 2021 to June 2022! The inauguration will occur on 29 June, the day of the canonical erection of the Province of Rio de Janeiro (1951), with a solemn Mass in the Sanctuary of São José, in Belo Horizonte. This Mass will be broadcast by TV Aparecida and TV Horizonte and can be accompanied by all the faithful who are part of the great “Redemptorist Family”.

Throughout the year, we will have a varied, deep and exciting programme: exhibition, book launch, commemorative assembly, gifts, our own seal, launch of the official logo, festive celebrations and much more. Follow this programme through our website: www.provinciadorio.org.br and through social media: @provinciadorio

This is how the province of Rio was built! Come then! Even in the midst of this pandemic that scares and destroys lives, let’s do what will be! Hope will win!