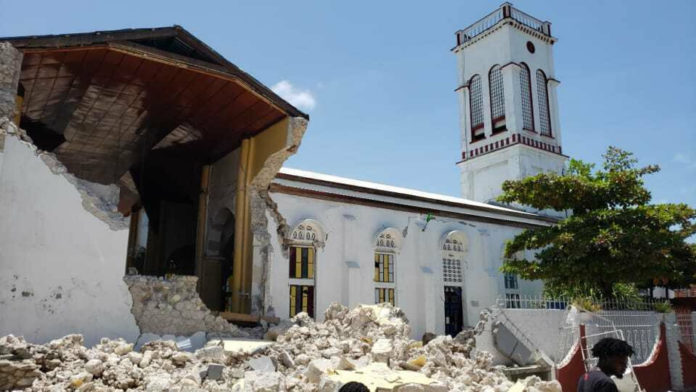 The government of Haiti has declared a state of emergency following an earthquake measuring 7.2 on the Richter scale that struck the country on Saturday, 14 August. According to a partial report released by the Civil Defence, the number of people killed by the earthquake has risen to 304, including 160 in the south, with hundreds of people injured and missing.

Today, Sunday 15, after the recitation of the Angelus, Pope Francis referred with great concern and suffering to the people of Haiti hit – 11 years after a devastating earthquake in 2010 – by a new seismic wave that is even stronger. For now, a great deal of damage to the religious heritage has been recorded. Among the injured is Cardinal Chibly Langlois, archbishop of Les Cayes. Obviously, there is a great deal of material damage everywhere, as if to sow more poverty among people and families who have already been poor for centuries.

“This August 14, on the eve of the Solemnity of Our Lady of the Assumption, a very popular feast in some departments of Haiti, an unexpected event arrived: the earthquake. According to official information, at least 304 people died as a result of this 7.2 magnitude earthquake. There are many injured, including Cardinal Chibly Langlois, and hundreds are missing. The dramatic situation has also been confirmed by the country’s prime minister, Dr Ariel Henry. [An update of August 18: Reports so far speak of around 1,900 dead and about 10,000 injured, with an unknown number of missing persons.]

On an ecclesiastical level, the damage is immense. Two cathedrals are seriously affected, many temples and parish houses are destroyed. On the part of the Redemptorist Missionaries, there is no loss of life, but some of our houses in the South are affected by major cracks. The relatives of the confreres are badly affected. We hope to have more information in the next few hours.

As a Congregation, we present our condolences to the families of the victims of this strong earthquake that has caused several losses in human and material life in the southern part of the country.
May the Lord have mercy on the country. The country is becoming a place of unprecedented events. The people want peace and well-being to look to the future with eyes full of hope!

In Jeremie, the novices were not there at the time of the earthquake, but unfortunately, there is a lot of material damage.

In Les Anglais, the pantry for charity and food distribution of the Redemptorist NGOs was badly damaged.

In Chateau, the Redemptorist school withstood the strong tremor of the earthquake, but the community house is half destroyed.