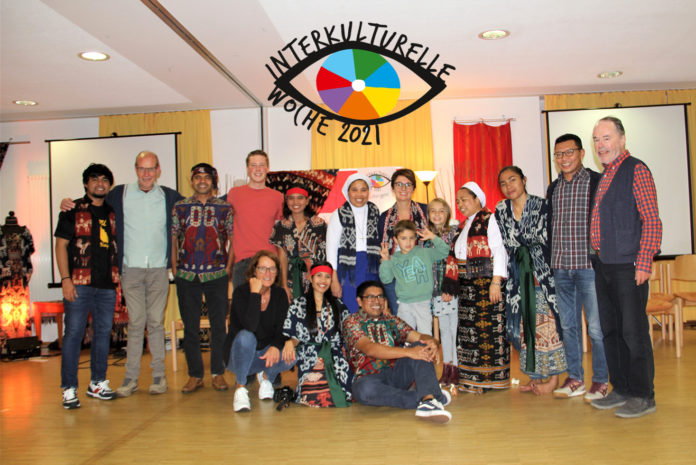 (Kirchhellen, Germany) The youth monastery Kirchhellen organized a cultural evening under the heading “Rumah Budaya – Sumba – Indonesia” as part of the intercultural week on 24th September 2021. As soon as they entered, visitors noticed the special atmosphere that was in the air. Our three Indonesian volunteers Novi, Paula and Susan welcomed the visitors vested in their typical dresses.

Father Fransis da Cunha and Father Gabriel Notan Keraf also shone in traditional clothing. From our monastery in Bonn, the three Indonesian Fathers Ian, Eman and Ino and two Indonesian missionary sisters from near Trier enriched this evening and also helped to shape it. Everything was set in Indonesian hands? The German community members organized everything so well.

The youth centre itself was richly decorated with modern lighting technology, skilfully staged Sumba stylers, photos of the island of Sumba and its inhabitants were put up, flower arrangements were done so attractively and a model of a Sumba house was set up – which was picked up especially from the Bonn monastery on Friday morning. All these settings made the participants feel like they were in another world in the middle of Kirchhellen.

A deafening cry of jubilation accompanied by drums: live, not by video or similar. Father Fransis da Cunha opened the intercultural week 2021 in the youth monastery. Afterwards, a traditional dance of our Indonesian volunteers was presented with singing and dancing which is part of every festival on the island of Sumba. This was followed by an insightful presentation on the geography of the island, life, traditions and religions of the people of Sumba – accompanied by impressive pictures of an island that has so far remained largely undiscovered by Tourism.

In Germany, the Kirchhellen “Indonesians” reported on the millennia-old mega-lith culture, which is still a reality lived by many people from Sumba, the Marapu religion, the Pasola (announcement of the harvest), the funerals and above all, Rumah Budaya. Founded by the Redemptorist Fr. Robert Ramone, the cultural centre aims to document Sumba’s rich cultural past and preserve it for posterity. After the lecture, the guests had time for interaction about the life on Sumba like What foreign languages do the children learn at school? How do the different religious communities get along with each other? How do most residents earn their living etc?

In the further course of the evening, one could experience first-hand how festivals are refined in Indonesia. In addition to Indonesian songs sung together, there was also the opportunity to embark on an exotic culinary journey. Nasi Goreng and Sambal Olek – two typical Asian dishes – were specially cooked by our volunteers for the Kirchhellen guests. Of course, in the sense of the one common home of all humanity (Pope Francis), the food was then served on plates and was eaten with spoons made of (compostable) bamboo.

Afterwards, there was dancing in common. After the presentation, all the chairs were set in a large circle, so that there was plenty of space to dance in the middle. It was indeed a joyful moment that even some very old visitors danced along. On Sumba, it is considered a special tribute when old women dance.

A big thank you goes to our Indonesian Fathers and volunteers, who always manage to bring a piece of Indonesia to our homeland – even in everyday life. With their donation to Rumah Budaya, the visitors have given a clear sign of appreciation and thanks for the wonderful cultural evening and the important work of the cultural centre.

Perhaps this evening also contributed a little to the realization of the WE of all people, to which Pope Francis invited in his letter on the World Day of Migrants and Refugees 2021.