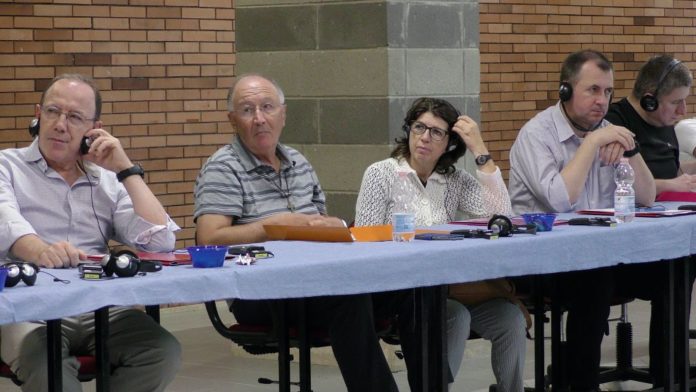 After about two years, the Provincial Superiors, gathered for the 14th Assembly of the European Conference of Redemptorists, met again in presence. This meeting was held at “Il Carmelo” in Ciampino (Rome) on 4-7 October 2021. It also served as a testing ground since the next General Chapter will occur in the same spot in 2023.

Fr. Johannes Römelt, Coordinator of CRE, the Provincial Superiors, accompanied by their vocals, of the 12 Provinces plus 1 Vice-Province, which make up the European Conference (CRE), took part in the meeting. These meetings were blessed with the presence and guidance of Father General Michael Brehl and the General Consultors Alberto Eseverri and Pedro López.

The joy of meeting again in the presence and exchanging ideas not only during the work sessions but also after the microphones were turned off was immediately apparent.

The work of the Assembly was carried out in Sessions, two in the morning and two in the afternoon, in which the various documents prepared by the CRE Commissions were analysed by language groups, sharing the reflections in the plenary meeting.

Another moment of sharing was the report of the three zones of Europe, North, South and East, on the work done so far in the path of Reconfiguration. Each zone has different needs and problems linked to its own territory and its tradition. Still, the common conviction was that the journey begun is irreversible and is already well underway. The timeframe will be different because each zone has a different path to follow, but the goal set for the reconfiguration is now well in sight.

Last but not least, in terms of importance, the theme of the Partnership in Mission was explored, which sees the Lay Partners in mission with the Redemptorists. Even though there are still some obstacles at the canonical level to be overcome, and this was taken care of by the General Government which will call upon a team of canonists, all unanimously underlined the richness and the breath of freshness and motivation brought by the enthusiasm with which the lay partners participate in our mission and the shared experiences.