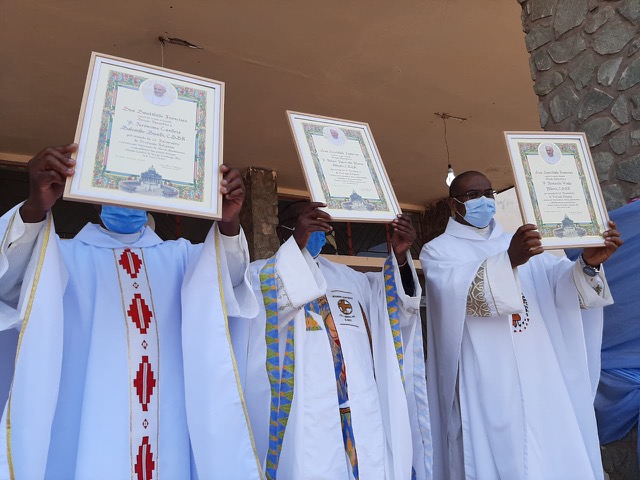 The Catholic community of Cunhinga, Bié province, Angola continues to celebrate the mission of proclaiming the Abundant Redemption with enthusiasm despite the pandemic.

In fact, last 1st August, the Solemnity of Sto. Afonso, all the roads of the Vice-province, led to the Parish of Our Lady of Perpetual Help (Catholic Mission of Vouga) in the municipality of Cunhinga, Bié province. There the Redemptorists of Angola celebrated the silver jubilee of the religious consecration of Frs Jerónimo Candeia, Armando Alberto and Nelson Ndyelo. Twenty-five years ago, Jerónimo and Armando made their profession in Brazil (28/01/1996) and Nelson in RDCongo (28/09/1996). Therefore, this moment of thanksgiving was also an opportunity to express gratitude for the contribution of the Province of São Paulo (Brazil) and the Vice-Province of Matadi (Congo) to the formation of Redemptorist Missionaries in Angola.

The Eucharist was presided over by Mgr. José de Queirós Alves, CSsR, Archbishop Emeritus of Huambo, who returned to the Redemptorist community three years ago after finishing his episcopal ministry. Bishop Queirós gave us a very rich sermon, centered on the passion of St. Alphonsus for Jesus Christ and for the poor. He encouraged the jubilee confreres to be inspired by our Holy Founder, renewing each day their commitment to follow the Redeemer more closely and serve with generosity the beloved People of God, especially the most abandoned. The liturgical animation was full of spirit, colour and dance, African style, in a harmonious ensemble that extended to the lunch and conviviality that followed. Only the use of masks and other biosecurity measures reminded us that we were in a time of pandemic; everything else told us that we were in a time of celebration and gratitude.

The three brothers, Jerónimo, Armando and Nelson, in addition to their direct priestly ministry, extend their mission in various charisms: Fr. Jerónimo is a born animator of the Holy Missions; Fr. Armando has been serving the Church in Angola for many years as the main dynamizer of the Youth Ministry of the Episcopal Conference; Fr. Nelson is a full-time missionary for the wounded and the afflicted; all of them are also teachers of the younger generations. Thank you, dear brothers, Nelson, Armando and Jerónimo, for keeping the flame of the redemptive mission alive in Angola!