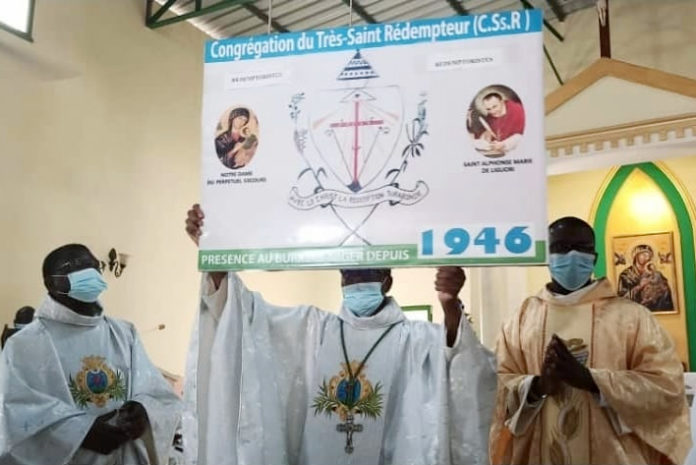 The Redemptorist confrères of the Vice-province of West Africa celebrated the 75 years of the founding of the Redemptorist mission and presence on 8th January, at Ouagadougou, Burkina Faso, and the day of thanksgiving on 9th January at Miamey, Niger.

The Vice-Province of West Africa bears witness to its gratitude to the Lord for the 75 years of missionary presence in West Africa. On May 28, 1946, the Sacred Congregation of “Propaganda Fide” was officially authorized by a rescript, the sending of Redemptorist Missionaries to participate in the work of evangelization in the Sahara. Following the rescript of the “Propaganda Fide”, Father Constant Quillard and five companions embark for French West Africa and then become the founders of the Redemptorist mission in this land of French territory in West Africa.

It’s been 75 years (1946-2021) of the Redemptorist presence and proclamation of the Gospel in West Africa. Glory be to God in the highest heavens. This jubilee feast is also an invitation for us to be true witnesses of the Gospel and the grace of God following our vocation and living out the charism of the Congregation.

During this celebration of the closing of the jubilee which began at 9:00 a.m. GMT, there was also the diaconal ordination of six Brothers, including 4 Redemptorists and 2 religious of Saint Vincent de Paul. We are, moreover, in the communion of prayer with the confreres in Niger who will celebrate this alabaster jubilee tomorrow at the Cathedral of Our Lady of the Perpetual in Niamey. We entrust our confrere, Brother Firmin Afanou, who will also be ordained as a deacon.

May God bless all the Redemptorists and their Associates. May the Lord strengthen their hope and give them the strength to zealously continue the mission of salvation in ever greater solidarity with the wounded world.