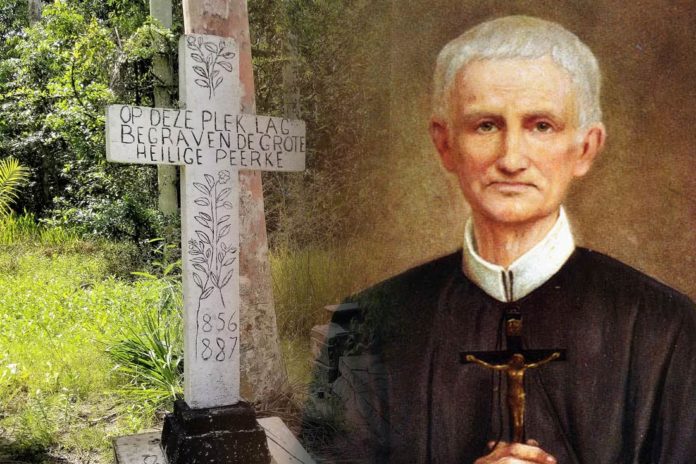 PETER DONDERS WAS BORN IN TILBURG IN HOLLAND on October 27, 1809. From his youth he felt himself called to the priesthood, but, because of the poverty of his family, his schooling was cut short so he could take up the weaver’s trade of his father. This did not prevent him from teaching catechism to children in his free time. He also had a good influence on young people his same age. At the age of twenty-two, with the help of his parish priest, he entered the minor seminary of St. Michael-Gestel as a seminarian and part-time worker, thus paying for his room and board. He was ordained a priest on June 5, 1841. He was able to follow his missionary vocation, setting out for Suriname, which was then a Dutch colony.

For the next fourteen years, his base of ministry was in the city of Paramaribo where he dedicated himself to some 2,000 resident Catholics and also regularly visited the slaves of the plantations (around 8,000 of them in the Paramaribo area of some 40,000 in all of Suriname), as well as the military garrisons and the native Indians and black slaves along the rivers. In 1856, he offered himself as a volunteer for the government leprosarium of Batavia, where he remained, with the exception of a few short intervals, for the next twenty-eight years, caring for the residents bodily and spiritually. He left them, only for a few months, in 1866, when he asked to join the Redemptorists to whom Pope Pius IX had confided the Apostolic Vicariate of Suriname. He was invested with the religious habit on November 1 of that year and professed his vows on June 24, 1867.

Religious profession, in associating him with a missionary congregation, gave him a more vivid sense of the apostolic life in community, allowing him to leave Batavia more often to give himself to the conversion of the native Indians and black slaves. But the name of Donders remained bound to the leprosarium of Batavia. He died among his lepers, poor among the poor, on January 14, 1887, mourned as their benefactor and invoked as a saint. Pope John Paul II beatified him in St. Peter’s on May 23, 1982, during the 250th jubilee year of the Congregation of the Most Holy Redeemer.
(Text from the Missal)

Father, you showed your wonderful mercy toward lepers through Blessed Peter, your priest.
By his example and prayers may we serve you through our loving care for those who are in the greatest need.
We ask this through our Lord Jesus Christ, your Son, who lives and reigns with you and the Holy Spirit, one God, for ever and ever. Amen.