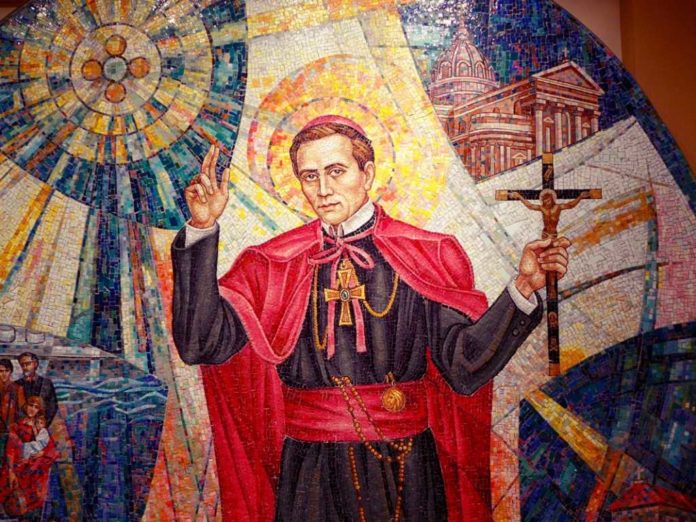 “He was close to the sick, he loved to be with the poor, he was a friend of sinners, and now he is the glory of all emigrants.” – with these words Pope Paul VI summarized the activity of St. John Neumann, redemptorist, bishop of Philadelphia (Homily on the occasion of Neumann’s canonization, June 19, 1977).

John Neumann was born in Prachatice in Bohemia (now the Czech Republic) on March 28, 1811. He studied theology in the seminary of Budweis. Zealous for the missionary life and to lead souls to Christ, he decided to leave his homeland to dedicate himself to the European immigrants in America, who were deprived of spiritual support.

Neumann was ordained a priest by the bishop of New York in June 1836 and gave himself to the pastoral care of people in the vast area around Niagara Falls.

Wanting to live in a religious community that corresponded more to his missionary vocation, in January 1842 he entered the Redemptorists. A tireless missionary, Neumann busied himself in particular with the German immigrants, first in Baltimore, then in Pittsburgh.

Having filled the role of vice-provincial superior of the Redemptorists from 1846-49, he became the parish priest of St. Alphonsus Church in Baltimore. In 1852, at the age of 41, he was named bishop of Philadelphia.

Neumann had a strong effect on the religious life of the United States by founding Catholic schools and promoting devotion to the Eucharist. He founded a new religious institute—the Third Order of Saint Francis of Glen Riddle. The School Sisters of Notre Dame likewise regard Neumann as their secondary founder, their “Father in America.” In just seven years, he built 89 churches, as well as several hospitals and orphanages. As a bishop, Neumann was untiring in visiting his vast diocese.

O God, you wished your bishop, Saint John Neumann,
to shine forth for his pastoral ministry among the most abandoned.
Grant, that imitating his untiring zeal for holiness
in the discharge of daily works,

we may be able to serve your church fruitfully.
We ask this through our Lord Jesus Christ, your Son,
who lives and reigns with you and the Holy Spirit,
one God, for ever and ever. Amen.