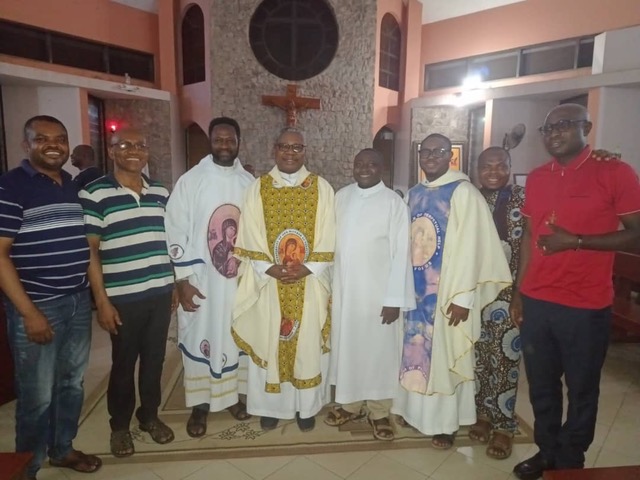 In early January 2022, the Vice-Provincial council proposed a three-day working retreat to the Superiors, Parish priests, directors of apostolates, chaplains and Rectors of Shrines. The idea was generously welcomed. In spite of the prevailing difficulties of travel within the country, including the current fuel scarcity crisis, all 46 confreres made their way to Ibadan on February 22, 2022, for this important time of reflection together as the extended leadership team of the Vice-Province.

The next two days were spent together in prayer, reflecting on stewardship for the past four years and looking into the future. The event started with a creative prayer, after which a votive Mass of the Holy Spirit was celebrated. Fr. Jude Anyaegbu, C.Ss.R, the Vicar of the Vice-Province presided over the Mass and in his homily enjoined the assembly to be disposed to the movement of the Spirit. He was flanked by Frs. Steven Okechukwu, C.Ss.R. and Michael Ehibhoria, C.Ss.R.

The program was also designed for the confreres to “come and rest awhile”. The first working day featured a talk from an expert titled “Work-life balance”. The speaker Sir, Jacob Audu, KSM an accomplice author and public speaker, enjoined participants to take rest as sacred as their pastoral duties and to build strong partnerships with priests and lay collaborators in order to avoid burnout.

In the afternoon, confreres brought out their football boots as they played a football match with the student community. With the help of the suspicious referee skills of the Vice Provincial, the game ended in a draw. It was fun and aftermath joint pains for the confreres in ministry.

Two full sessions were dedicated to reflection on the experience and ministry of the confreres in the leadership team. A lot of wisdom was shared and received by the assembly. The council also shared their experience of working together as a team. The sessions were honest and sincere.

Perhaps the highlight of the whole celebration was the healing services that started each of the six sessions that punctuated the gathering. The prayer format used was specially put together for the Vice-Province by confreres in the Denver Province. Many confessed to how deeply moving and inspiring the services were. It featured prayers of healing, reconciliation and restoration. The assembly was one in the spirit of letting go of hurts from the past and moving forward to a future filled with greater possibilities for our confreres, communities and our Vice Provincial community.

The confreres agreed unanimously to communicate the spirit of the retreat to the whole Vice Provincial community by having these healing services in all communities at least once a month. They agreed to produce a document to send this message to all confreres in the Vice-Province.

We ended with a votive Mass of Our Mother of Perpetual Help presided over by the Vice Provincial, Fr. Joterio Aghoja, C.Ss.R. we placed our Vice-Province under her maternal care as we continue to strive for faithfulness to the mission of the Congregation.