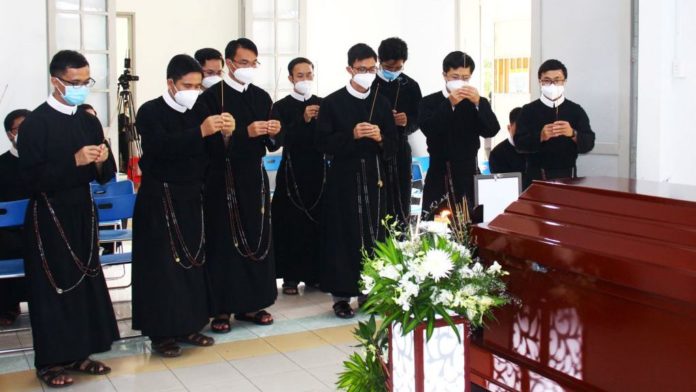 A reflection of one confrere from Vietnam:

He is too young! – was the first thought of mine and many other people when we heard the sad news that brother Joseph Hoang Van Duc, C.S.sR., suddenly passed away overnight. He was just 30 years old and more than a half year of first professing the religious vows.

The joy of wearing the religious habit and attending the mass at his home parish was still fresh in his mind and heart during his recent holiday at home. However, now the unfulfilled dream must be left to return to the Heavenly House of our Father.

Of course, it is a purpose of the religious men and women to be united with Christ and his saints in heaven, but in terms of human perspective, I still feel sad about his sudden death. His vocation journey has just begun at the first steps, but now it must stop at the age of 30, the age of being matured and grown-up. The age of 30 in my culture is the age of being successful when you start to harvest the fruits of your hard work.

His pass away filled the hearts of many friends, relatives and Redemptorists with emptiness and sadness, especially his parents. They had just said goodbye to their son some days ago before he returned to our seminary. And now, the sad news came unexpectedly. How can they bear the tears of sorrow? Reflecting on his death, I recognised three positive things which can give us hope of goodness out of sadness.

First, he had just come back to the seminary after his holiday of Lunar New Year. He just said goodbye to his parents, family and friends even though he did not know in advance: This is the last farewell for them. He must also have enjoyable and meaningful days with beloved ones in his hometown. So, at least he had some preparation for his eternal journey to God’s House.

Secondly, he passed away peacefully over the sleep. In the language of many people, he had a peaceful death. The tradition of Redemptorist asks each religious brother and priest to say this beautiful prayer before turning off the light every day: “O Lord, I know for sure I will die. Perhaps, I might die soon. Maybe tonight I will go to sleep, and tomorrow I will not wake up. Therefore, you remind me to prepare to go to bed as to go to the tomb.” I think that each faithful and especially religious brother and sister should reflect on it daily.

Thirdly, he died in the seminary, where he committed himself to religious life and studying. Reading his biography, we know that after graduating from the famous Polytechnique university in Vietnam, he entered the aspirancy of Redemptorist. After getting the university degree, which promised a lot of things for his own life, he put it away to pursue “the degree of heaven.” Our founder, Saint Alphonsus, said that: Whoever perseveres in the Congregation will be received in the Kingdom of God. I believe that our late confrere persisted in his vocation, and now, he might reunite with all the Redemptorist saints.

With those three points of reflection, I feel comforted to some extent about his death. May the soul of brother Joseph pray for us, the Redemptorist remained in this world, to know how to prepare ourselves to welcome God and try our best to proclaim the Good News of God’s Kingdom. Amen

Brother Joseph HOANG VAN DUC, C.Ss.R:
He was born on 24 May 1992 in Nam Dinh province;
First professed: 30 June 2021;
Rested in God on 07 February 2022, in the Redemptorist Community of Mai Thon (Saint Alphonsus Theologate), after 30 years of being God’s child and 7 months of living the religious vows.

Please pray for the soul of Brother Joseph to be received in the Kingdom of God soon. RIP