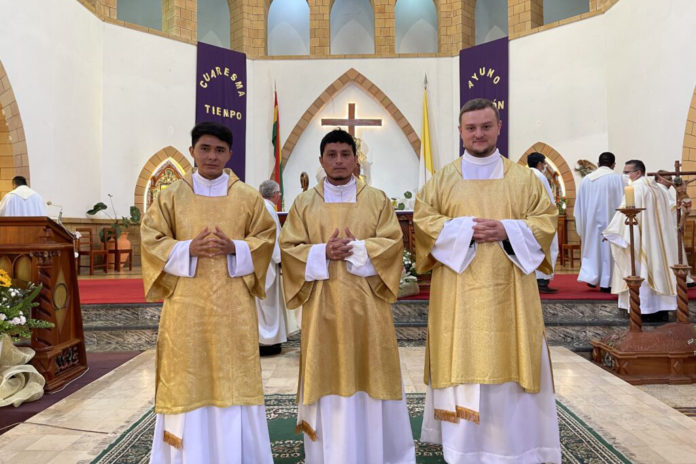 At the Eucharistic celebration, there was Fr. Cesar Provincial Superior of Peru, and Fr. Boris Calzadilla Provincial Superior of Bolivia. Accompanied by other Redemptorist priests, relatives of the new deacons, friends, and faithful. Father Boris initiated the process of the diaconate by calling the three seminarians to the Bishop to begin the rite of diaconal ordination.

At the beginning of his homily, Archbishop Estanislao affirmed that this date will forever be inscribed in the history of the Church, of our Archdiocese, of this parish church of Vallegrande, and above all of the Congregation of the Most Holy Redeemer in Peru and Bolivia. As ministers of the altar, you must proclaim the Gospel, prepare the Eucharistic sacrifice and distribute the Body and Blood of the Lord to the faithful, said Monsignor to the deacons.

Likewise, he asked the new deacons of the Church to proclaim the Gospel with perseverance, generosity, enthusiasm, but also with courage, because this is what the world expects today. And that with the testimony of their lives they are called to show that the Gospel is pleasing and that it can be the beginning of one’s life.

He was born on 22 September 1993 in the village of Ucumayo, a populated center of Churuyacu, Tabaconas district, San Ignacio province, Cajamarca-Peru department. He is the son of Mr. Félix Alvarado Velasco and Mrs. Cándida Suárez Chinchay, he is the third of four brothers. His father works as a catechist in his community.

He never met the Redemptorist Fathers, but thanks to a religious aunt of Franciscan spirituality. He came to the Congregation because at that time they were working with the Redemptorists in Rímac-Lima. He completed his novitiate in Bolivia (Cochabamba) in 2015, his first religious profession was on February 2, 2016, in this same city. His pastoral year took place in the Parish of “Nuestra Señora de la Candelaria”, in Rurrenabaque, Provincia del Gral, José Ballivián-Beni. His second novitiate took place at the Marianella Multifunctional Center, Atyrá-Paraguay. With the grace of God, on March 15, 2022, on the feast of St. Clement Maria Hofbauer, he made his perpetual vows.

He was born on November 13, 1992, in the department of Cajamarca in Peru. He entered the seminary on March 1, 2010. In 2015 he completed his novitiate in Cochabamba Bolivia, along with nine other brothers: Argentina, Paraguay, Bolivia, and Peru. In 2019 he completed all his studies in philosophy and theology. And in 2021 he spent his pastoral year in Vallegrande- Santa Cruz- Bolivia. From January 3 to February 18 he made his second novitiate in the country of Paraguay.

He was born on March 3, 1995, in Tarnow – Poland, he was baptized on March 5, 1995, in the parish of Our Lady of Fatima in Tarnow. He received the sacrament of Confirmation on March 8, 2011, at the Church of the Sacred Heart of Jesus in Tarnow. He entered the Congregation on 22 September 2014, the first vows were made in Lubaszowa, on 15 August 2016, and the perpetual vows were celebrated in Vallegrande, on 15 March 2022.