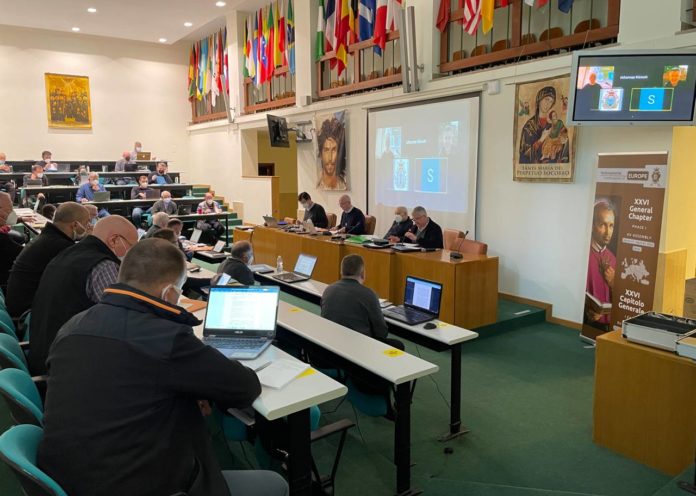 The First Phase of the General Chapter in the Conference of Europe began on Monday 21 March and will continue until 1 April.

Michael Brehl, Superior General, the General Councillors Frs. Alberto Eseverri, Pedro López and Nicolás Ayouba, the Coordinator of the Conference of Europe, Fr. Johannes Römelt, the Major Superiors of the Units of the Conference and their respective vocals, the Superior of the Mission of Albania, two Brothers and three Lay people. The moderators of this phase in Europe are Frs. Gianni Congiu and Piotr Chyla. Two notaries and two translators accompanied the meeting.

The three representatives from Ukraine that are accompanying their people in this time of war, were unable to participate in person. However, Fr. Andryi Rak, Provincial Superior of Lviv, after the opening greetings at the beginning of the Chapter, connected with the Capitulants via zoom and presented the difficult situation they are experiencing in the country and in the Redemptorist Province. The confreres of Ukraine are welcoming the refugees in their communities and parishes and are accompanying the faithful by sharing their material goods and encouraging them with prayer. Fr. Andryi thanked the Congregation for the support they are receiving, especially from the Provinces of Warsaw, Bratislava-Prague and Viceprovince of Michalovce, and asked for our accompaniment in prayer.

Fr. Laureano del Otero presented to the Assembly the situation of the Redemptorist Mission in Albania and the future plans to strengthen our presence in this country which is particularly open to evangelisation.

We now begin a particularly important work for the development of this First Phase of the Chapter: to study and enrich the working document, to elaborate the strategic plan of the Conference of Europe, the study of the postulates presented and to propose names for the services of Superior General and Consultor of the Conference.

The celebration of the Eucharist, the daily prayer, the excellent atmosphere of conviviality among the participants of the First Phase of the General Chapter and the prayer of all the confreres and lay associates of the Conference will make it possible for this meeting to bear abundant fruit.