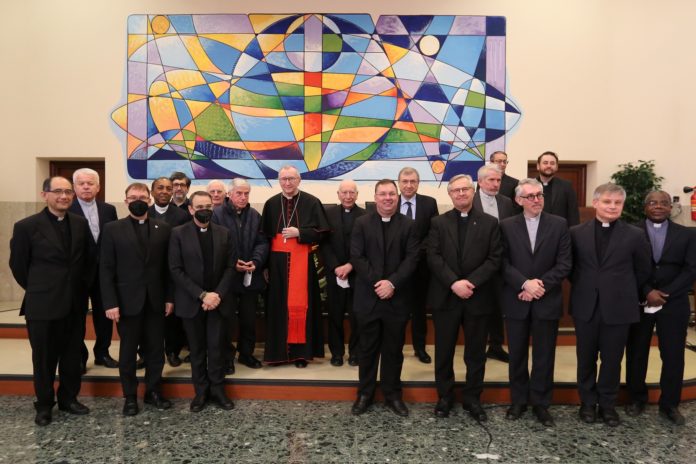 On March 24, in the Aula Magna of the Accademia Alfonsiana in Rome, a Study Day was held on the occasion of the solemn closing of the 150th anniversary of the proclamation of St Alphonsus as Doctor of the Church. The session was attended by Cardinal Pietro Parolin, Secretary of State of the Holy See. It was impressive to see him sitting in the front row, humbly taking notes in his little notebook on what the professors were saying.

The day began with a greeting from Fr General Michael Brehl, which was read by the dean of the Accademia Alfonsiana, Fr Alfonso Amarante. This was followed by a lecture by Redemptorist Father Sabatino Majorano, professor emeritus of the Accademia Alfonsiana, entitled “Moral Truth as Salvific Truth”. Majorano, an internationally recognized expert in Alphonsian morality, began his speech by quoting the work of Prof. Marciano Vidal on the moral theology of St. Alphonsus. His presentation highlighted the centrality of conscience in morality, understood as a path of personal transformation.

Prof. Antonio Autiero, professor emeritus of the University of Münster (Germany), took the floor on the theme “Alfonso M. de Liguori in the tangle of modernity”. Autiero presents Saint Alphonsus as a theologian of modernity and calls for a broad understanding of this historical phenomenon, avoiding condemnatory simplifications.

The lectio magistralis of the day was delivered by Cardinal Pietro Parolin, Secretary of State of the Holy See. He spoke on the theme ‘Mature consciences for an adult church, for fraternity and social friendship’. This lecture linked the theme of the formation of conscience, central to the Alphonsian tradition, with Pope Francis’ latest encyclical, Fratelli Tutti, and his project for ecclesial reform. Finally, Prof. Vincenzo Buonomo, layman and jurist, Rector of the Pontifical Lateran University, closed the day. The meeting continued with a festive lunch in the community refectory.

It was an important moment of encounter, not only for the number of participants and the high level of the lectures but also for the confirmation by the Holy See of the theological work being carried out by the Accademia Alfonsiana, the depositary of the theological heritage of St Alphonsus, Doctor of the Church and patron of moralists and confessors.