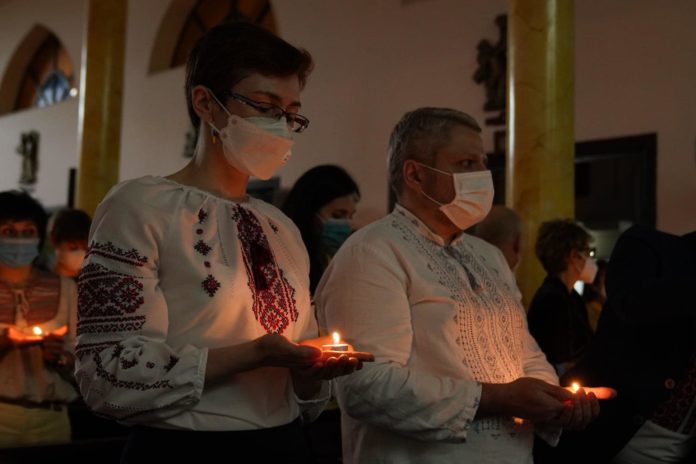 Vietnamese Redemptorists in the Shrine of Our Mother of Perpetual Help in Thai Ha Parish, Hanoi, held a special Mass to pray for peace and consecrate Russia and Ukraine to the Immaculate Heart of Mary.

The Mass on March 27 was presided over by Father Joseph Trinh Ngoc Hien, the superior of the Hanoi Redemptorist Monastery, and more than 1,000 lay parishioners were present.

Prominent among those present was Nataliya Zhynkina, chargé d’affaires of Ukraine in Vietnam, and the embassy staff members. Also present were Antonio Alessandro, the Italian ambassador to Vietnam, and his wife.

Father Vincent Tran Tri Tue announced that the Mass was organized “in response to the invitation of Pope Francis to call to pray for peace and consecrate Ukraine and Russia to the immaculate heart of Mary.”

He then introduced the members of the Ukrainian and Italian embassies to the parishioners.

In his homily, Father Joseph Nguyen Van Toan quoted Pope Francis on the tragic situation of children, women and Ukrainians due to the Russian invasion.

He invited everyone, especially young people, to sympathize with and have compassion for the Ukrainian people, say no to war and support peace.

After the Communion Prayer, the priests and parishioners lit candles. They sang the peace prayer of St. Francis of Assisi and then recited the prayer of Pope Francis consecrating Russia and Ukraine to the Immaculate Heart of Mary.

Nataliya Zhynkina said in gratitude that “more than 2,000 years ago, Pilate asked Jesus an important question, ‘What is truth?’ Pilate saw that Jesus was innocent, but he did nothing to save him. He washed his hands as an act of innocence in the incident. Today, in light of what is happening in Ukraine, we are also asking, ‘Is the truth still there?’ We do not turn a blind eye to what is happening.”

She further said that if the Russians use nuclear bombs, the lives of all people across the globe will be at stake, along with the Ukrainian people. “Today, you are praying for Ukraine, but you are also praying for yourself,” she added.

At the end of the Mass, Father Joseph Trinh Ngoc Hien handed over the collection during the Mass and other aid material to the ambassador of Ukraine as a gesture of sharing and solidarity.