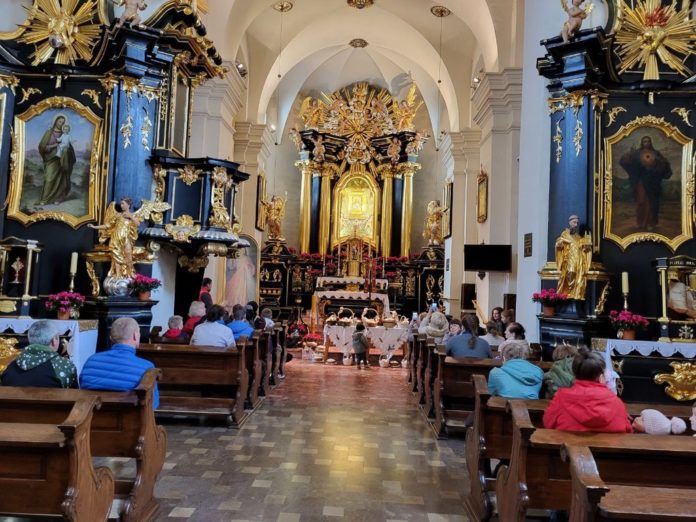 (Tuchów, Poland) According to the Julian calendar, last Sunday was the Feast of the Resurrection of Christ. On Saturday, at the Sanctuary of Our Lady of Tuchów, the blessing of food for Orthodox Christians and Greek Catholics from Ukraine took place who found shelter in the town.

The ceremony was presided over by Father Roman Dubec, prelate of the Orthodox Cathedral of the Holy Trinity in Gorlice, invited by the Redemptorist Fathers of Tuchów. Beforehand, information about the consecration of food was distributed in the Tuchow municipality and more widely.

Many refugees came to the Tuchow sanctuary, having found shelter in the municipality and the neighbouring villages. Children from Ukraine, who are staying in Tuchów, received Easter baskets. They contained, among other things, traditional Easter eggs and Easter cake, the so-called Pascha. The paschal cakes were baked in the Redemptorist monastery kitchen according to a recipe provided by the Ukrainian women.

On Saturday evening, a group of refugees living in Tuchów, together with Father Kazimierz Piotrowski CSsR, went by bus to Gorlice to the Orthodox Cathedral for Easter night liturgy. Strengthened by the spiritual experience, they returned to Tuchów in the morning.

The Redemptorists in Tuchow accommodated a group of several dozen Ukrainian refugees. They made a pilgrim house available to them, where almost 40 people, mainly women with children, are currently living. The number is changing because those who have family in other countries are trying to join them.

See the video from the event