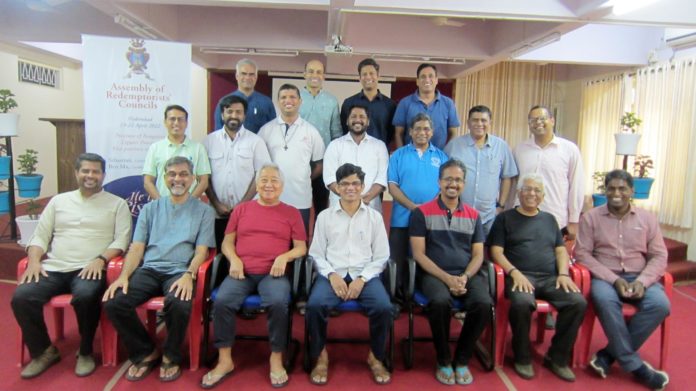 (India) The Joint Councils of the 3 Units in India (Bangalore, Liguori and Majella) gathered for their annual meeting in Hyderabad, India, from the 19th to the 21st of April. Fr Jovencio Ma, the Conference Coordinator of Asia Oceania was present. Fr General sent a video message to the meeting.

The Meeting discussed the working of the many Joint Secretariats and Commissions (Evangelization, Formation, RYVM, Media Ministry, Common Voice, etc.). Reports were presented and plans discussed. The Meeting also discussed concrete plans for the future of this Group 1 of the Conference of Asia-Oceania and its path ahead to becoming a Confederation of India in the Conference. Short term common projects (in Youth, Migrant, Care for Creation) were planned and two long term common projects for mission in India were also planned (A new Common Foundation in Northeast India and Collaboration with CHAI (Catholic Hospitals Association of India) for palliative care and care for special needs children). Work towards a Common Ratio for Formation in India, A Common Syllabus and Handbook for all stages of formation continues. A draft for the Statutes of the Confederation was presented and discussed and this will be further edited and presented to the Councils at the next meeting. Various plans for involving all the confreres in the 3 units in the process towards being a Confederation were discussed and passed. The Councils were unanimous in their resolve to move forward towards being a Confederation and have planned 1st August 2024 as a date for the inauguration of the Confederation of India.

The Silver Jubilee of Ordination of Fr Edward Joseph, Provincial of Bangalore was celebrated during the meeting with a solemn mass and festive meal. The group enjoyed the hospitality of CHAI (Catholic Hospitals Association of India). The director Fr. Mathew Abraham, C.Ss.R. and the Administrator Fr Sarath Maddineni, C.Ss.R who form the Redemptorist presence in the Organization went out of their way to extend the hospitality of CHAI as well as present plans whereby CHAI can collaborate with the Redemptorists in reaching out to two groups of wounded people we find in our parishes and communities that we serve (special needs children and terminally ill patients and their families).

The group while emphasizing the amount of work done in this quadrennium towards being a Confederation in India noted that there is much that needs to be done as we move forward as One Body in India, in the Conference and in the Congregation.