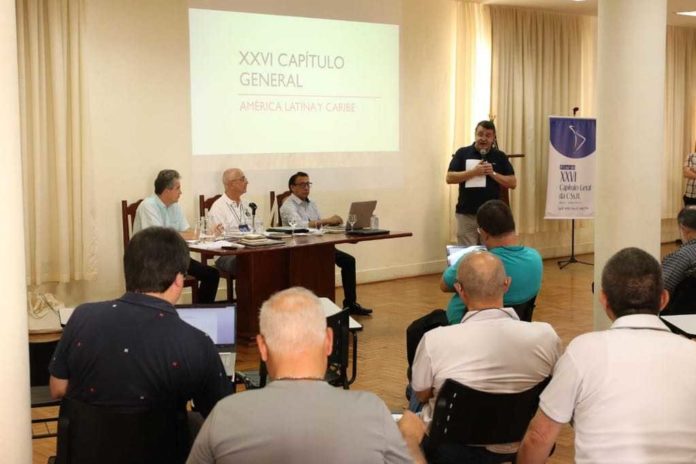 Aparecida – Sao Paulo in Brazil, the City of Our Lady of the Conception of Aparecida – Patroness of Brazil, is the place chosen to host the meeting for Phase I of the 26th General Chapter in the Conference of the Redemptorists of Latin America and the Caribbean. This first phase began on Sunday 24 April at the St. Alphonsus Seminary of the Province of Sao Paulo and began with the celebration of the concelebrated Eucharist in the Sanctuary of Aparecida, presided over by the Superior General.

In the meeting, among the participants are Fr. Michael Brehl, Superior General, together with two General Consultors, the Coordinator of the Conference of Latin America and the Caribbean, the Procurator and the General Treasurer, together with the representatives of the units of Latin America and the Caribbean: major superiors, elected vocals, brothers and lay people.

The chapter members are working intensively. There are two sessions in the morning and two in the afternoon, combining presentations, working groups, reports and plenary sessions.

For two weeks, the chapter members will work on themes related to the Congregation as a whole. These will be supported by presentations and reports, accompanied by the dialogue of the participants. One of the objectives will be to concretise the evaluation of the situation of the life and mission of the Redemptorist Missionariesin Latin America and the Caribbean, and to envision the future in different areas, such as mission, and formation, shared mission and leadership, among others.

It is important to recognise that Redemptorists in Latin America and the Caribbean face diverse challenges in their mission, in the service of the proclamation of the Gospel. The Redemptorist charism is always a joyful response to the call of Jesus the Redeemer to “evangelise the poor”, especially the most abandoned: the peripheries of the big cities, the presence of migrants, the new family and social structures, the youth, the indigenous and Afro-American population are, among others, points of study that all the units keep in mind. But at the same time, in order to better serve the world and the Church, the Redemptorist communities want to strengthen their community life, their spirituality and their leadership, and to this end, some apostolic priorities will be identified. In addition, the formation of young candidates for Redemptorist life will have to take into account a greater availability for the mission in other countries, languages and cultures.

The Redemptorist Missionaries in Latin America and the Caribbean are in the process of conversion and restructuring through a project of reconfiguration of the existing units, which began approximately 30 years ago, and which requires attention, effort, patience and trust in the Lord who guides our steps. One of the challenges for the future is the creation of seven large units in Latin America and the Caribbean, uniting the confreres of the continent in new structures. In addition to this union of forces and hearts, new objectives will also be taken into account, such as the creation of international communities, or the strengthening of solidarity with weaker units.
The atmosphere of fraternity, joy and closeness among the 60 participants of this first phase is remarkable.