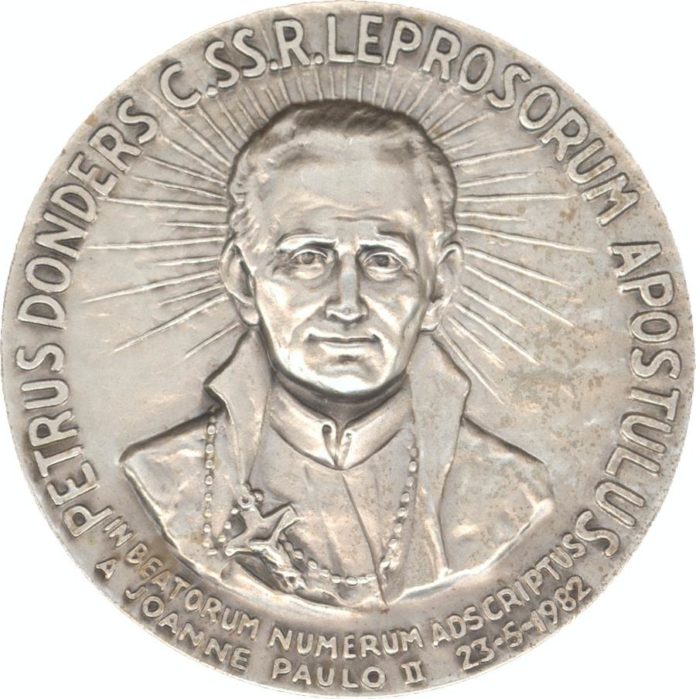 Today, 40 years ago Peter Donders was beatified. Eight days ago, Sister Marie Rivier was canonized, as the second – after Brother André Bessette – of the four people beatified together with Peter Donders. There has probably never been a controversial statue erected for her. In any case, she, too, like Blessed Peter Donders, is the object of some devotion in the Philippines: it was there that the miracle happened through her intercession that made her canonization possible.

The discussion in recent years about the (preservation in the public arena of the) statue of Peter Donders in the Wilhelmina Park in Tilburg has not yet died down, but the city council has made a decision: A sign with an explanation will be placed next to the statue. The provisional version of the text on that sign distinguishes, among other things, between colonial rule and the person of Peter Donders. The context of siting the statue is explained in a very limited way with “At that time [1926] that way of depicting things was common.”, followed by the statement “Today we see in this an unmistakable symbol of colonial rule.” Further on, the text states: “Today we look very critically at our colonial and slavery past. A painful and confrontational chapter in our history. In Tilburg we do not shy away from discussing this […] The image that you have before you is therefore controversial. But it also invites you to take part in that conversation. Keeping this image in public view is a topic of this ongoing conversation in the city about our history, about our slavery past. And also about the inclusive city we want Tilburg to be.”

The wording chosen by the municipality of Tilburg itself can certainly also be discussed, but what strikes me about the intended explanation is that even more than in the discussion of past years, it has – except for the word ‘priest’ – been stripped of references to faith and religion. In the article “Religion was a means of oppression for centuries, but also a source of inspiration for resistance‘ by a writer with a Surinamese background, these are given greater attention and in an interesting way. In this article from the series ‘Concealed history’ Karin Amatmoekrim refers, among other things, to a discussion about the statue of Father Damiaan de Veuster as a representative of Hawaii in the American Capitol building and to the adaptation of the ‘myth of Damien as a heroic figure to the prevailing mores’. At that point, she has already mentioned the discussion about the statue of Peter Donders. She then resumes it with the words “To sustain a hero, he must be set in time over and over again. Anyone who these days emphasizes that Peerke Donders ‘himself sat on his knees among the people’ can continue to honour him for the time being.” Referring to her personal experience as an outsider to religion, she writes, “I knew nothing about religion, but it was clear to me that these were just a handful of stories from a distant past — with a thousand interpretations of these stories.” She also sees the discussion about the statue of Peter Donders as confirming her experience that religion is always a form of interpretation.

It has now been 135 years since Peter Donders died. In a conversation with the person who subsequently sent me the above article, there was one beautiful sentence “We must not rewrite history, but interpret it again and again, thus, do not remove the statue, but explain it”. A next step seems to me, in analogy to what Pope Francis urges us to do in number 11 of Evangelii Gaudium, is to keep returning to the source. Then the focus will be less on images of Peter Donders, but on his story, which will be recovered in its original freshness and told in new ways, creatively, with more eloquent signs and words with new meaning for today’s world. The essence of what Peter Donders did was without a doubt: to proclaim the gospel in word and deed and thus to bring joy into people’s lives, to let them experience God’s love. In the Philippines, this story is being passed on to the present generation of believers by, among others, some young acolytes, catechists, and custodians of relics who hold a specific devotion to Blessed Peter Donders. Perhaps the miracle needed for his canonization will someday happen there as well.