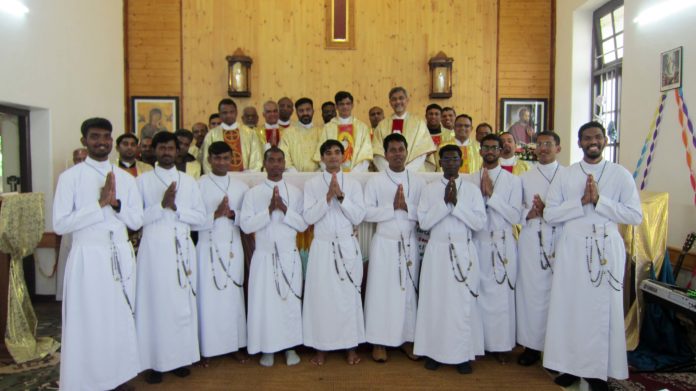 On the 14th of June 2022, 10 novices, 6 from the Province of Bangalore (Sebinus, Shekhar, Joshua, Vinod, Deepak and Vikas) and 4 from the Vice-Province of Majella (Roshan, Lennox, Viketh and Richard) made their first profession at Kotagiri in the Nilgiris, Tamil Nadu.

A very noteworthy and historic moment was that Sebinus Biam, a novice from the Bangalore Province was professed as a Brother. He is now the first Brother to be professed in the province for over 40 years. He hails from the Northeast State of India Meghalaya and is excited to be a Brother in the Congregation. He is an excellent musician and is excited to play music throughout his life serving the mission of the Lord as a Redemptorist Brother.

Fr Ivel noted that each of the newly professed despite their own personal woundedness is called and sent out by the lord to play music through their lives proclaiming the redeeming love of the Lord being his instrument of healing in a wounded world today. Nine of the newly professed leave for Varca in Goa to begin their Philosophy studies while Bro Sebinus leaves for Bangalore to begin his special studies in Religious life for Brothers. Fr Edward thanked the Novice Master Fr Jaison of the Province of Liguori, Fr Lester, the Socius of the V. Province of Majella and the Rector, Fr Sahaya of the Bangalore Province for accompanying the novices in their journey through the novitiate. Fr Paulose, the Vicar Provincial of the Province of Liguori was also present and exhorted the newly professed to live joyfully in their vocation.