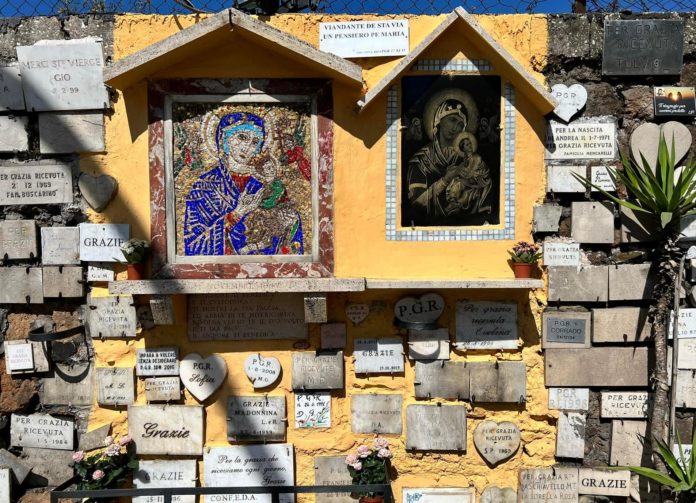 At dawn on 31 May 2022, there was a pleasant surprise for passers-by in Largo Preneste. The mosaic and the image of the Madonna are in splendid shape. Worn down by smog and atmospheric factors, they were in danger of no longer being legible. But the devotees of the area, the Prenestino Committee and the parish priest of San Luca Don Romano De Angelis acted in perfect synergy to save one of the most unusual shrines in the Urbe, frequented by hundreds of people a day, from their cars, during stopovers at traffic lights or fast transit. The young Sicilian restorer Roberto De Miceli was commissioned to work on the two images. The work was masterfully executed, arousing the gratitude and joy of all those involved, so that this delicate operation would go ahead. At the end of the Marian month, the feast of the Visitation of the Blessed Virgin, the Madonna, ‘visited’ by night and by day, returned to her former glory.

The origin of this devotion is linked to two reproductions of the icon of Our Mother of Perpetual Help (a mosaic and a painting), set in a small altar against a boundary wall of the now dilapidated former Snia-Viscosa factory (the factory that produced artificial silk from 1922 to 1954 and, during the Second World War, military uniforms), is unlike any other. An ancient Madonna in such a recent neighbourhood! The wall shrine in Largo Preneste is located in the parish of San Luca Evangelista. It came into being spontaneously, without plans or testing, erected by the piety of the faithful, day after day, and still expanding. The reproductions of the Byzantine Madonna are surrounded by numerous votive offerings for grace received, so much so that they have expanded for a good part of the wall on Via di Portonaccio, and are now also occupying the wall facing Via Prenestina. The oldest of those still preserved is dated 1953. Many have been worn away by time, rain and sun; others still resist. They all have different shapes; some are heart-shaped, others have chains, bracelets, rosaries, crosses hanging from them. And then lots of flowers: always fresh; an older man changes the water to the vases every evening, thanks to the nearby fountain in Via Prenestina.

There are here some beautiful invocations in honour of the Virgin Mary. Like the one that reads: ‘Heavenly Mother Holy Virgin close to Thee my heart sings’, signed L.J.C.; and again: ‘A traveller, recall Mary on you road’, left by Gio, Anna and Rita on 17 November 2011. And yet another: ‘Thank you anyway’. Signed simply E. Each heirloom bears witness to a story,of graces, favours, prodigies, gratitude ,and love. The dialogue between the Mother and her children takes place on the road, a place of passing and stopping. Mary has preceded us in evangelising the peripheries! Indeed, it is she who paves the way for the Church!

But the story of the miraculous Madonna of Largo Preneste, some say, goes back to 1910. In those years, the Redemptorists of Via Merulana continued to spread the devotion, which had a new impetus with the celebration of the fiftieth anniversary of the restoration of the cult in the church of St. Alphonsus (1866-1916). According to the memories of older people, the laying of the first image dates back to 26 November 1917, when, in the middle of the First World War, a bomb was dropped on the Snia-Viscosa factory to sabotage it. To the amazement of those who were expecting disaster, the bomb did not explode, sparing workers and passers-by. Then, a Roman noblewoman, whose identity is unknown, decided to place the image of Our Mother of Perpetual Help on the exact spot where the bomb had been thrown, as a sign of thanksgiving. Since then, the Virgin has continued to dispense graces to the many faithful who have invoked her. Later, not far away, another image appeared, again of the same Madonna. Perhaps to replace the mosaic, worn out by time, or to testify to another grace received. There are no documents stating this, just two nearby images of the same subject, which tell of the love of a suburban neighbourhood for Our Mother of Perpetual Help, whose original icon is venerated in Via Merualana, in the St. Alphonsus Church, the most widespread image of the Mother of God in the world.

A few devotees began to bring flowers and candles and others, perhaps standing still, waiting for the green light to go off, whispered a prayer, which over time became a morning or evening appointment. The devotion intensified during the Second World War, when bombing raged throughout Italy and Rome was also threatened. The inhabitants of the neighbourhood, mindful of the protection they received in the First World War, gathered on the street corner to pray the Rosary, but above all to seek refuge in the uncertainty of the advancing war. The neighbourhood remained unscathed and devotion to the Madonna grew by the day.

Its fortunes did not end with the end of the war. In the scorching Seventies, a time of protest and anticlericalism, someone thought of shooting the Madonna, an episode repeated in various parts of Italy, but the miraculous image was immediately repaired by the inhabitants of Prenestino, who made it one of the symbols of their neighbourhood’s identity. These are the facts of the collective memory, gathered from the living voice of the residents.

Many did not even know what it was called. Some called her Madonna delle Grazie, others Madonna del Divino Amore, many just the miraculous Madonnina of Largo Preneste, others the Madonna of the wayfarers or motorists, or the Virgin of the road, the Hodigitria that points to Jesus as the way, the truth and the life. Everyone, beyond the exact title, would have recognised her, even among a hundred different images. Her features are unmistakable.

Today, a long mural, made up of many tesserae, like a large mosaic, what appears to be a large, open-air roadside shrine, is still a place of refuge and restful pause in the chaos of the hectic day. The Mother of Perpetual Help wants to remain in the midst of her children, to be present in the events of their days. Mary is outgoing: past the door of a church, she remains in the open air, to tell everyone that God can be found everywhere, that he is involved in the lives of the people of our time.

Our Mother, so venerated during the Redemptorist popular missions to the point of being called the missionantess, continues to be a missionary: she preaches silently, and from the icon, she shows Jesus to passers-by. It is impossible not to see her. She imposes herself with her presence, gentle and maternal.