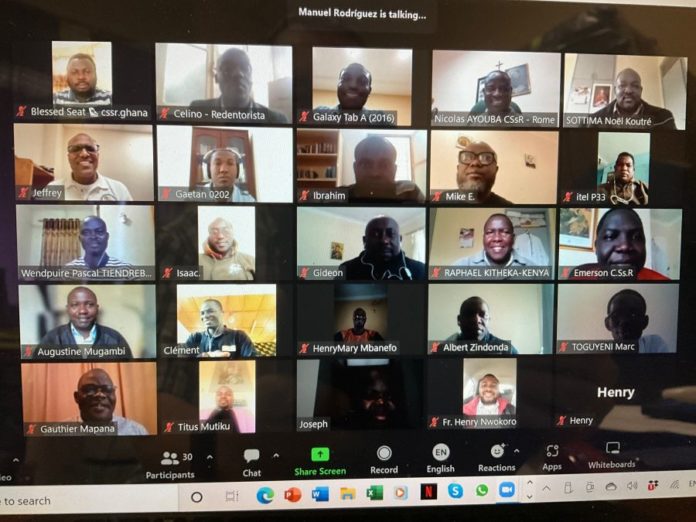 From July 18th to the 22nd, 2022, the Conference of Redemptorists of Africa and Madagascar (COREAM) organized, with the support of the General Secretariat for Formation, a course by Zoom for the formators of the Conference.

An average of 30 confreres participated in the course. Father Noël SOTTIMA, C.Ss.R., the Conference Coordinator, hosted the event.

On the first day, we had two presentations. The first presentation treated the theme of the desirable qualities and preparation of formators for the renewed formation structures, while the second was on the elaboration of Formation Programs. The presenter of both themes was Father Manuel RODRIGUEZ, C.Ss.R., the Executive Secretary for Formation. In his first presentation, Father Manuel explained that we need renewed updating for the formation in our Spirituality and Charism. The close and confident relationship between Jesus and his disciples should be a model for formation. In the second presentation on formation programs, Fr. Manuel emphasized that the programs must take into account the eight stages and the five dimensions of formation while ensuring progression, continuity, objectives, and systematization of the formation content. While the formator is not the owner of the programs, he is co-responsible for their elaboration with the Superiors, the Formation Secretariats, and the Coordinator. As a formator, he must know the background and the families of the formandi.

Father General, Michael BREHL, C.Ss.R., on the second day, offered two presentations. The first presentation reflected the importance of the ministry of formation “in team” and within the formation community. Fr. General stressed the importance of the Ratio Formationis and listed twelve leadership and team ministry steps. Father General´s second presentation considered the use of digital means in formation. While emphasizing their importance, he highlighted the wise and prudent use of communication media and their careful management.

On the third day, the first theme was the Ratio Formationis of COREAM presented by Fr. Joseph MUSENDAMI, C.Ss.R. This approved Ratio Formationis for COREAM is the fruit of eight years of work. The Ratio is divided into four parts: Formation for Mission, the agents of formation, the stages of formation with their five dimensions, and the appointment of formators. It should be noted that this Ratio was approved on April 7th, 2022, and is ad experimentum until 2025. The second formation theme for the day was a reflection on common Formation in COREAM and was offered by Father Nicolas AYOUBA, C.Ss.R., (General Council Consultor). It focused on three points: first, formation in common is for the mission; secondly, he explained COREAM’s plan for common formation for mission; thirdly, he presented the objectives of common Formation in COREAM. During his presentation, particular emphasis was put on cultural immersion and interculturality.

The first presentation on the fourth day was on the use of the science of Psychology (and other behavioural sciences) in formation. It was presented by Brother Jeffrey ROLLE, C.Ss.R. (General Council Consultor). The admission of candidates for formation to the Consecrated Life must follow specific guidelines. Among the aspects that must be taken into account in the formation of candidates are: affective maturity, i.e., the individual´s psychological stability, the ability to form mature relationships, the sense of belonging, the courage to make decisions, self-knowledge, self-confidence, etc. In addition, the psychological assessment should be objective.

On the fifth and final day of our formation course, we had a presentation by Fr Gideon SIDINGA, C.Ss.R., on the protection against sexual abuse of minors and vulnerable adults and how to deal with the processes. During his presentation, Fr. Gideon spoke about the importance of having a code of conduct and a protocol. Regulations are also indispensable. The content of these documents must be within reach of all, the formators and formandi.

The course ended with an extended session to answer questions, recognize acknowledgements, and closing remarks.