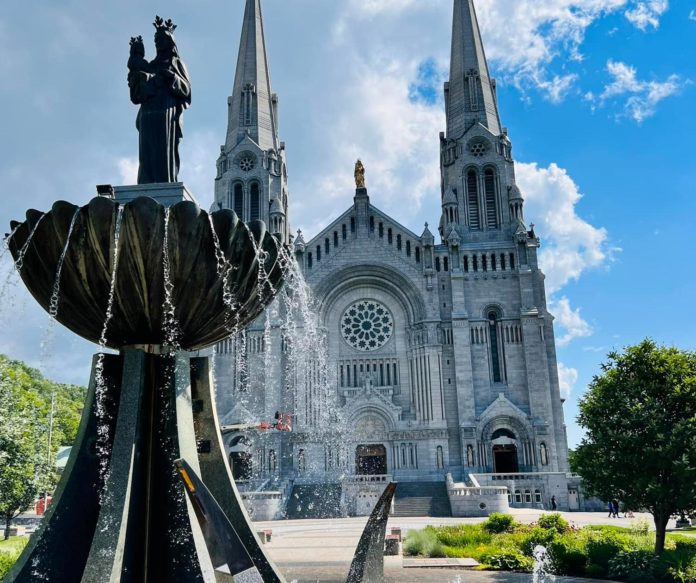 “For over 140 years, the Canadian Redemptorists had been ministering to the pilgrims and visitors at the Basilica of St. Anne in Ste. Anne-de-Beaupre, QC. Every year, countless people come to the Shrine asking her to interceed for them. The Novena to Saint Anne will take place at the Shrine from July 17 to July 25, 2022 in preparation for her Feast, which in the Byzantine calendar is celebrated on July 25, and in the Roman calendar on July 26. Join us in prayer for the needs of your family and the needs of the world. If you are unable to make a visit, please unite yourself spiritually by praying this beautiful troparion for the next nine days:

“O Holy Anne, you are filled with the wisdom of God and you gave birth to the most pure Mother, the one who gave birth to Life. Therefore, you have been carried in glory on this day to the blessedness of heaven, to the abode of those who exult with joy. And now you pray, O ever-blessed one, for all those who honor you with all their hearts.”
(Redemptorists of the Yorkton Region, Province of Canada)

How strong is Marian devotion, or devotion to the mother of the Virgin Mary, among the native people of Canada?

About 1/3 of the Indigenous People in Canada are Roman Catholic. To understand their devotion to St. Ann, you need to understand the overall structure of the social life of the indigenous people. They have a strong respect for the grandmothers in their society. Grandmothers are seen as the special teachers, as people of wisdom who help firmly ground the next generation in how to live a good life. To be a grandmother in this society is a great honor. Therefore, Saint Ann, being the grandmother of Jesus, is considered an extremely sacred and special person in their lives. She is the one who will teach them the faith and will guide them into proper action as believers. She will listen to their prayers and comfort them in their problems and help their relationship with the Lord. Each year the indigenous people gather and camp near the Shrine. It is a time for prayer, rest and healing.

How do simple people prepare to celebrate the feast of Santa Ana together with the Holy Father?

Story telling is a major value and way of life for the Indigenous People. It is important for them to be able to celebrate and tell their story of themselves as a people. Unfortunately part of their story telling will include the painful treatment they received when being forced to suppress their cultural heritage. They want to share these stories with the Pope as part of the healing process. They will also want to share their beloved culture with the Pope through their ceremonies, dance and songs.

Have the Redemptorists contributed to keeping this Catholic devotion alive?

The Shrine of Ste Anne is a place of pilgrimage and healing. Among the events each year at the Shrine is a special Liturgy in June called First Nations Sunday. Throngs of Indigenous people, many in ceremonial attire, gather for this Mass.  The other major event is the nine day Novena to Ste Anne in French and English. During this Novena and over the summer over one million people will visit the Shrine.The primary ministry of the Redemptorists at the Shrine is hospitality. Welcoming people to rest from their daily hectic lives and place their prayers and petitions to the Lord through the intercession of Ste Anne. It is a Shrine of Masses, public and private devotions, the Sacrament of Reconciliation and includes a special individual or family Blessing Booth where everyone is welcome throughout the day. Redemptorists minister here primarily in French, English and Spanish.

During his visit to Canada, the Holy Father celebrates Mass at the National Shrine of Sainte Anne de Beaupré on Thursday 28 July 2022.

Led by the Redemptorists, the Basilica of Sainte-Anne-de-Beaupré is a Catholic church located not far from the city of Quebec.It is an important pilgrimage site, the main gathering takes place on July 26, during the feast of St. Anne, the civil and ecclesiastical patroness of Quebec. The feast is preceded by the novena in which many faithful participate.

Historical note:
The first church was built in 1658. After 200 years, it was replaced by a new and more spacious church erected in 1872. The construction work will be carried out by the entrepreneur Pampalon de Lévis, father of the venerable Alfred Pampalon, one of the first Canadian Redemptorists.In 1877, Cardinal Elzéar-Alexandre Taschereau ordered the Redemptorists of Baltimore, and then those of Belgium, to occupy the sanctuary, which became popular thanks to the arrival of the railway in 1881.This church was officially consecrated in 1878 and received the title of minor basilica from Pope Leo XIII in 1886.In 1891 the Redemptorists erected a new monastery and a Scala Santa, a replica of the Holy Staircase preserved in Rome. Furthermore, in 1896, the Saint-Alphonse seminary opened its doors.The basilica, enlarged and completed under the direction of Father Servais Paquay, a Redemptorist, will be destroyed by fire on March 29, 1922. The colossal wooden statue of Saint Anne sitting on top of the facade will be preserved from the fire. The work of Matthias Zens, a Belgian sculptor, will be reinstalled in a similar location on the new building.The construction of the current basilica began in 1923 under the initial impulse of the architect Maxime Roisin of Paris who proposed a neo-Romanesque monument with Gothic proportions.It will finally be officially consecrated in 1976 by Cardinal Maurice Roy.