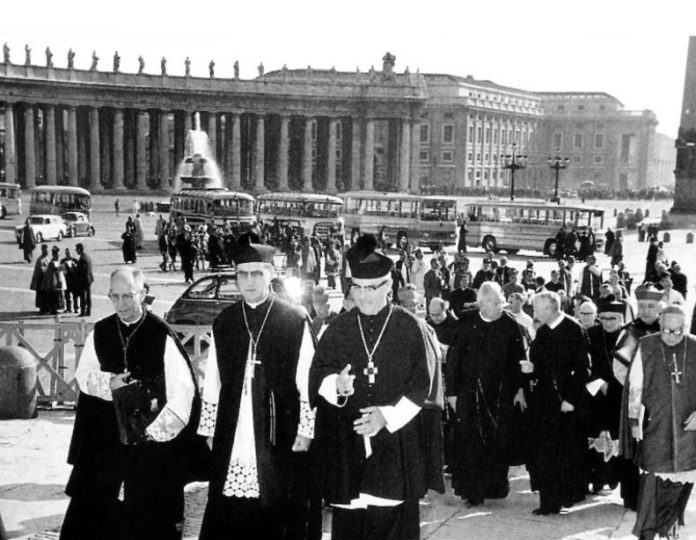 On Tuesday 11 October, at 5 pm, in memory of St. John XXIII, Pope, the Holy Father Francis presided, in St. Peter’s Basilica, the Eucharistic celebration on the occasion of the 60th anniversary of the beginning of the Second Vatican Ecumenical Council.

For this occasion, Scala News proposes some reflections collected from the book “Bernhard Häring: a happy Redemptorist” edited by Martin McKeever, contributions by Raphael Gallagher, Bruno Hidber, Augustin Schmied, Erwin Teufel and a Bibliography chosen by Adam Owczarski. Editiones Academiae Alfonsianae 2008. Work published on the 10th anniversary of the death of Bernarhd Häring.

On the 25 January 1959 Pope John XXIII let it be known that he intended to convoke a Council. Fr. Häring was from the beginning enthusiastic about this idea and in the following years the Council became the centre of his work and activity. As early as 1959 he belonged to the central commission responsible for preparing Council texts. He was not at home in this commission which was dominated by a theology that he wanted to leave behind. So he was not unhappy when their suggestions were rejected by the Council. During the whole period of the Council Häring was a “peritus”, that is an expert, in various commissions and sub-commissions. He was constantly giving lectures to conferences of bishops. He untiringly tried to communicate the key questions and the major concerns of the Council through publications and lectures, as well as through interviews in the press, on the radio and on television. At this time he became a kind of ecclesial media star.

There is no doubt that Fr. Häring influenced the course of the Council in different ways and in a significant manner.

In the Decree on the Education of Priests Optatam totius he co-edited the section in which it is said that moral theology should be nurtured by its closeness to Scripture.

Gaudium et spes insisted a great deal on the “joy and sorrow, sadness and fear” of that time and brought out the challenges to the Church. In this way it impressed many people as a liberating and encouraging message.
During the decisive phases of the preparation of this document, Häring was Secretary of the Commission which was responsible for bringing together the various suggestions and producing a unified text. He influenced most of all the sections on marriage and family, culture and politics, peace and justice. The expression “signs of the times”, which runs like a red thread through the entire document, was suggested by Häring and thanks to the support of Pope Paul VI was taken up as a key concept in the document. Equally it is thanks to Häring’s initiative that in the production of Gaudium et spes women were for the first time involved in the production of a Council document. (B. HÄRING, Meine Erfahrung mit der Kirche, Herder, Freiburg i. Br. 1989, 74-83.)

Named as a consultor and later as a peritus by John 23rd, confirmed in his role as peritus by Paul 6th, Häring is symbolic of the tension inherent in the Council event. The tension was between aggiornamento and the defence of the faith or, more concretely, between pastoral and doctrinal theology. The contribution of Häring, at various levels, was to think first in terms of pastoral issues. In this, he shows himself to be a genuine Redemptorist.

… the story of the redaction of texts remains a valid hermeneutical criterion to evaluate the role of Fr. Häring at the Council, for the following reason. Among the issues to be resolved in this period of the reception of the conciliar teaching is a greater clarity on the meaning of the term ‘pastoral’. This term was not clear to the Council Fathers themselves, as is obvious from the first footnote to Gaudium et spes. Yet, this conciliar constitution was promulgated as a pastoral one. Fr. Häring saw his role as a reminder of the pastoral exigencies of the Church in new times, and I suggest this is what most characterises his role.

In his own religious order, Häring also found the highest degree of recognition that a Redemptorist theologian can receive.
“The General Chapter recognizes with gratitude and satisfaction, the academic and pastoral contributions that Father Bernhard Häring has rendered and continues to render in the field of Moral Theology. Remaining faithful, in a creative ecumenical way, to the valid traditions of the christian communities, and following, as well, the intuitions of Saint Alphonsus, Father Bernhard Häring has worked intensely, courageously and effectively to reformulate the message of Christian morality for the world of today” (22° General Chapter (West End, USA) 1997, Botschaft, Orientierungen, Postulate, Roma 1998, 20-21)