The new Redemptorist Superior General, Fr. Rogério Gomes, C.Ss.R., sent a letter to the Union of Redemptorists of Brazil this Wednesday (12/10), Patroness Day of Brazil. In the document, he highlights the complex and challenging times in which we live and asks for courage from the brothers.

In Brazil, on October 2, the first turn of the general elections was held to choose the President of the Republic, to renew the House and Senate, and to elect state governors, and the election campaign is characterised by deep polarisation.

Fr. Rogério Gomes affirms that the political situation in the country cannot be indifferent to missionaries.

“We are experiencing a phenomenon to which we must be very attentive: the erosion of democracy, the use of religion to manipulate reality and to impose fear and exclusion on the poor. This reality should make us think. We must be wise as children of light,’ says one of the excerpts from the letter.

Another point highlighted by Fr Rogério Gomes is the negative phenomenon of fake news:

“The spread of fake news can be related to the sin against the eighth commandment: ‘Thou shalt not bear false witness!’ It is an enormous disservice to the truth.”

Another commandment mentioned by the Redemptorist in the letter is the second: “Do not take his holy name in vain!”. According to the Superior General, this commandment has never been so profaned, with the use of religion done perversely, in the form of violation of intimacy, coercion and fear.

“How can we believe in the true God and defend weapons, persecute traditional religions, destroy Mother Nature, and not invest in public health, education, science and social policies for the benefit of the poorest and the country’s development? How can we believe in the motto ‘the truth that sets us free’ (Jn 8:32)? However, we live with the flood of lies that deceive people and create reality.

How is it possible to speak out against abortion yet advocate the death of blacks, indigenous people, homosexuals, and women, the death penalty, cover up domestic violence, reaffirm machismo, promote prejudice against northerners and minorities, and cause social mistreatment? The teaching of the Church is evident in affirming the inviolability and dignity of life from conception to natural death (cf. JOHN PAUL II. Evangelium vitae, no. 2)’.”

Before concluding, Fr Rogério Gomes affirms that the political situation in Brazil cannot be indifferent to the Redemptorist Missionaries and asks for the intercession of Nossa Senhora Aparecida for the protection of our country from violence and evil, awakening leaders who listen and work on behalf of the poorest. 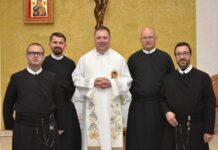 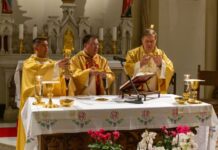 Recalling the face of the Redeemer