Fr. Vincenzo La Mendola CSsR writes about the interesting contribution to the Redemptorist history and spirituality that is to find in Fr. Rocco Rizzo’s book dedicated to the Discalced Carmelite nuns monastery in Ripacandida, located in the Basilicata region in southern Italy.

Although nine years have passed since the publication of the volume by Fr. Rocco Rizzo, Conventual friar and Rector of the College of Penitentiaries of St. Peter’s Basilica in the Vatican, it is worth making known to those interested in Alphonsian, Gerardine and Redemptorist spirituality, in the broadest sense, a work that certainly makes a notable and original contribution.

P. Rocco, a native of Ripacandida, a researcher and scholar of local history, especially religious history, offers readers the fruit of his bibliographical research and systematic study of historical sources relating to the local monastery of St. Joseph, giving rise to the first historical publication on the subject, hitherto mentioned in local historiography, without the support of all the sources, sifted and questioned with an appropriate historical methodology.

Inhabited for almost two hundred years by the Discalced Carmelite nuns and sanctified by the mystical experience of Sister Maria di Gesù [born Felicia Araneo] of the Holy Trinity (1723-1803), prioress of the community several times, a leading figure in the religious history of women in Basilicata in the Age of Enlightenment, and pointed out by the first biographer of St. Alphonsus (Fr. Antonio Maria Tannoia) as the one who made the spirit of St. Teresa flourish again in Ripacandida, the Ripacandidese monastery represents one of the most significant stages in the spread of the Teresian reform in southern Italy.

An experienced author of esteemed historical monographs, the author inscribes the events of his biography in the religious history of Basilicata, dwelling on a segment of the religious history of the diocese of Melfi-Rapolla in the 18th century and more analytically on the experience of the Ripacandida community, characterised by the volcanic pastoral activity of archpriest Father Giambattista Rossi (1690-1766), founder of the monastery and continuer of the pastoral work of his brother Father Giovanni (1679-1751), whose biographer he was also. Let us recall that Giambattista Rossi’s existential parable was the subject of another substantial publication by Fr. Rizzo, Il Parroco santo di Ripacandida, printed by the Vatican Publishing House in 2016.

The narration, documented and enriched by frequent appropriate infra-textual quotations, focuses on the human and spiritual journey of the Lucan mystic, leaving the path of the monastic community, of which she was a member, in the background, in the initial phase of its establishment and in the difficult search for internal stability.

With the sources at his disposal, identified with patient investigation and analysed with insight, Fr. Rocco reconstructs the family context, the childhood and early youth of Felicia Araneo, to move on to the events that preceded the foundation of the monastery, first a retreat for spinsters or a conservatory and then a monastery with papal enclosure, canonically aggregated to the Order of Discalced Carmelites. And it is precisely in the reconstruction of the individual stages that marked the evolution of the religious foundation that Carmelite’s biography merges with the events of her monastery and with those of the personalities who had institutional relations with it in various capacities.

Fascinated by the spirituality of Teresa of Avila, the Founder trained some girls in the spiritual life in view of the realisation of the work, to which the successive bishops in the diocese of Melfi, the duke of Ripacandida don Tommaso Mazzaccara, and the Poor Clare Sister Maria Battista de Vito, from the Melfi Monastery of St. Bartholomew, the first governess, superior and novice mistress, would contribute in their own way. The mention of these and other ‘minor characters’ hints at the relations between the various local institutions, involved in different ways, in the foundation of a monastery, which was to be a point of reference for the monkhood of the daughters of the local nobility and bourgeoisie and a place to educate young educated girls, in the absence of female scholastic structures.

The Conservatory, inaugurated on 15 October 1735, took its first steps untangling itself from the problems related to the structure, which was being transformed from an inhabited house into a monastery, and the inevitable difficulties related to its canonical configuration, not without delays and bureaucratic snags.

The description of the formation process of Sr. Maria di Gesù opens a window on the regular life of the first Carmelite community, marked by austerity and fervour, fostered by the Founder’s lively preaching and the periodic intervention of specially intercepted religious. In 1737, after repeated requests, the Decree of perpetual enclosure was issued, which would have given the institution the status of a monastery of contemplative life, if the episcopal authority had not put obstacles in its way, delaying its effective application due to the failure to build the garden, which had been imposed as a conditio sine qua non. Once the exequatur was obtained, and the required clauses fulfilled, the Papal Decree did not come into force until 1747. The following year, Sr Maria di Gesù was elected prioress for the first time, finding herself grappling with the governance of a young community, at the height of its initial momentum and constantly growing in numbers.

Between 1749 and 1750, Saint Alphonsus Maria de Liguori arrived in the diocese of Melfi with a band of missionaries, among whom was the venerable Fr. Paolo Cafaro (1707-1753), spiritual director of Alphonsus himself and later of Saint Gerard. During the mission at Ripacandida, the founder of the Redemptorists preached spiritual exercises to the Discalced Carmelite nuns, edified by their austere life and strict observance of the primitive Rule. The saint’s effective preaching was sealed by a prodigy that took place before the eyes of the community: the crucifix, placed next to the missionary during a sermon on the novissimos, took on human form, dripping with living blood.

It was the beginning of a close relationship of trust and spiritual accompaniment, which took the form of a meaningful, if brief, correspondence. St Alphonsus, author of The True Bride of Jesus Christ, extremely demanding in matters of religious life and critical of that of many women’s monasteries of his time, declared with evident astonishment: I would never have believed I would find such a beautiful bouquet of flowers on this rock! If circumstances and his precarious state of health kept Alphonsus from returning to Ripacandida, they could not prevent him from sending to the young community one of his best congregants Fr Carmine Fiocchi (1721-1796), who was to become the spiritual counsellor of the Lucanian mystic and the intelligent mediator between the community and the ecclesiastical superiors in moments of tension.

The presence of St Gerard Maiella in Ripacandida, since 1751, fits into these circumstances. The nuns’ parlor, now the town hall, the church of San Giuseppe and ‘the wheel’ became the symbolic places of his passage, witnesses to his ecstasies, nocturnal apparitions and his fervour, infected to the nuns with fiery spiritual discourses. The friendship, born within those walls and sealed by a pact of mutual prayer, is witnessed in the letters that have come down, a third of the Gerardine epistolary – the author points out – authentic pages of lived spirituality, in that strip of land at the extreme edge of the Kingdom.

With pertinent arguments and expositional clarity, Fr. Rizzo tackles one of the most painful pages in the history of the monastery: the crisis due to the attempt to mitigate the Rule, desired by the Discalced Carmelites of Naples and not accepted by the community, unanimously resolved to remain faithful to the strictly professed observance. Emblematic, in this troubled segment of the religious institution’s history, is the intervention of St. Alphonsus in support of sister Maria di Gesù, who was even accused of demonic suggestions, and the work of wise mediation carried out by Fr. Fiocchi, a skilled diplomat.

In Chapter XI, the author deals with the delicate subject of the ‘mystical phenomena’ that affected the life of Sister Mary of Jesus, considered authentic by Saint Alphonsus himself, who had no doubts as to the soundness and seriousness of the Carmelite’s spiritual life. On the other hand, she was guided by Fr Fiocchi on the ordinary path to holiness. Wary of mystical phenomena, a common tendency throughout the 18th century, Fiocchi repeatedly showed her the simple way of virtue. Although she obeyed with trust and walked the ordinary and common ways of the spiritual life, Sr. Maria was not exempt from the hard trial of spiritual dryness, in which she was deprived of all spiritual sensibility and experienced the dark night, the sense of failure and the silence of God, a time of inner growth, in which she had the support and friendship of Gerard Maiella, who was also traversed by the purifications of the mystics. It would be repetitive to recall the ‘ministry of consolation’ exercised by the Lucanian saint towards the one he considered a spiritual mother or sister, a sign of his humanity and spiritual harmony that bound the two souls together.

The letters addressed by Saint Alphonsus to Sister Mary of Jesus during this painful phase of her journey are an authentic testimony to the Saint’s sound spiritual doctrine and a clear indication of his method of spiritual direction.

The last chapters of the volume recount the death of Sister Mary of Jesus and pause to describe the pillars of her spirituality. This is followed by some significant testimonies on the fama sanctitatis of the ‘holy prioress’ and the chronicle of the two recognitions of her body. The Chronology of the life of Sister Mary of Jesus concludes the treatment, providing an overview.

The last section of the book contains an interesting photo album, in which a significant repertoire of images has been collected, further historical sources that complete the narrative, introducing the reader ‘visually’ to the places mentioned and allowing him to make a sort of virtual visit.

We are grateful to Fr. Rocco Rizzo for his work, which has all the hallmarks of a historical essay, as shown by the numerous footnotes and the bibliography of references punctually referred to in them.

Conceived and produced primarily for popularisation, the text is fluent, not least because of the choice of a narrative style and language that makes a topic that might seem intended for ‘insiders’ understandable and interesting.

Undoubtedly, the book represents a point of arrival in local historiography and lays the foundations for subsequent collateral research, contributing significantly to the knowledge of the life of Sister Maria di Gesù, to the understanding of her spiritual message, and to the history of consecrated life in Lucania in the 18th century. Its publication and diffusion is undoubtedly one of the necessary and required prerequisites for the start of the canonical process that we hope will lead to the introduction of the Cause of Beatification, so much desired by the Ripacandida community.

The original article is in Italian. 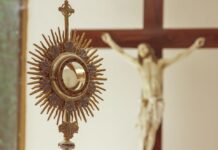 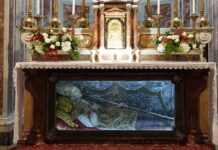