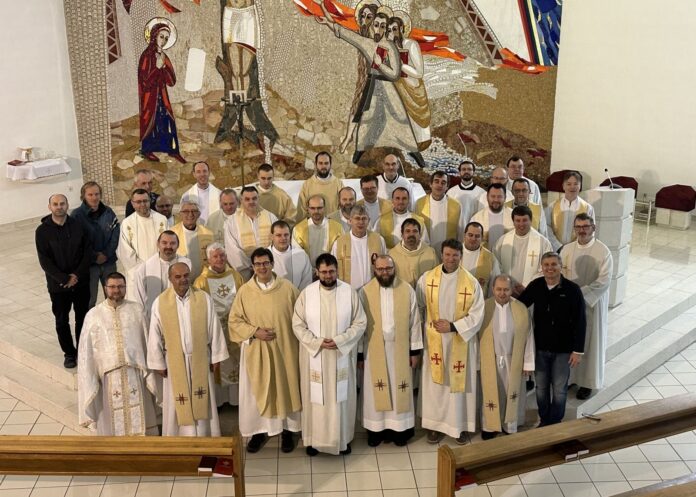 The Third Ordinary Provincial Chapter of the Congregation of the Most Holy Redeemer of the Province of Bratislava – Prague elected a new leadership on January 11, 2022. Fr. Jozef Mihok CSsR will be the Provincial Superior for the next four years.

Fr. František Boldy was elected as the new Vicar Provincial of the Order. After yesterday’s election, both were officially confirmed in this position today by the Superior General, Fr. Roger Gomes CSsR. The Chapter also elected the members of the Ordinary and Extraordinary Council: Fr. Francis Boldy CSsR and Fr. Václav Hypius CSsR are ordinary consultors, and Fr. Martin Macko CSsR and Fr. Tomáš Regeš CSsR are members of the Extraordinary Council.

The Provincial Chapter of the Redemptorists of the Province of Bratislava – Prague is attended by 41 members from 10 communities in Slovakia, the Czech Republic and Lithuania, the Vice-Provincial of the Vice-Province of Michalovce, as well as representatives of the laity associated with the missionary activity of the Order.

Fr. Jozef Mihok CSsR was born on January 5, 1987 in Prešov, Slovakia. After graduating from high school in Sabinov, he entered the Congregation of the Most Holy Redeemer in 2005, where he professed his religious vows for life in 2011. From 2005 to 2012 he studied at the Faculty of Theology of the University of Trnava (Aloisiana). He was ordained a priest on June 22, 2013, in Prešov. Since 2013 he has been a member of the Redemptorist community in Banská Bystrica – Radvan; since July 2019 he has been the administrator of the parish of Banská Bystrica – Radvan. From 2016 to 2019 he served as an external formator in the International Novitiate Lubaszów – Podolínec, and since 2015 as an external formator of the formation community in Bratislava. In January 2019, he was elected an extraordinary member of the Council of the Province of Bratislava – Prague. On Ash Wednesday in 2016, he received the mandate of Missionary of Mercy from Pope Francis.

The III Ordinary Provincial Chapter of the Province of Bratislava – Prague of the Congregation of the Most Holy Redeemer – Redemptorists began on January 9, 2023, at the Xaver House in Badin. The Chapter is a gathering of all members with life vows and delegates for the formation community, as well as lay people associated with the missionary activity of the Order. In addition to the election of the new leadership, the agenda included the evaluation reports of the Provincial Superior of the Province of Bratislava – Prague, the Superior of the Vice-Province of Michalovce, the heads of the various secretariats and commissions, the director of the publishing house Word Among Us, the rectors of the houses, the prefect of the students and the representative of the students for the last four years.