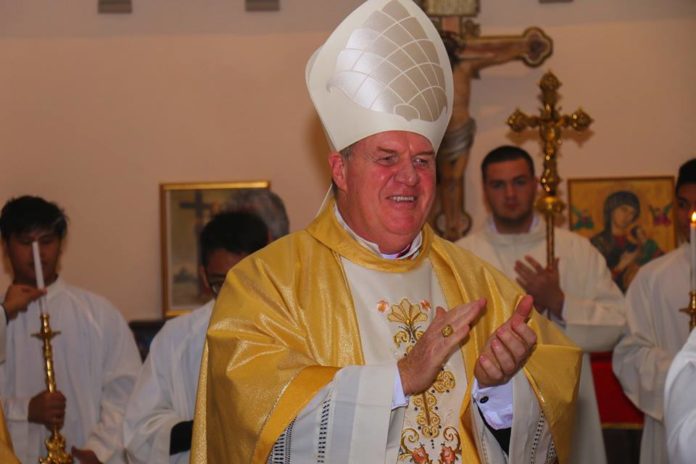 He rejects the “Prince of the Church” “nickname”. He suggests we wait and carefully observe the “concrete decisions” the new US President is going to take, steering clear of “blind” rivalry or blessings. He mentioned his grandmother, an Irish immigrant to the US who would pray exclusively in Irish “because she wasn’t sure God understood English”. The newly-elected cardinal Joseph William Tobin, who recently moved from the Archbishop’s see in Indianapolis to the one in Newark, talks about the fact that his new archdiocese celebrates Sunday mass in 22 languages. In his new mission he pledges trust in the missionary vocation of the Redemptorist Fathers, the religious congregation he belongs to: “It is going to be an extraordinary experience of the challenge we have before us across the world: announcing the good news to the poor, respecting the beauty of different cultures, learning to be evangelised by those whom we serve and finally, helping people to grow in their love for Jesus Christ, the only Redeemer.”

The interview took place in Via Merulana, in the Roman offices of Scala News with Carlos Espinoza.

Archbishop Tobin, you are now a prince of the Church too… Is the Church still in need of princes?

“I am not a “prince” of the Church, I don’t accept that sort of ‘nickname’… I don’t believe the Church needs princes. I do believe though the Church needs missionaries. And that’s how I understand myself. This invitation of the Holy Father to serve in the College of Cardinals is a different way of being a missionary”.

In the past, you talked about the danger of polarisation in the US Church, of it being split into ideological blocks, aptly referring to this process as “balkanisation”. Where does this phenomenon stem from?

“Well I think the Holy Father spoke of this without using the word ‘balkanisation’. I used that word a couple of years ago, in a talk I gave in the College Theology Society in the United States, in May of 2014. What the word means is a fragmentation, a fragmentation along ideological lines. And that fragmentation is reinforced by people who don’t speak longer with each other or they speak only with those who agree with them. So I think that there certainly is a danger in the United States because this balkanisation or fragmentation already exists strongly in American society. All you have to do is study the last election and the campaign that led up to it. It’s very sad when these sort of tendencies pass uncritically into the Catholic Church.”

Isn’t there a risk, in the US too, of this “balkanisation” focusing on the figure of the Pope, dividing the Church into fans or opponents of Francis?

“Of course, there are people who see the Pope himself as a contradiction. I would say the Pope unites the expectations of many around the world. There is no doubt about that whatsoever. And I am sure that those who don’t always agree with him are a minority. A loud minority but a minority nevertheless.”

What impact could the new political path traced by Donald Trump’s election as president of the United States have on this “balkanised” scenario?

“Well certainly the message of the president-elect was not a message to unite Americans. It was to divide them. And I think in some ways he’s been very successful in doing that. Of course the divisions didn’t begin with President Trump. There had been there for a while. I had lived 20 years outside the United States and I think one of the most surprising features when I returned was to witness this sort of division.

The media set Trump and Francis against each other on the immigration issue. You have substantial experience in this area.

Well I think the first experience I have with immigrants is I’m the grandson of immigrants. My grandmother came from Ireland and she spoke English well but she always prayer in Irish because she wasn’t sure God understood English. I then was privileged to serve communities of immigrants as a young priest. Principally Hispanic but also Arabic immigrants, people from Jordan and Syria and most recently as the Archbishop of Indianapolis, I had a disagreement with the Governor of the State regarding the admission and resettlement of Syrian refugees so I think there is a contrast between the position of the new administration in the United States and certainly the Catholic Church and the United States Conference of Catholic Bishops.

Some representatives of the US Church try to give Trump credit, thinking that he will bring about warmly-welcomed changes to pro-life issues. Then there are others who say the Church must unreservedly oppose the president-elect. What do you believe is the best course of action?

“St. Paul orders us to pray for those who govern. And this is always the starting point. I don’t think President Trump’s plan is very clear yet. What he said as a presidential candidate was a little confused, also with regard to the defence of life issue. Let’s wait and see. I think that we, as US bishops, will have to pay particular attention to the concrete decisions that are going to be made, steering clear of a priori rivalries or blessings. Let’s wait and see and deal with the concrete things.”

What do you believe St. Alphonsus would say, as a Redemptorist, about the critical reactions to the Apostolic Exhortation “Amoris Laetitia”?

“Well I think St. Alphonsus would ask us first to study, study the text because he once said a problem in the Church is when the confessors do not study and when the professors don’t hear confessions. I think secondly it’s very important to remember that “Amoris Laetitia” is the product of two Synods. It’s not simply that the Holy Father sat down at his desk and began writing. He was present at two Synods and used that reflection, which, we believe was guided by the Holy Spirit, to produce the document. Thirdly, I think that the Holy Father is not simply proposing very concrete answers to questions, as much as some people would like that. Instead, he’s proposing a process of moral reflection, that is not simply a ‘yes’ or ‘no’ answer, but rather: How do we discern the will of God? How do we form our consciences? How do we deal with people that cannot always live to the letter of the law? Now I think St. Alphonsus would be familiar with this because this was a question in his time and he used all of his intelligence not simply to repeat the norms but to apply them pastorally and compassionately to weak human beings.” 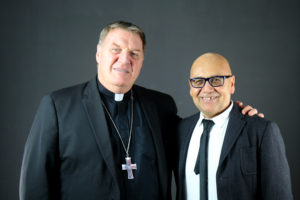 Greek bishop Fragkiskos Papamanolis wrote a letter to the four cardinals who published their ‘dubia’ on the “Amoris Laetitia”, urging them to apologise for spreading scandal among the People of God.

“I haven’t read the letter yet but I heard about it and it did tickle my interest… I think the Pope is fostering the birth of a renewed sense of synodality, so that, in their national and local bodies, bishops can take the great questions – including doctrinal and moral questions – as food for reflection, prayer and discussion instead of each person pursuing his own objectives.”

In your experience as pastor, can you give a concrete illustration of the effect papal preaching had during the Year of Mercy on the ordinary lives of Christian communities familiar to you personally?

“Well I think that the experience of my archdiocese was very good. They welcomed the Year of Mercy, we had a number of different celebrations and activities, a number of I suppose new projects that came out of the Year of Mercy, but for me, one of the most memorable experiences was speaking about mercy in the prisons. I frequently go to the prisons in my archdiocese and it was my experience that the prisoners understand mercy because they have no reason to brag before God. All they can ask from God is mercy and the Holy Father helped them understand that God is merciful. And I think this gave them great confidence and strengthened their faith during this year. So, because I go frequently to the prisons, I could see the change in the prisoners over the course of this year.”  (Gianni Valente, Vatican Insider/ Carlos Espinoza, Scala News)

You can see the Interview: