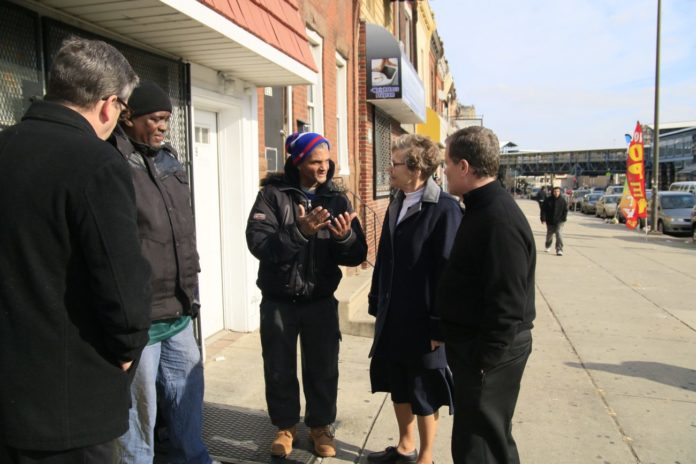 Residents of the Kensington section of Philadelphia talk with priests and a religious sister ministering at Mother of Mercy House, a Catholic outreach project in a neighborhood with many poor people including immigrants. (Sarah Webb)

When a child is baptized in the Catholic Church, one expects the parents will choose practicing Catholic godparents. At Visitation B.V.M. Parish in the Kensington section of Philadelphia, Redemptorist Father John Olenick has noticed a new priority.

“I have had parents asking for godparents who are American citizens so that if they get deported the children can stay with them,” he said. “There is a lot of anxiety.”

“We have some among our lectors, our eucharistic ministers and on our parish council,” Father Olenick said. “Their kids are in our school.”

U.S. Immigration and Customs Enforcement (ICE) has been active in the area and several people have been picked up, according to Father Olenick.

“Very recently they tried to arrest a Mexican man. The only reason he wasn’t picked up is because the neighbors came out and told them they had the wrong man and they started to film it. They had a name but it wasn’t him,” Father Olenick said.