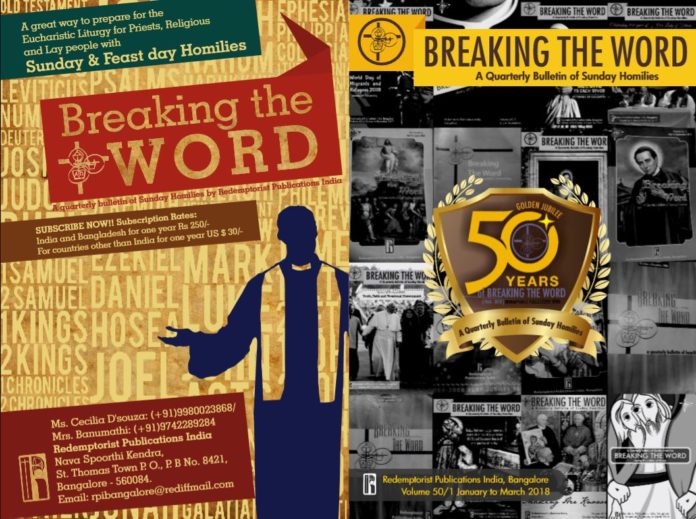 (Bengaluru, India) “Breaking the Word” is at the very heart of who we are as Redemptorists, who are called to “follow the example of Jesus Christ, the Redeemer, by Preaching the Word of God to the poor, as he declared of himself: ‘He sent me to preach the good news to the poor (Lk 4:18)'” (Redemptorist Constitution No.1).  Effective Preaching involves effective Breaking of God’s Word to the people of God.  Preaching the Word of God to the most abandoned poor was very central to the life of St. Alphonsus.  He was known as a tireless preacher of the Word of God.  He devoted more than thirty years of his life towards Preaching the Word of God to the simple rural folk, retreats for priests, seminarians and sisters.  He preached more than one hundred and fifty parochial or popular missions (Parochial Missions during the time of St. Alphonsus would last anywhere from two to four weeks).  His preaching was thoroughly persuasive, utterly convincing, born from his own conviction. His style was always simple that he derided elegant jargon and fuzzy abstractions.  He insisted on the removal of all fancy words from sermons and called for the use of everyday, normal language.  He said of himself, “I may have to account to God for every other sort of sin, but not for improper preaching.  For I have always preached in a way that everyone could understand me.”  To make sure he would be understood by his listeners, Alphonsus made frequent use of simple, familiar metaphors.  He proved in fact to be a master of the apt image and illustration.  The goal of his preaching was always to draw the listener to an experience of conversion and a deeper love and union with the Redeemer.

The Redemptorists carrying on the legacy of their founder St. Alphonsus, have through the centuries proclaimed the Word with simplicity and renewed enthusiasm.  A Redemptorist in his priesthood is a servant of the Word and serves the community as he Breaks that Word for his people.  It is worth quoting Constitution 6, “All Redemptorists, ever following the Magisterium of the Church, must be humble and courageous servants among people of the Gospel of Christ, the Redeemer and Lord, who is the head and a model of the new humanity.  This message has for it’s special object plentiful redemption; it proclaims the love of God the Father ‘who first loved us and sent his Son to be the expiation for our sins’ (1 Jn 4:10) and through the Holy Spirit gives life to all who believe in him.” 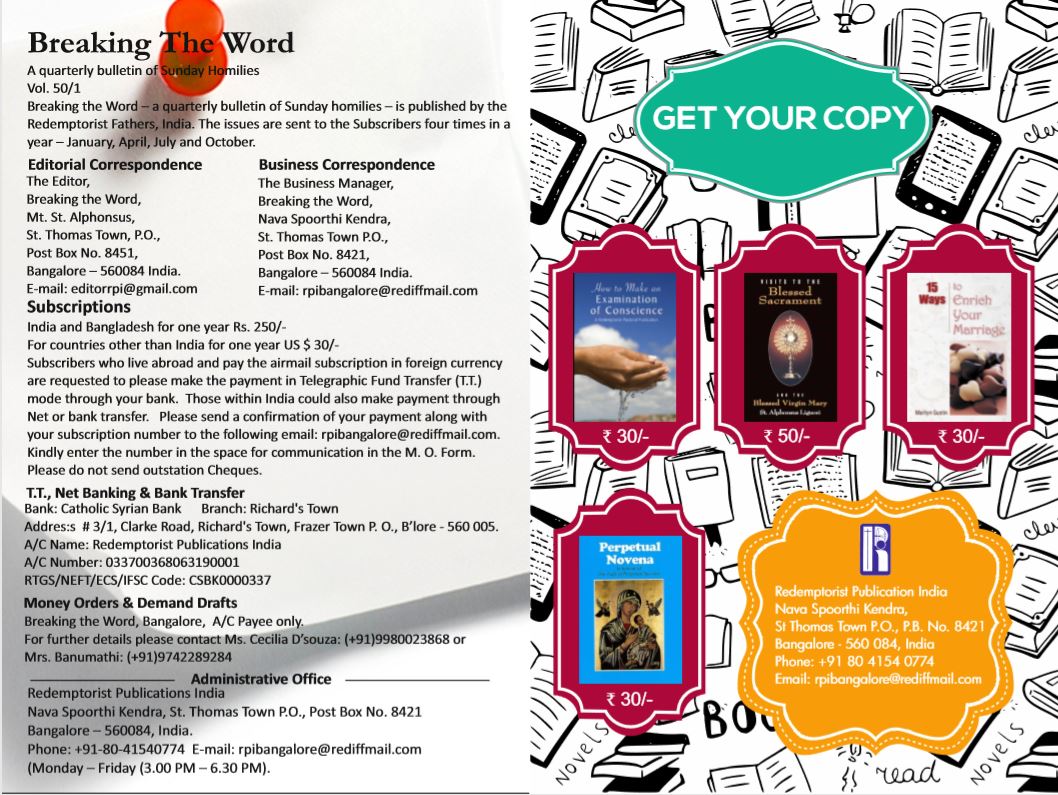 Effective preaching of God’s Word with simplicity and renewed enthusiasm should not be the charism of the Redemptorists alone, but of every priest. The second Vatican and post Council documents emphasise on the priest’s mission as beginning with the preaching of God’s Word. It is with this intention soon after the second Vatican Council in order to help priests to effectively prepare and preach the Word of God to the faithful, in the year 1968 Fr. Gino Henriques began “Breaking the Word” as a bulletin of Sunday Homilies.  Back then which was 50 years ago, Fr. Gino found priests in the villages who did not have the time to prepare their homilies as they took care of 30-40 parishes and sub-stations.  It was around the same time that some of his priest friends from Mumbai sent in requests to help them prepare a good homily as they had to preach in the local languages, this then became the context for the genesis of “Breaking the Word” as a bulletin of Sunday Homilies.

St. Alphonsus was not only a powerful preacher of God’s Word, but was also a prolific writer, who wrote more than 112 books some of which went into so many editions during his own lifetime.  Being true to this great legacy of St. Alphonsus, many Redemptorists over the last fifty years have contributed tremendously towards “Breaking the Word” by writing homilies that were born from their rich pastoral experiences.  On the occasion of the golden jubilee of “Breaking the Word” and “Redemptorist Publications India” I express my heartfelt gratitude to my confreres for their constant support in making “Breaking the Word” a popular quarterly bulletin of Sunday homilies not only in India but abroad as well.  Many thanks to the many editors of “Breaking the Word” and directors of “Redemptorist Publications India” who over the last 50 years, have worked tirelessly along with our dedicated staff, Ms. Cecilia D’Souza and Mrs. Banumathi, to enable “Breaking the Word” witness this great moment in history.  Last but not the least a special thanks to all our subscribers who over the years have been our constant support and encouragement, you have enabled “Breaking the Word” turn to gold and hopefully through your continued support diamond and platinum jubilees as well.