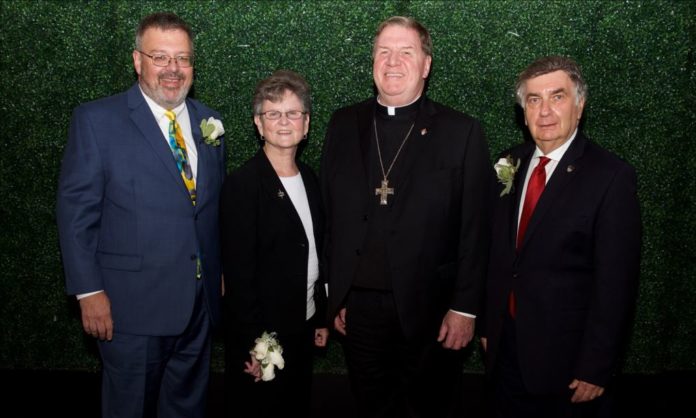 SOAR! – Support Our Aging Religious – honored our own Cardinal Joseph Tobin with the St. Katharine Drexel Award for his servant leadership and his impact on women and men religious throughout the United States. Cardinal Tobin, Archbishop of Newark, received the award at SOAR!’s New York City Awards Dinner at the New York Athletic Club last month.

The gala is a major fundraiser that provides grants to religious institutes to meet the immediate needs of their retired and infirm members. Others recognized for their leadership and contributions to the Catholic community include: Rabbi Joseph Potasnik and Deacon Kevin McCormack; and Sr. Tesa Fitzgerald, CSJ. Deacon McCormack and Rabbi Potasnik, who have co-hosted the radio program Religion on the Line on WABC in New York, received the St. Elizabeth Ann Seton Award for their long history of promoting interreligious dialogue and sharing their faith through the media. Sr. Tesa received the Fr. Victor Yanitelli Award, which is presented each year to a senior religious in the New York area to acknowledge their life of service. Sr. Tesa, a Sister of Saint Joseph of Brentwood, NY, founded Hour Children, a nonprofit in Long Island City that provides housing, mentoring and job-training for mothers recently released from incarceration.