On July 1, 2019, the Vatican announced that Cardinal John Henry Newman, Giuseppina Vannini, Maria Teresa Chiramel Mankidiyan, Dulce Lopes Pontes and   Margarita Bays will be canonized on Sunday, October 13, 2019. The announcement came in the Clementine Hall of the Apostolic Palace, during the celebration of Terce, when Pope Francis held an Ordinary Public Consistory for the Canonization of the Blesseds.

It is indeed a moment of great joy for the universal Church to witness the canonization of these five Blesseds’ who lived such holy and inspirational lives.  It has given me an opportunity to not only study about their lives but also be inspired by their holiness and their love for God and his people, especially the poor and the most abandoned.  I have briefly put together the life of each of these Blesseds’, they are not exhaustive and hopefully inspire you to know more about their lives. 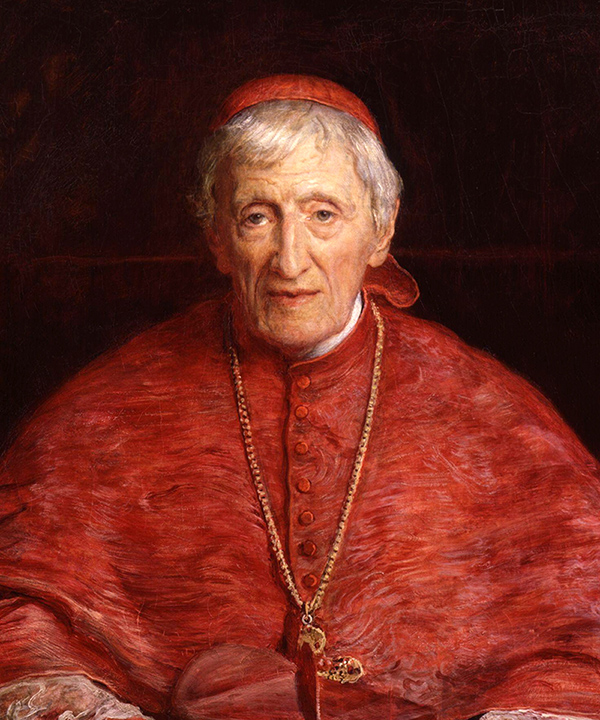 Cardinal Henry John Newman was born in London (England) on February 21, 1801, and died in Edgbaston (England) on August 11, 1890. He founded the Oratory of St. Philip Neri in the English city of Birmingham in 1848 and was rector of the Catholic University of Dublin (1851-1858). Some consider him a “father of the Church” for the next century.  He is quite likely the greatest theological thinker in the English language.

The biographical details of his life are well-known; his life spans almost the entirety of the 19th century. Newman’s life is almost evenly divided between the Anglican period and his life as a Roman Catholic. One trait that marked him from his youth, though, was a passionate search for truth and he sought after the truth with a human face. From conversion to evangelical Protestantism as an adolescent to his early adulthood as an Anglican priest and Oxford don to his maturity as a Catholic, Oratorian, and priest, he never stopped searching for truth, and shaping his life around the truth that he found.

One cannot overlook the price that Newman paid in his search for truth. His example teaches us that searching for truth is not necessarily rewarded with an easy life. In addition to the difficulties his decision to become Catholic caused in his personal life, his professional life was not excepted from troubles.

Yet the truth that Newman sought was not simply doctrinal or dogmatic, as important as those qualities were to him. Truth had a human face – that of Christ – and was incarnated in love. In any number of his sermons, Newman is concerned about externally good people who lead virtuous lives – but not out of love. He writes, “It is possible to obey, not from love towards God and man, but from a sort of conscientiousness short of love; from some notion of acting up to a law; that is, more from the fear of God than from love of him.” Newman’s faith was enfleshed by love, and only love was an adequate motive for virtue. For Newman, love leads the Christian to a new way of life.

Marguerite Bays of Switzerland, Virgin of The Third Order of Saint Francis of Assisi. 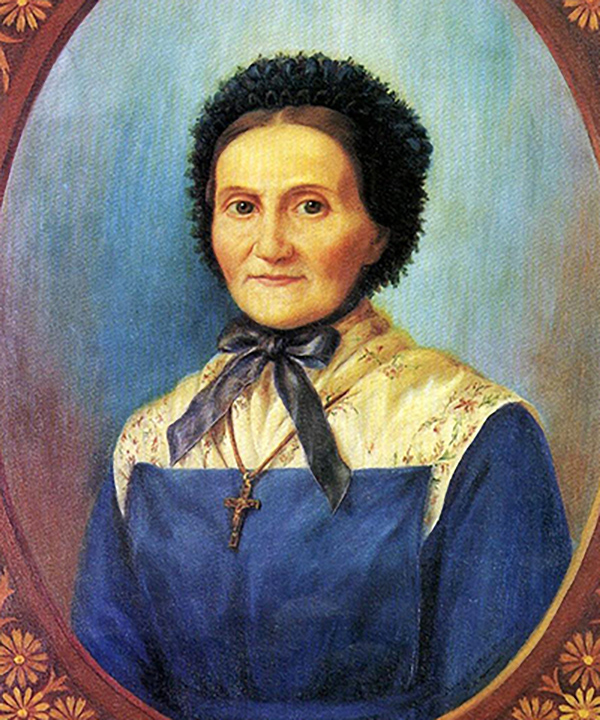 Marguerite was best recognized in her village for being a simple, heartfelt, and cheerful woman who didn’t draw attention to herself. She endeavoured to keep a simple and austere life in order to better assist the sick and miserable around her, who were often farmers displaced by the ever-increasing mechanization of agricultural toil.  It was her love of service that led to a strong identification with the charism of St. Francis of Assisi.

She felt freer to serve God if she was not a member of a religious congregation and instead joined the lay branch of the Franciscan family, the Secular Franciscan Order.  She received the stigmata at age 38 and every Friday since then would experience the pain of Christ’s Passion while entering into a mystical state of ecstasy. She died at 3:00 pm (the same hour of Jesus’ passion and death) on Friday, 27 June 1879. 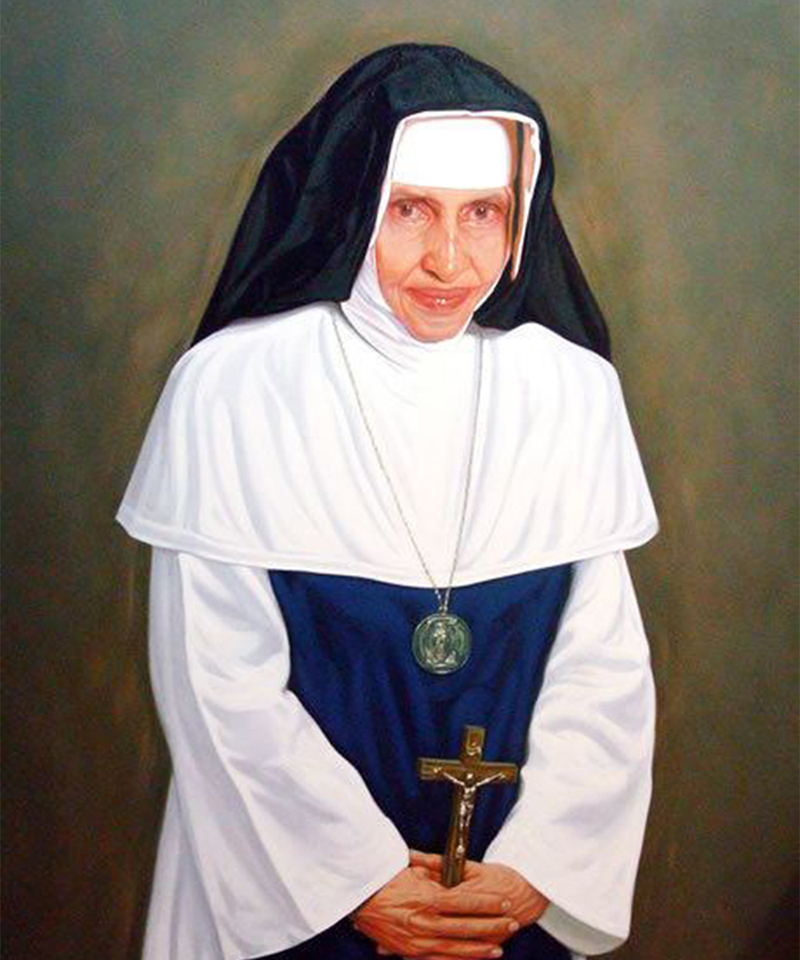 Blessed Dulce Lopes Pontes, “Mother of the Poor” and the “Good Angel of Bahia” was born in Salvador de Bahia, Brazil, on 26 May 1914. As the Missionary Sister of the Immaculate Conception of the Mother of God (SMIC), Sister Dulce taught and worked among the poor of Salvador and founded the area’s first Christian labour union and opened a public school for workers and their children.

But her most lasting legacy would be in the area of healthcare with the Charitable Works Foundation of Sister Dulce (Obras Sociais Irmã Dulce, or OSID).  This organization, founded in 1959 by Blessed Dulce with statutes drawn up by her father Augusto, is one of the foremost charitable healthcare organizations in the entire country, specializing not only in healthcare but also in education and scientific research.

Serving more than 3.5 million people each year, it is open to a broad range of people in need, including the elderly, the homeless, children and adolescents considered “at risk”, victims of addiction, and people with disabilities and deformities. And it all famously began with just 70 patients, a chicken coop, and one determined nun.

Known during her lifetime for her outstanding service to the poor, Blessed Dulce was nominated for the Nobel Peace Prize in 1988. She had the opportunity to meet with Mother Teresa once and Pope John Paul II twice – the second time as she lay in the hospital, not long before her death from respiratory failure on 13 March 1992. 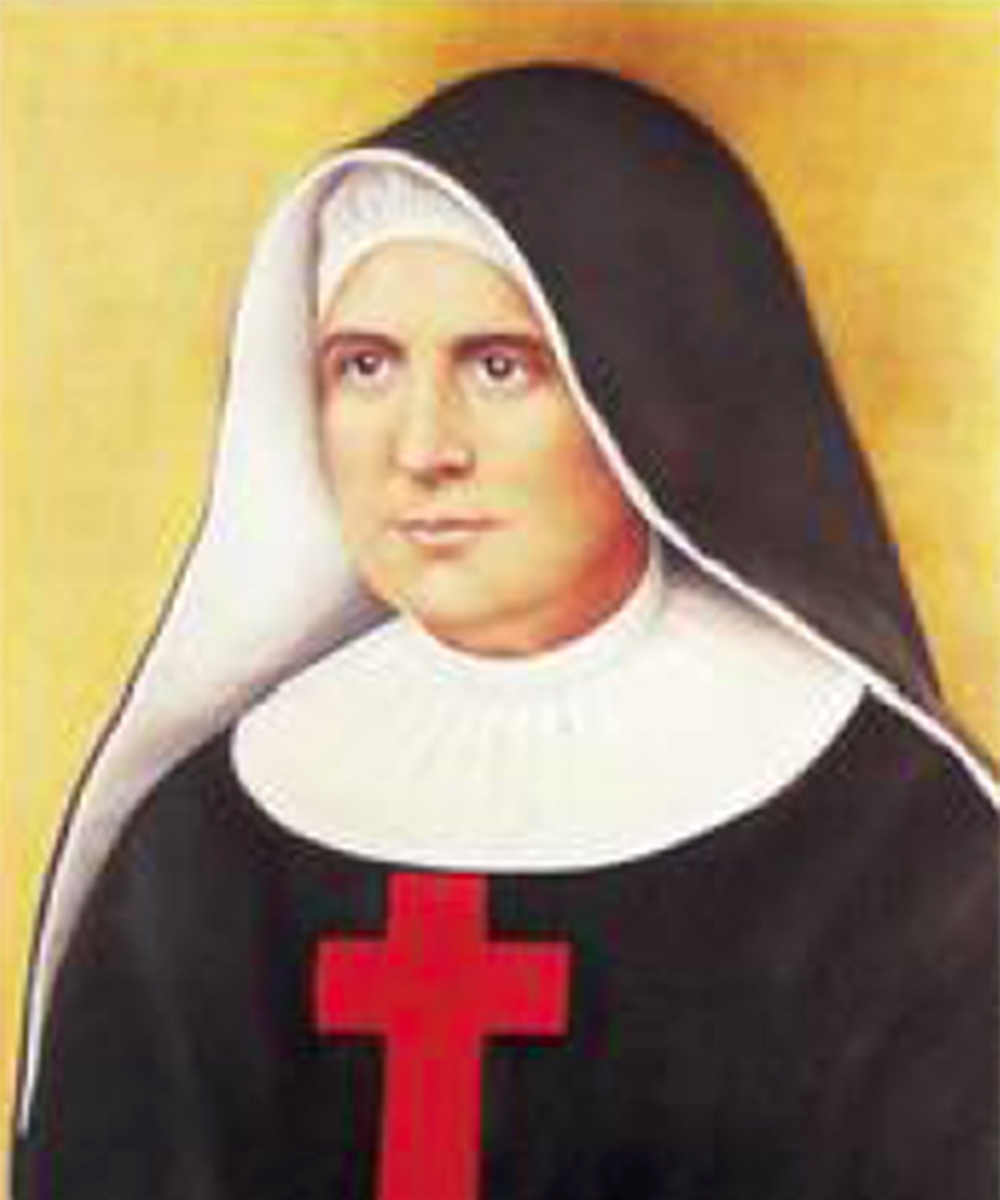 Giuseppina Vannini was born on 7 July 1859 in Rome, as the second child of Angelo Vannini and Annunziata Papi. Her father died in 1863 and her mother in 1866, so seven-year-old Giuditta and her two siblings were orphaned when they were very young. The children were separated after the death of their parents, with Giuditta going to the Torlonia orphanage under the care of the Vincentian sisters.

While discerning her vocation to the religious life Giuditta met Father Luigi Tezza at a spiritual retreat when she sought his advice in a confessional. Fr. Tezza was interested in forming an all-female religious congregation dedicated to caring for the sick.  After several weeks of discernment, Giuditta accepted Fr. Tezza’s offer, and in March of 1892, she and two companions received the scapular and the religious habit of Camillian tertiaries. She took “Giuseppina” as her religious name and was made the Superior General of the Daughters of Saint Camillus on 8 December 1895, the congregation she founded with Fr. Tezza.

The congregation began to grow, despite its poverty and initial struggles, the community spread throughout the world, having houses in France, Argentina, and Belgium. The congregation finally gained official approval in 1909.  By 1910, Mother Guiseppina’s health began to fail when she was struck by serious heart disease, and in February 1911, she died at the age of 51.

Indian Sister Mariam Thresia Chiramel Mankidiyan, Founder of The Congregation of The Sisters of The Holy Family 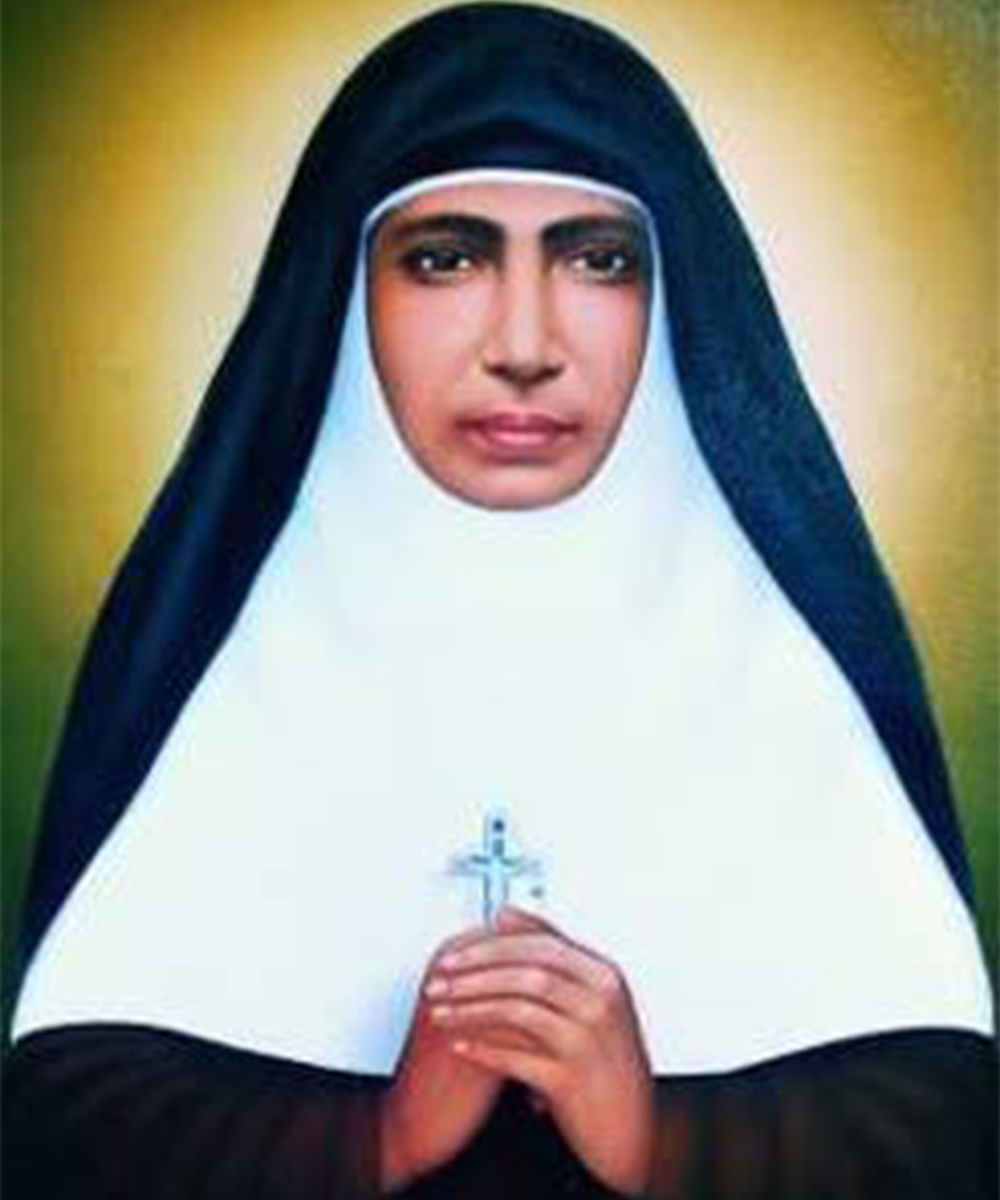 Blessed Mariam Thresia was born on 26 April 1876 as Thresia Mankidiyan in Kerala, India. Raised in the Syro-Malabar Rite of the Catholic Church, her parents named her in honour of St. Teresa of Avila, which would indicate the life of holiness and contemplation that Thresia would achieve.  She longed to live a life of contemplation, prayer, and penance in solitude, but she soon abandoned this plan, turning instead to a life of service.

Continuing to attend her parish church with three companions, she helped to clean it and decorate the sanctuary. In her love for Jesus, she wanted to help the poor, nurse the sick, and comfort the lonely. By being involved in charitable services, she selflessly served the people of her neglected village, inspired by a deep devotion to Christ.

From 1904, Thresia began to call herself Mariam Thresia in response to a vision in which she believed that the Blessed Virgin Mary had asked her to add “Mariam” to her name.  With her three companions, she formed a prayer group and an apostolate, visiting the poor and the sick, making no distinctions as to caste or religion.

In 1913, the bishop gave her permission to build a house of prayer, where she and her three companions could live like hermits, devoting themselves to austere lives of prayer and penance, while continuing their mission of service to the poor and the sick. This was the founding of her new Congregation of the Holy Family (CHF), in which Mariam Thresia was named the first superior and her companions became postulants.

They continued to minister to the sick and the poor, and they also provided for the education of girls and cared for orphaned children.  There were many spiritual experiences that characterized the life of Mariam Thresia. She was said to have received the stigmata first in 1905, and it became more visible by 1909. People gathered to watch her lifted high and hanging on her wall in the form of a crucifix every Friday.  In 1926, a falling object struck Mariam Thresia’s leg. The wound would not heal, probably due to her diabetes, and on 8 June 1926, she died in Kuzhikkattussery, India, at one of the convents she had founded.

May the lives of these holy saints inspire us to grow in our love for God and his people, by serving especially the poor and the most abandoned.