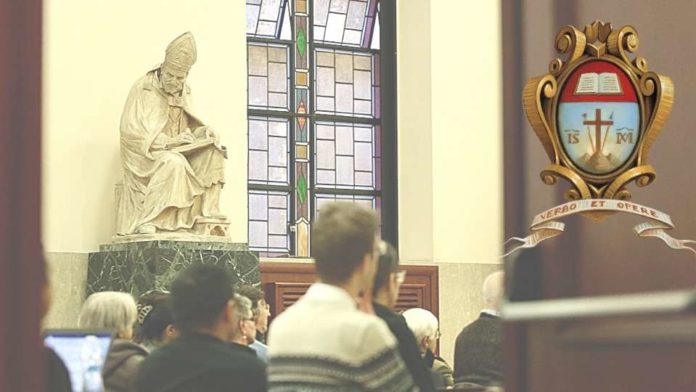 On 25 March 1957 (64 years!), the Congregation of Religious recognised the Alphonsian Academy as an “internal school of moral theology” (constituit tamquam Scholam internam publicam) under the care of the Congregation of the Most Holy Redeemer. Until today, the Accademia has been gaining its autonomy until the last recognition, thanks to the Apostolic Constitution Veritatis gaudium (VG), on 18 December 2020, to be recognised by Catholic Education as Institutum ad instar facultatis.

Recalling a bit of history, the Alphonsian Academy, Higher Institute of Moral Theology, was founded by the Congregation of the Most Holy Redeemer as a school of moral theology on 9 February 1949. The Congregation of Religious recognises it as an internal public school of moral theology, entrusted to the C.Ss.R and opened to the secular clergy and religious on 25 March 1957; on 2 August 1960, the Congregation for Seminaries and Universities, with the approval of Pope John XXIII, incorporated the AA into the theological faculty of the Pontifical Lateran University, after having legally approved its Statutes, as a Higher Institute of Moral Theology, with its own autonomy; on 22 October 1969, the Sacred Congregation for Catholic Education approved the programme proposed by the AA in the application of the Normae quaedam (20 May 1968): Specialised Licentiate (2nd cycle) and Doctorate (3rd cycle) in Moral Theology.

Based on the decree of the Congregation for Institutes of Consecrated Life and Societies of Apostolic Life, no. 1960/57 of 25 March 1957, work began on 13 April 2018 for civil recognition, a requirement before the Italian state. On 19 April 2018, the application for recognition was submitted to the Congregation for Religious. On 26 September 2018, the Congregation for Catholic Education, in response to Prot. N. 63488/18 of 26 September 2018, gave its consent for the Higher Institute of Moral Theology “Accademia Alfonsiana”, incorporated into the Lateran University, to be erected by the competent authorities a civilly recognised ecclesiastical body.

On 10 October, the Grand Chancellor, Cardinal Angelo De Donatis (N. 63488/18/GC), informed the Superior General that the Congregation for Catholic Education, on 26 September 2018, with Prot. N. 810/79 also gave its assent for civil recognition. On 21 December 2018, the Congregation for Catholic Education issued the certificate Prot. 810/79 accrediting the canonical juridical personality of the AA with which the legal representative of the same can initiate, in the Prefecture of Rome, the civil recognition of the Alphonsian Academy as an ecclesiastical entity.

On 06 June 2019, the Congregation for Catholic Education, in accordance with articles 2 and 10 of the Agreement for the revision of the Concordat between the Holy See and the Italian Republic, gave its consent to the recognition of the civil legal personality of the AA (Prot. 810/79). This document has been sent to the Ministry of the Interior and signed on 20 June 2019.

On 18 December 2020, the Accademia Alfonsiana was recognised by the Congregation for Catholic Education as an Institutum ad instar facultatis. In the new Statutes of the Pontifical Lateran University approved (5 January 2021), the Alphonsian Academy is inserted, together with the Patristicum and the Claretianum, as special research centres (Cf. VG, Ord. Art. 2, Proemio 5) to cultivate and promote the specialised theological formation, to develop scientific research and to launch students into teaching in the light of the magisterium of the Church.

Taking into account the directives of the Constitution Veritatis Gaudium and the new juridical status of the Accademia Alfonsiana, the Statutes which had already been submitted to the Congregation for Catholic Education in 2020, were revised and approved for submission on 11 March 2021 by the Council of Professors and on 18 March by the Academic Council.

The importance of being an Institutum ad instar facultatis

Veritatis Gaudium states that “an institution on which the Congregation for Catholic Education has conferred the right to confer only the academic degree of the second and/or third cycle is called an Institute ad instar Facultatis” (VG, art. 6). What does this mean?

This recognition is a reward for the commitment of the Congregation of the Most Holy Redeemer to education, giving us considerable visibility and accrediting us as a centre of the highest quality. Pope Francis himself has encouraged this recognition. In his words on the occasion of the 70th anniversary of the foundation of the Academy on 09 February 2019, he says:

Fidelity to the Alphonsian roots of your Institute now calls for an even more convinced and generous commitment to a moral theology animated by the missionary tension of the Church ‘going forth’. Like St. Alphonsus, we must always avoid allowing ourselves to be imprisoned by school postures or by judgements formulated ‘far from the concrete situation and the real possibilities’ of individuals and families. It is also necessary to guard against an ‘excessive idealisation’ of Christian life that is not capable of awakening ‘trust in grace’ (cf. Post-Synodal Apostolic Exhortation Amoris Laetitia, 36). Instead, by listening respectfully to reality and trying to discern together the signs of the Spirit’s presence, which generates liberation and new possibilities, we can help everyone walk the path of goodness with joy. The realities to listen to are, above all, the sufferings and hopes of those whom a thousand forms of the power of sin continue to condemn to insecurity, poverty and marginalisation. St Alphonsus realised early on that it was not a world to defend against, still less to condemn, but to heal and liberate, in imitation of Christ’s action: to become incarnate and share the needs, to awaken the deepest expectations of the heart, to be assured that each one, however fragile and sinful, is in the heart of the Heavenly Father and is loved by Christ even to the cross. The one who is touched by this love feels the urgency to respond by loving. [1]

Throughout these years, the Academy has tried to be faithful to its purpose: to think a moral theology in the light of the Word of God and pastoral benignity. It has not always been easy to carry out this mission throughout these times. However, the Spirit, the great helmsman, guides her, giving her the ability to read the signs of the times. Moreover, the restless spirit of St. Alphonsus continues his provocation to reflect on a more inclusive morality that touches the hearts of today’s wounded men and women. Receiving the Institutum ad instar facultatis award is a gift as we celebrate the 150th anniversary of the recognition of St. Alphonsus’ doctorate. We know well the difficulties of this process and also what it means for us Redemptorists.[2] Therefore, new paths are opening up and, with hope, as true sons of Alphonsus, we will go forward in this important mission of proclaiming the Gospel through moral theology. We cannot stop… it is the very nature of being a Redemptorist!

As everywhere else in the world, the SARS-COVID19 pandemic affected the Academy in various ways: financially, didactically, in terms of the number of students, the possibility of meetings, etc. But with the commitment to the Gospel and to the wounded world, through the pastoral zeal received from Alphonsus, it will not give up its mission but will carry it forward with faith, hope and love.

[1] FRANCISCO. Address of the Holy Father Francis to the professors and students of the Alphonsian Academy, Institute of Moral Theology. http://www.vatican.va/content/francesco/es/speeches/2019/february/documents/papa-francesco_20190209_accademia-alfonsiana.html